'It took us nine to 10 months to get the land transferred for our project in Madhya Pradesh... Things have to move faster,' says Sumant Sinha, CEO, ReNew Power (Photo: Vivan Mehra)

It's a speed of change even wind gods would approve of. All but given up for dead - especially after the government withdrew two big incentives in the 2012 budget - the wind power sector is now back in the reckoning.

Consider these facts. Suzlon Energy , a poster boy of the pre-2008 boom in the sector before it became a case study of the perils of expanding too fast, will start selling a new turbine called S111 from June that it claims produces 29 per cent more power than the conventional ones. Dilip Shanghvi, Sun Pharma chief and one of India's richest individuals, along with his family bought 23 per cent of Suzlon for Rs 1,800 crore in February.

The Indian arm of Suzlon's global rival, Spain-based Gamesa, will also introduce a new product soon. Another top wind equipment manufacturer, Inox Wind, came out with an initial public offering (IPO) of Rs 1,025 crore in March which was subscribed 18.6 times.

Why did this happen and what has now changed? It was a decision in the 2012 budget that saw the wind drop, when two key incentives for this segment were withdrawn. The first, prevalent since 2003, was the tax benefit of accelerated depreciation (AD), by which wind energy producers could reduce their taxable profit by including up to 80 per cent of the installation cost as an expense in the first year itself. The second was the generation-based incentive (GBI), a subsidy of 50 paise per unit of wind power produced, introduced in the 2011 budget. The solar segment continued to enjoy both benefits.

Investors in wind reacted immediately, and the sharp decline saw the government restoring GBI in the 2013 budget. Finally, in Finance Minister Arun Jaitley's interim budget last year, the AD scheme was brought back as well. (Developers are allowed the benefit of one of the two schemes, not both.)

The Narendra Modi government has also announced the ambitious renewable energy goal of 175 GW by 2022, which includes 60 GW of wind power, rejuvenating the segment. Orders have begun to flow faster than before. At the Renewable Energy (RE) Invest conference organised by the Ministry of New and Renewable Energy in Delhi in February, Suzlon committed itself to increasing installed capacity by 11,000 MW, Gamesa by 7,500 MW and Inox Wind by 5,000 MW. "I'm hoping we will return to profitability this financial year itself," says Tulsi Tanti, CEO, Suzlon. Tanti was once the poster boy of wind energy, but some large global acquisitions - which Suzlon could not quite handle and has since sold off - along with other setbacks, pushed it into the red and forced it to undergo corporate debt restructuring in 2013.

"The AD benefit was announced last July by which time companies had already completed their annual budgeting exercise," says Ramesh Kymal, Chairman and Managing Director, Gamesa India. "It is in the current financial year that the increase in orders is likely to be seen." Others believe the target set has made the bigger difference. "AD-based business is not a sustainable practice," says Banmali Agrawala, President and CEO, GE South Asia. "It could bring in non-serious players. But the renewable energy goals set by the government ensure there is plenty of scope for growth for companies in this sector." Devansh Jain, Director, Inox Wind, points out that his company was an exception, continuing to grow even when the market was sluggish. "India is a robust market for wind power. It has grown beyond mere tax benefits," he says. 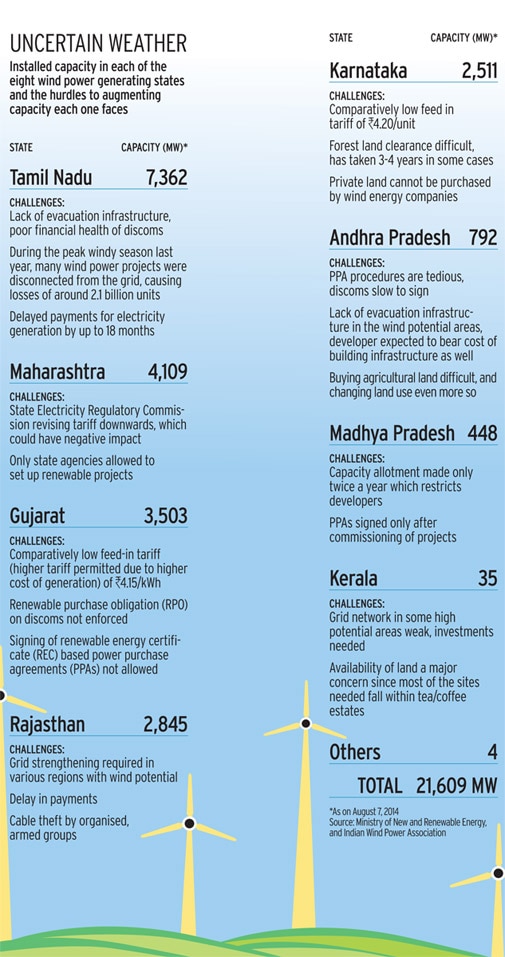 The traditional hurdle for renewable energy - its price, compared to that of conventional - has practically been overcome by wind energy, more so with the GBI provided. In most states, the tariff, at Rs 4 to Rs 5 per unit, approaches grid parity, so power producers ought not to have a problem selling. "Today, wind energy tariff is very competitive," says Kymal of Gamesa India. Wind is distinctly more economical than solar energy which, despite the steep fall in the prices of solar panels in recent years, still costs around Rs 6 to Rs 7 per unit.

The government is also sympathetically considering the suggestion that the loan tenure of wind energy players should be linked to lifespan of their wind farms. At present, even long-term loans have to be repaid in 12 years, while a wind farm lasts 25 years. "If the financing is for longer periods, the tariff can be brought down, which will make things easier for the states and ultimately for consumers," says Suzlon's Tanti.

Again, there is global opportunity available for Indian equipment makers, given that every country is scrambling to build wind energy capacity. The current global installed wind capacity is around 370 GW, but is estimated to increase by another 1,150 GW by 2020 and 2,500 GW by 2030. "India can cater to global demand because of the low manufacturing costs here," says Upendra Tripathy, Secretary, Ministry of New and Renewable Energy. Currently, China is world leader in wind energy with an installed capacity of 115 GW, followed by the US, Germany and Spain, with India in fifth position. But some barriers remain. Setting up wind farms calls for sites where wind speeds are high and basic infrastructure, both to transport the elaborate equipment used - towers, blades and more - to the farm and transmit the power produced to the grid, exists. So far only eight states - Tamil Nadu, Maharashtra, Gujarat, Rajasthan, Karnataka, Andhra Pradesh, Madhya Pradesh and Kerala - have such sites and infrastructure available.

Equipment providers, who set up the wind farm before the power producer takes over, chafe at the limitations. "There are efforts on to widen the wind power base, but that will require technological innovations as well as better infrastructure," says Gamesa's Kymal. "It is challenging to transport equipment beyond a certain size on Indian roads." Similarly, extensive additions to transmission infrastructure are required.

Land acquisition is a problem for most new projects - and wind energy ones are no exception. "It took us nine to 10 months to get the land transferred for our project in Madhya Pradesh," says ReNew Power's founder and CEO Sumant Sinha. "The local community had no objections. It was just the government offices which took so much time. Things have to move faster."

To encourage clean energy, every state government has set renewable purchase obligations (RPOs) - it is mandatory for state discoms to buy five to 10 per cent of their power from renewable energy providers, even if it costs them more than conventional power does. But in many states, the RPO is not enforced. "Andhra Pradesh and Madhya Pradesh are RPO-compliant and have seen a lot of addition of wind generation capacity in recent years," says Anil Sardana, CEO, Tata Power. The clear implication is that other states are not. "Even when states abide by RPOs, they just meet their targets and don't go beyond that," says another clean energy developer who prefers not to be named.

If central policy has been inconsistent, so has that of some states. Tamil Nadu, for instance, is the leading wind power state in the country with an installed capacity of 7,362 MW, but one of its decisions in 2013 did the segment immense harm. The government directed wind players to reduce their supply to the grid during a high wind season. 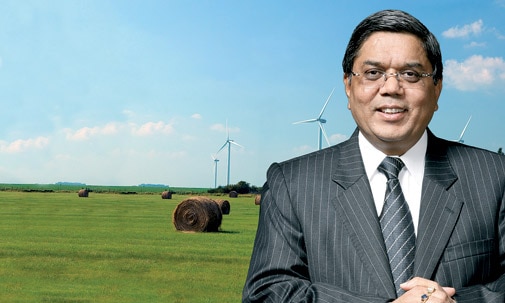 'If the financing is for longer periods, the tariff can be brought down, which will make things easier for the states, and ultimately for consumers,' says TULSI TANTI, CEO, SUZLON.

Wind power has limitations - it peaks during monsoons and at nights, when the demand is low. Predictability of output and storage are also issues, which is why state load dispatch centres prefer other power. Solar power, in contrast, is its strongest during the day, which has led to speculation that once the price of solar power achieves grid parity, it may outstrip wind. "Given the pace at which solar has been getting cheaper, its tariff could well become less than that of wind in the next 24 months," says Vineet Mittal, Vice Chairman of green technology company Welspun Renewables. "From then on, I expect more solar-based units to come up."

At the February RE Invest conference, renewable power producers committed themselves to installing 166 GW solar energy but only 45 GW of wind energy. A number of leading wind energy players, including Suzlon, Gamesa and ReNew Power, are also getting into solar. "India has more sunshine than wind, hence solar energy is the way forward," says Gamesa's Kymal. Blending the two may be the best solution.

More steps are on the anvil to encourage renewable power. Power Grid Corporation, for instance, has a Rs 43,000 crore proposal to create a green corridor to make it easier for renewable energy to flow into the national grid. "We understand the infrastructure issues, and are working on the green corridor solution," says Minister for New and Renewable Energy, Piyush Goyal.

Many states are also working towards a multi-year tariff (MYT) policy, which will keep tariffs within a range. "Gujarat has an MYT policy, so does Madhya Pradesh. Rajasthan, Maharashtra and Andhra are working towards it," says Inox Wind's Jain. "This gives us confidence to plan things."

Impact investment funds are on the rise in India