Seven years ago, when the US and Europe were hit by the financial meltdown after the collapse of Lehman Brothers, the rest of the world was debating the decoupling theory. Many in India believed the local economy would not feel a huge impact as it was consumption-oriented and did not rely much on exports. But they were proved wrong as India's economic growth also slowed. Domestic factors such as governance issues, political instability and scams also contributed to the slowdown.

Undoubtedly, India today operates in a more integrated world. The integration is not only restricted to goods and services but also extends to financial integration and the corporate sector. Many big Indian corporate houses have taken the biggest bets abroad where growth of their companies depends upon the revival of the world economy. Similarly, global corporations have big operations in India. In fact, the financial meltdown of 2008 is a reminder of the way global growth could engulf a domestic consumption-oriented economy like India.

At a time when the world is struggling to recover, India is showing a very divergent trend. This is thanks to the new series to calculate gross domestic product (GDP) that revised economic growth from 4.7 per cent in 2012/13 to 5.1 per cent. Similarly, GDP growth for 2013/14 was revised from five to 6.9 per cent. India has emerged as the world's fastest growing economy with its GDP expanding at 7.5 per cent in the fourth quarter of 2014/15, compared to Chinas 7.4 per cent. India, however, ended the fiscal with 7.3 per cent. The government has projected GDP growth at 8.1 to 8.5 per cent for 2015/16. But a fortnight ago, ratings firm CRISIL cut its GDP growth predictions from 7.9 to 7.4 per cent for 2015/16 taking into account the likelihood of a weak monsoon. "A second straight year of weak monsoon will decrease the efficiency of India's irrigation ecosystem and hit agricultural output and farmers adversely. This will also have negative implication on rural demand," CRISIL said.

Can India escape the global slowdown?

China's growth is expected to fall to 6.8 per cent in 2015 from 7.4 per cent last year. The euro area is still not out of the woods. Greece, Russia and Ukraine have the potential to derail any future growth momentum in the euro zone. The US has also reported disappointing first-quarter GDP numbers as compared to healthy growth in the preceding three quarters. There are now doubts on a US recovery. The International Monetary Fund (IMF) has already slashed its forecast for the US economy. Both the IMF and the World Bank have advised the US Federal Reserve to keep on hold its first interest rate increase in close to a decade until next year. Many say the US recovery was because of the asset purchases under the quantitative easing program and any move to increase rates will send it back to a recession. 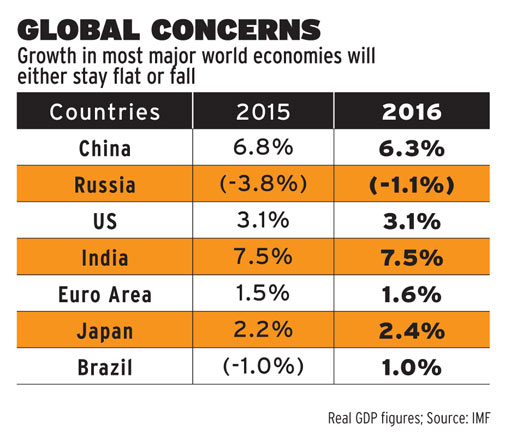 A weak global economy would impact India's growth as well, particularly exports. "There is a positive correlation between growth in India's exports and growth in the world economy," says Madan Sabnavis, Chief Economist, Care Ratings. Exports in 2015/16 are likely to be flat, around $310 billion achieved in the previous fiscal year. "Our exports get impacted if the US, Europe, China and East Asia slow down," adds Sabnavis.

Many say the US recovery is a double-edged sword. This is because while it would boost India's exports, it would also put pressure on the stock, debt and currency markets as foreign funds would move their money out of emerging markets. The outflow from equity and debt markets in May has already led to the rupee depreciating from 60 to 64 against the US dollar. Reserve Bank of India Governor Raghuram Rajan has often warned that unconventional monetary easing poses risks to growth. "It is not an industrial country problem, nor an emerging market problem. It is a problem of collective action. The sooner we recognise that, the more sustainable world growth we will have," he said.

Economists are also not buying the growth estimates of 7.5 to 8.5 per cent for 2015/16. Economists say they can believe in the numbers if the government says GDP growth was 12 to 13 per cent in the booming five-year period from 2003 to 2008 under the new series. "Then the question arises what has brought us down from 12 to 13 per cent to 7.5 per cent," wonders an economist with a leading foreign firm. "Are we addressing those constraints?"

Why are states keeping citizens under darkness?