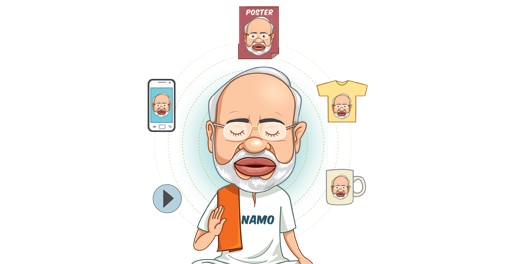 Forget old-fashioned posters. The real game-changer in Narendra Modi's election campaign may well be mobile apps. As the Bharatiya Janata Party's (BJP) prime ministerial candidate cosies up to voters, the political battleground isn't just littered with typical paraphernalia such as trinkets, masks and apparel with Modi's name or face on them. India's digerati has also developed a host of innovative high-tech Modi-related products such as a NaMo smartphone, Modi-related phone apps, Modi games and even Modi ring tones.

Modi himself has been using technology pretty effectively for some time. He's a prolific tweeter with 2.48 million followers on Twitter and used 3D technology to appear at more than one political rally simultaneously during assembly elections last year. But the apps and games are not developed by the BJP or Modi's campaign team. China-based Smart Namo HK Ltd, for example, has launched an Android smartphone called Smart Namo, short for Narendra Modi as well as Next-generation Android Mobile Odyssey. The company's CEO, Ammeet Desai, says the phone will be preloaded with Modi-related apps that contain videos, quotes, wallpaper and news. It's a new product that seeks to support Modi's campaign. Smart Namo has shipped 12,000 phones so far and is in the process of sending another 35,000 pieces. "In China, we see many companies come out with commemorative products such as watches, memorabilia of national leaders. We wanted to be supportive to the growth model campaign of Narendra Modi, as we are from Gujarat," Desai says in an email.

{mosimage}The content of the apps and games is mostly political. The Android platform has more than 25 Modi-related apps with everything from his autobiography and videos of his speeches to news updates. Modi's official app is divided into sections including news, speeches and his biography while NaMo's Pocket Book is another app with Modi's speeches.

Apart from apps, the Google Play store also has games based on the NaMo theme. Super Namo challenges players to survive through the ups and down of politics. In another game called Modi Run, similar to the mega-hit Temple Run, Modi passes through states, collects votes and finally becomes prime minister."We felt Modi is popular among our target users in India and would get positive feedback. It's purely business and not done as a political statement,"said Kumar Mettu, CEO of US-based Dexati which developed the game. "With the huge popularity of Modi among youngsters, we felt this game will attract a good number of users."

The BJP has also dipped into digital campaigning. It is reaching out to people who only use feature phones as well. Arvind Gupta, head of the BJP's national IT cell, says the party's communication strategy is "platform agnostic". He said more than 200,000 feature phone users have called to listen in to Modi's speeches live and most of them also receive his tweets via SMSes. "We are reaching out to people in the best manner, and giving it to them in a way that they consume information," he said.

Some analysts are sceptical about using mobile phones for political campaigns. "Mobile penetration is high but the penetration of his message isn't. A construction worker has a phone for communication, not to listen to his political message," says Achyut Yagnik, an Ahmedabad-based political scientist and founder secretary of The Center for Social Knowledge and Action. "The rural and urban poor are not touched by his gimmicks."

Bhagat Singh Kranti Sena, a Delhi-based group, has launched a "Modi-fying India" campaign with Modi T-shirts and coffee mugs. "We have sold approximately 3,500 T shirts so far,"said Tajinder Pal Singh Bagga, convenor of  BSKS. Sources say the party campaign plans to launch a range of Modi merchandise including his signature half-sleeved kurta. But the party declined comment. "The strategy is not to tell anything to the press," says BJP spokesperson Prakash Javadekar.