When Arun Kumar cashed out his investment in Everonn Education seven years ago, many wondered whether he would be better off as an investor rather than an entrepreneur. After all, Kumar's returns from the money he put in as an angel investor in the education services provider, at Rs 100 crore, were five times his net worth in the company he had founded - Strides Arcolab.

But, on February 28, Kumar proved he was equally adept at creating new businesses as well when he announced the sale of Strides's injectable medicine business, Agila Specialties, to US drug giant Mylan Inc.

What is his investment strategy? "I am dispassionate about my investment and I have been good with timing," he told Business Today.

Son of a government official, Kumar hails from Kerala and grew up in Ooty. He was just 21 years old when he set out for Mumbai in 1982 to seek his destiny. In his initial days, he worked with the Bombay Drug House and British Pharmaceutical Laboratories. He set up Strides at Vashi, Navi Mumbai, in 1990. The company expanded rapidly between 1996 and 2006, and piled on debt.

"We invested with very low bandwidth of management and finances and we paid the price of doing things wrongly," admits Kumar, who is also Strides's Group CEO. "We realised the importance of doing fewer things better than doing a lot of things." 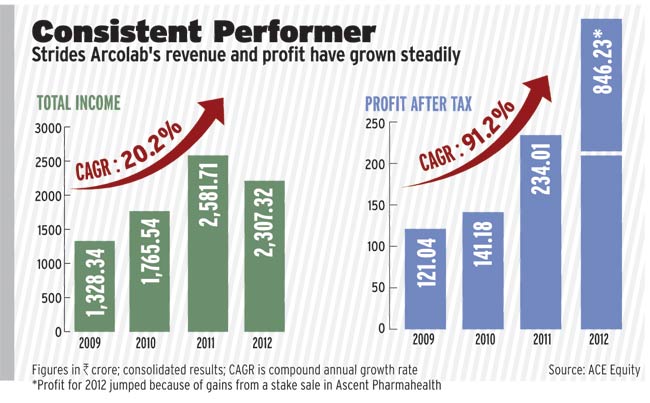 What has come in handy is Kumar's knack of making money from his investments.

"Arun is unconventional and likes to buck the industry trend," says an associate who has known Kumar for more than two decades. "He picks a niche area to operate, creates value in that and exits at the right price at the right time."

The Agila deal proves just that. The sale, at more than $1.6 billion (about Rs 9,000 crore), is one of the biggest deals in the Indian pharmaceutical sector in recent times. Strides will get an additional $250 million if it meets certain undisclosed conditions.

Kumar says the investor community is being guided to consider $1.725 billion as the potential final payment. The deal is valued at 18.7 times Agila's earnings before interest, tax, depreciation and amortisation for 2012.

The importance of Agila can be gauged from the fact that the deal size is more than the market value of Strides and also higher than Mylan's $1.3 billion revenue from the Asia-Pacific region.

"The deal is based on Strides's research, development and manufacturing capabilities and its marketing strengths in some emerging markets," says Ajit Mahadevan, Partner, Life Sciences, Ernst & Young India. The deal has also caught the attention of some industry leaders. "It is a good exit for the promoters and a good fit for Mylan," says G.V. Prasad, Vice Chairman and CEO of drug maker Dr Reddy's Laboratories.

Kumar, who when not at work would rather experiment in the kitchen and collect paintings, says the money made from the Agila deal will be used to retire debt and invest in new businesses. The nascent biologics business will get $100 million while $250 million will be used to repay debt. Shareholders will get between $700 million and $800 million.

The Everonn and Agila deals are no exceptions. In January 2012, Strides sold its 94 per cent stake in Ascent Pharmahealth, a subsidiary with operations in Australia and Southeast Asia, to Watson Pharmaceuticals for $393 million. Strides had invested $75 million in Ascent, says Kumar.

Kumar's focus since then was on injectables, the key business of Strides Arcolab, which attracted Mylan. The US company says the global generic injectables market is likely to grow at a compound annual rate of 13 per cent from 2011 to 2017. The combined portfolio of Mylan and Agila will cater to about 70 per cent of regulated market demand for injectables, it says.

Analysts say injectables, the business Strides is selling, is an interesting segment, partly because making injections is more difficult than making tablets. Plus, this is a product more targeted at hospitals than individuals. This means that there are fewer players in the market. The upside is that when innovator products go off patent, prices of generic versions do not fall drastically. The size of the injectables market is much smaller than that for oral drugs. In the global pharmaceuticals market of around $800 billion, the size of generic injectables would be one per cent, says Kumar. But, as Mylan said, the segment is growing at a much faster pace.

But if Kumar is so investment savvy then why did the stock market give a lukewarm response to the Agila deal?

Shares of Strides fell 18 per cent following the announcement. Analysts feel the drop was because Kumar sold his crown jewel. Agila was Strides's most profitable business and accounted for nearly 60 per cent of total revenue. What remains with Strides now are biologics and pharmaceutical oral dosages businesses. While the company gets no revenue from biologics, the business it is investing in now, sales from oral dosages are less than Rs 1,000 crore.

Still, Kumar is unperturbed. His goal now is to push the pharmaceutical products and biologics businesses. He is focusing on growing in Africa, like he did in Australia. His plan is to expand the oral pharmaceuticals business and sell prescription drugs in Africa. He is also setting up a biologics facility in Malaysia with plans to make it operational by the end of 2014.

"The business that is left is growing at a brisk pace, so we should be able to catch up this lost turnover very shortly," he says. "We have a track record of identifying niche areas, difficult products and excelling in that."

IT firms need to guard against class action suits