India's and the world's most talked about CEO in October 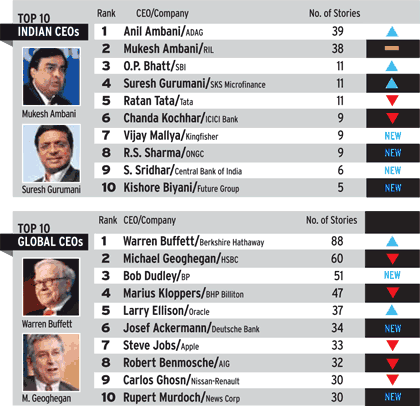 The Ambani brothers occupied the top two positions on our chart. Anil Ambani was in the news for the collapse of his group's reported negotiations with the UAE-based Etisalat for an equity stake in Reliance Communications. Both brothers were also in the limelight for detailing the investment plans of their group companies. While Anil outlined investments of nearly Rs 1,25,000 crore for his different ventures, Mukesh shared the investment plans of Reliance Industries in BP's Vietnam assets.

The spat at SKS Microfinance, which led to the ouster of CEO and Managing Director Suresh Gurumani, saw near-saturation coverage in the pink dailies. The media reported the sacking as a "power struggle" between Vikram Akula, the founder of SKS, and Gurumani.