Change is in the air for India's top-tier IT companies

There have been a number of senior executive transitions in some of India's top-tier IT companies in the last two-and-a-half years. Not all were performance related. The changes come at a time when the industry has been hit by a slowdown in advanced economies. Ashok Vemuri
August 28, 2013: Ashok Vemuri, board member of Infosys, quit.
Where he went: iGate, where he is now the CEO, succeeding Phaneesh Murthy.
What Infosys lost: An articulate and aggressive executive, a potential CEO.
What iGate gained: An executive with deep knowledge of the US market and experience in scaling.
Infosys stock on Aug 28, 2013: Rs 3,120.30
Infosys stock on Sep 20, 2013: Rs 2,995.55 Kris Gopalakrishnan
August 21, 2011: Kris Gopalakrishnan moved out of the CEO role at Infosys.
Where he went: Became the company's Executive Chairman. S.D. Shibulal was named CEO of Infosys. Gopalakrishnan was re-designated Vice Chairman after N.R. Narayana Murthy returned as Chairman.
What infosys lost: A founder CEO who had been able to keep the company's senior flock together.
Infosys stock on August 22, 2011: Rs 2,194.05
Infosys stock on Sep 20, 2013: Rs 2,995.55 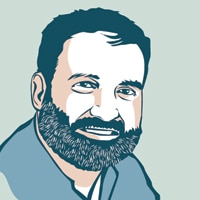 Mohandas Pai
April 15, 2011: Mohandas Pai, board member of Infosys, quit.
Where he went: Manipal Global Education Services where he is now the Chairman.
What Infosys lost: A thought leader, with people expertise, a financial wizard.
What Manipal gained: An executive who knew everything about scaling a company, creating its physical infrastructure and intellectual assets.
Infosys stock on April 15, 2011: Rs  2,988.80
Infosys stock on Sep 20, 2013: Rs 2,995.55