Finance Minister P. Chidambaram is busy undoing his predecessor's tax legacy. He is taking the much-needed policy initiatives to bridge the trust deficit with foreign investors.

Finance Minister P. Chidambaram
Sanjiv Shankaran
Four weeks into his third stint as union finance minister, Palaniappan Chidambaram chose to be unexpectedly candid. "DTC (Direct Taxes Code ) requires a fresh look," he said while winding up a brief press conference in New Delhi on August 28. The comment went a long way in explaining a chain of events since Pranab Mukherjee quit as finance minister end-June. Indeed, it is slowly becoming obvious that India's direct tax policy framework, evolved in the last three years under Mukherjee, is in the process of being upended.

DTC seeks to consolidate and amend laws relating to all direct taxes and was expected to come into effect from April 2013. It was Mukherjee who introduced DTC in Parliament in August 2010 and spent nearly two years shepherding it through the legislative process. The contentious General Anti Avoidance Rules (GAAR ) proposals too had originally been proposed under the DTC. 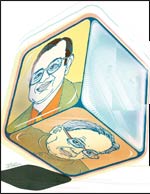 Four days after Chidambaram's press briefing, the process of overhauling the tax policy gained momentum. The four-member committee on GAAR - headed by Parthasarathi Shome, former director and chief executive of New Delhi-based economic think tank, ICRIER - submitted its draft report to the finance ministry. The report got the thumbs up from industry lobby groups, CII and FICCI.

Why? "Most of the demons in GAAR have been exorcised," says Sunil Jain, partner at legal consultancy J. Sagar Associates. The committee's recommendations have neutralised most of the contentious proposals of Mukherjee's.

GAAR is a direct tax policy measure which seeks to deter tax avoidance and prevent abuse of legal loopholes by companies, particularly in international transactions. Tax avoidance, as long as it is done without violating laws, is not illegal. The GAAR proposals deal with a grey area where companies follow the law, but tax authorities feel the underlying spirit has been violated with the intent of sidestepping taxes.

It is slowly becoming obvious that Indias direct tax policy framework, evolved in the last three years under Mukherjee, is in the process of being upended"

However, GAAR is a tricky weapon of deterrence - tax officials have to take a call on the motives of the taxpayer. There is thus ample scope for harassment. When Mukherjee introduced the GAAR legislation in Parliament in March 2012, the reaction from foreign investors was so hostile that he deferred it by a year. Prime Minister Manmohan Singh functioned as finance minister for a few weeks after Mukherjee's departure. During that period, he asked Shome, who had once served as advisor to Chidambaram in the finance ministry, to head a committee that would revisit GAAR. Shome's first draft was made public on September 1 and comments have been sought before its recommendations are decided on at the end of the month. The essence of the report is at odds with the Mukherjee-era approach to direct tax policy.

The Shome report acknowledges that India cannot take foreign capital for granted and will have to compete with others for it. Starting from there, the recommendations, inevitably, are designed to mitigate investors' fears and make India's tax policy attractive to them. They suggest implementation of GAAR be pushed back by three years as tax authorities have not yet been trained to use it judiciously. It accepts the need to respect tax treaties and cautions against bypassing them through domestic legislation.

This will safeguard India's existing tax treaty with Mauritius, which accounts for 40 per cent of foreign direct investment in the country. By all accounts, Shome's approach converges with that of Chidambaram's.

On the day the first draft was made public, Chidambaram expanded Shome's role by asking him to take another look at what was arguably Mukherjee's most controversial tax legacy: a retrospective amendment to tax cross-border transactions like the one in which telecom company Vodafone bought a majority stake in an Indian company in 2007. The Supreme Court ruled that the transaction was outside the purview of Indian tax authorities.

"There's suddenly a change in thinking in North Block (the seat of the finance ministry) insofar as the tax policy is concerned," says Mukesh Butani, Chairman of consultancy firm BMR Advisors, who also deposed before the Shome committee and was an external member of a government working group on GAAR during the Mukherjee era. Chidambaram has already announced there will be no drastic move to tax Vodafone even though the retrospective amendment gives him the right.

His moves to undo his predecessor's approach to direct tax policy have a compelling economic context. One of the shortcomings of Mukherjee's policy was that he let different arms of the finance ministry function in silos and tax policy became hostile to foreign investment just when India was about to run up a record current account deficit (CAD) - the excess of imports over exports - which can only be bridged through foreign investment or by the government dipping into accumulated foreign exchange reserves. "The macro issue now is that we have a very large CAD," says D.K. Srivastava, a member of the 12th Finance Commission and now chief policy advisor at Ernst & Young. "It can be financed in the short-run only by significant increase of inflows into the country."

Chidambaram is taking the much-needed policy initiatives to bridge the trust deficit with foreign investors.