News
Magazine
Focus
Why the rupee is at risk of depreciation

Why the rupee is at risk of depreciation

China's slowdown has hit at a time when US is showing signs of recovery. As a result, rupee suffered a 4.5 per cent depreciation since January 2015. But, should India worry if a currency war kicks off?

One year ago, the Russia-Ukraine conflict had put the global financial markets in a tizzy, sending shivers down the spine of currency investors. The Greek crisis, which had thrown the currency markets out of gear almost six years ago, also came back to haunt the markets three months ago, but a last-minute bail out by the Eurozone countries somewhat salvaged the situation. Now, Asian economic powerhouse, China, is the epicentre of a fresh crisis that has rattled the currency and stock markets the world over, with its decision to devalue the yuan.

And China is no Russia, Ukraine or Greece. "It consumes half the world's base metals. Its share of iron ore, for example, is at 70 per cent, steel at 50 per cent and oil at 10 per cent (of the total global demand)," says Seshagiri Rao, Joint Managing Director, JSW Steel. The world's second largest economy, after the US, has been a growth engine during the past decade, surging ahead with 10 per cent-plus growth. Now that the world has created huge capacities in the commodity space to meet Chinese demand, the Asian giant is growing at almost half its earlier growth rate.

The saying goes: If China sneezes, the world catches a cold. And, the biggest consumer is already creating ripples in the commodity market. The crash in prices is making matters worse for many export-dependent economies, as foreign investors are exiting in hordes.

China's slowdown has hit the world at a time when the US is showing signs of a recovery, translating into a stronger dollar. As a consequence, Brazil's currency has depreciated 33.9 per cent since January 2015, Russia's rouble deflated 25 per cent, and the Indian rupee suffered a 4.5 per cent depreciation. However, China is not going to sit idle as it faces the worst-ever slowdown. It has built a large economy on an export-led manufacturing model, which contributes almost 30 per cent to the country's gross domestic product (GDP).

What is worrying the world's economy, however, is the drastic 4 per cent devaluation of the Chinese currency, which always had a fixed rate vis-a-vis the US dollar. In a challenging economic environment, the devaluation by China has the potential to set off an all-out currency war, with every country trying to adjust its currency to remain competitive in the exports market. "A gradual depreciation in the Chinese currency cannot be ruled out," says Prashant Jain, currency analyst, India Forex Advisors. "It is also using other tools, such as export incentives, tax sops and low interest rates, to remain competitive in the international market," he added.

But, should India worry if a currency war kicks off? Perhaps. One, China, and many other countries with weak currencies, will start dumping products into India. Two, exporters will feel the heat as they may not be able to compete in the global market. In recent times, Indian exports have plunged due to a slowdown in the US and Europe, the two largest markets it caters to. India competes directly with China in the global exports market in textiles, ready-made garments, gems and jewellery, base metals and engineering goods. Exports contribute almost 20 per cent to the country's GDP. But Reserve Bank of India Governor Raghuram Rajan has made it clear that he was not in favour of depreciating the rupee further. Experts argue that exports haven't jumped despite a gradual depreciation of the rupee from 54 to a dollar in 2011/12 to 62 in 2014/15. "What we need is higher productivity of labour, tax sops, low cost of capital and better infrastructure, " says an expert.

Jain says India cannot afford to depreciate its currency further because of high inflation and, consequent, higher imported inflation. In addition, India's hands are tied as it cannot cut interest rates aggressively or offer tax sops because of fiscal constraints. 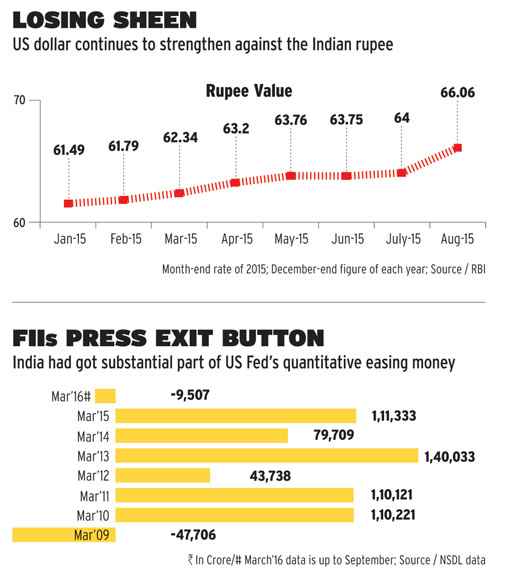 There is another danger for emerging markets, including India - the much-anticipated interest rates hike in the US. The Federal Reserve meeting is slated for September 16-17.

The world's largest economy had kept its short-term rates at near-zero levels since the financial crisis of 2008 to pump up demand in its economy. Short-term rates had fallen from 5.25 per cent in September 2007 to 0.25 per cent in December 2008. This was supplemented by a bond buying programme, or quantitative easing (QE), which released a massive $3 trillion into the US economy. According to an International Monetary Fund (IMF) estimate, emerging markets have received $4.5 trillion of gross capital flows between 2009 and 2012, out of which India received about $470 billion. "This money will now head back to the US as interest rates are set to move northwards," says a treasury dealer. The outflow of dollars from emerging markets will have far-reaching consequences on their respective currencies. In 1997, The East Asian currencies, including that of Thailand, Philippines, Malaysia and Indonesia, had witnessed massive depreciation after foreign institutional investors (FIIs) exited the stock markets en-masse. Two years ago, when the US Fed had decided to end the bond buying programme, emerging market currencies had also come under pressure. The rupee, too, had depreciated to 68 a dollar with foreign investors deserting the Indian markets. Now that the US is all set to hike interest rates, India must be prepared to hedge the rupee against the move.

There are already signs of foreign investors pulling out of the Indian stock market. In the first five months of the current fiscal, it has seen a net outflow of close to Rs 10,000 crore. Last year, net investments by FIIs were to the tune of Rs 1.1 lakh crore. Over the last six years, after the US started QE, the Indian stock market has received average net inflows of over Rs 1 lakh crore every year. "Certainly, there will be pressure on emerging markets after the US Fed rate hike. But the money will move out more from weaker economies," says D.K. Joshi, Chief Economist, Crisil.

India is growing at 7 per cent, but it needs to do a lot more. The RBI's decision to ease interest rates at a time when the US is mulling rate hikes, will translate into narrowing the difference in interest rates between the two countries. This would have a direct impact on non-resident fixed deposits and the debt market, which has witnessed a big jump in foreign inflows in the past 6-7 years due to higher interest rate differential. In 2014/15, the debt market inflows was at Rs 1.66 lakh crore.

If FII money leaves the country, the rupee will weaken against the dollar, and India might have to take several unpopular measures to stem the dollar outflow. Rajan has reiterated that India has sufficient foreign exchange reserves ($350 billion). However, if there are external shocks, it might be difficult to protect the Indian currency following the huge speculative bets. Last week, Kaushik Basu, an economist at the World Bank, had said that India's foreign exchange reserves are not enough in case an exchange-related issue breaks out. Inflation, or imported inflation, as a result of oil imports during a currency depreciation, might create another stumbling block for the Indian economy.

However, a section of experts says it is not all gloom and doom for India. Unlike other commodity dependent economies, India is in a much better position because it is a consumption-driven economy. Says Keki Mistry, Vice Chairman and CEO, HDFC: "The economy has been growing robustly, fiscal and current account deficit is under control, inflation is down and the country has sufficient foreign exchange reserves to take care of any eventuality. India just needs to be a little more articulate in highlighting its strengths."