Events of the fortnight and upcoming

Long Live the Monk: Steve Jobs redefined the way we look at computers, music and communication through an unwavering self-belief.

Long Live the Monk: Steve Jobs redefined the way we look at computers, music and communication through an unwavering self-belief.
CORPORATE

Moody's Investors Service downgraded the stand-alone rating for state-owned State Bank of India, the country's largest lender, citing "modest" capital and weakening asset quality. Salt for SBI's wounds came when the rating agency reaffi rmed the rating for ICICI Bank, the private sector bank which is the secondlargest lender. SBI has doubled its overseas borrowing target to $10 billion. The rating cut could hurt.

After a decade of strike-free operation, labour unrest is refusing to let go of Maruti Suzuki this year. The on-again-off-again strike resurfaced on October 7 as this magazine went to press. The festival season is when car companies rake it in. But this year's window is being slammed shut on Maruti as its production stays low. The rising waiting periods on its cars is small consolation. With burgeoning alternatives, consumers may get impatient before long.

Vijay Mallya
The Chairman of Kingfisher Airlines, Vijay Mallya, has announced the closure of his low-cost aviation business. Mallya acquired low-cost carrier, Air Deccan, from G.R. Gopinath in 2008 and rebranded it as Kingfisher Red. Mallya said he would focus on the full-service offering, but increase economy seats. Rising jet fuel prices and a weakening rupee are hurting, and Kingfisher has accumulated debt of around Rs 5,500 crore. Gopinath sounds far from happy when he says: "You cannot be embarrassed about your brand being low-cost."

Exports rose 44.25 per cent to $24.3 billion in August, while imports went up by 41.82 per cent to $38.4 billion. This leaves a trade deficit of $14 billion. But the worry lines came from the HSBC Markit Purchasing Managers' Index. which in September was at its weakest in two-and-a-half years.

While foreign direct investment in multi-brand retail remains contentious, the government may remove the ceiling for single-brand retail. "It is under consideration," Industry Secretary R.P. Singh told Reuters. India currently allows 51 per cent FDI in single-brand retail and 100 per cent in wholesale operations. Waiting in the wings to tap India's 1.2 billion population are Wal-Mart, Carrefour and Tesco.

The Cabinet has approved a bill directing coal mine owners to share 26 per cent of profits with local communities and other mine owners an amount equivalent to royalties. This is expected to ease land acquisition and quicken the pace of development, but industry is worried over the rise in business costs. Among the projects stuck because of local protests is Posco's steel plant in Orissa, which involves the biggest foreign direct investment in India at $12 billion.

$127 bn, or 5.7 per cent, has been the rise in advertising in the second quarter of this year, compared with 8.9 per cent in the first three months. According to Nielsen Holdings NV, Asian countries registered a 9.7 per cent increase in ad spend. Sixteen of 36 major markets, mainly in Europe, have reported a dip. Advertisers are looking for new avenues of growth, including digital marketing.

$5.8 bn is how much India spent on arms purchases in 2010, topping the list of developing countries. Although Russia is the favoured supplier, India also acquired arms from Israel, France and the US, according to a US Congressional report. Global arms transfer pacts in 2010 amounted to $40.4 billion. 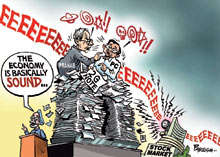 MARKETS
At the centre of a global financial storm, the Greek government made it clear that its actual budget deficit would be closer to 8.5 per cent of gross domestic product, or GDP. It needs to cut the defi cit to 7.6 per cent of GDP this year. A Greek debt default, damaging the balance sheets of European banks and the prospects of the euro single currency, is worrying politicians and the public alike.

The Reserve Bank of India has cleared Reliance Power's proposal to raise $2.2 billion in external commercial borrowing. This will help the company replace three-fourths of the debt for its Sasan ultramega power project with cheaper Chinese and American loans.

Sebi has extended the deadline for promoters to convert their physical holdings into demat form to December 31.

Montek Singh Ahluwalia
Coming Up
What defines poverty? After much debate and heartburn on the Planning Commission's affidavit in the Supreme Court that the spending threshold per capita for the poverty line in cities was Rs 32 per day and in villages Rs 26, the government decided to wait for the findings of the socio-economic caste census, which is expected by January next year, to determine entitlements poor households should receive under welfare schemes. Civil society organisations will be consulted, said Planning Commission Deputy Chairman Montek Singh Ahluwalia.