Does Google offer advertisers a better return on investment than Facebook?

Comparisons are being drawn between Facebook and Google, although one is a search engine and the other a social network. As things stand, Google is far ahead in the race for advertising revenues. In 2011, its total advertising revenues stood at $36.5 billion, over ten times more than Facebook's $3.1 billion.

Dearton Thomas Hector
The third week of May proved to be a rough one for Facebook co-founder Mark Zuckerberg. On May 18, the company's much-awaited initial public offering made a tepid debut on the Nasdaq stock market, and tumbled swiftly thereafter. The same day, the company was also hit by a $15 billion class action user tracking lawsuit. And earlier in the week, General Motors (GM), the largest auto company in the US, announced it was pulling out all its paid Facebook advertisements, citing doubts on the return on investment (ROI).

The company's other problems aside, GM'S decision to pull the plug on its Facebook advertising has raised a few eyebrows. Inevitably, comparisons are being drawn between Facebook and Google, although one is a search engine and the other, a social network. As things stand, Google is far ahead in the race for advertising revenues. In 2011, its total advertising revenues stood at $36.5 billion, over ten times more than Facebook's $3.1 billion. 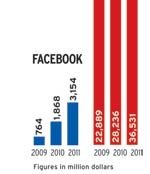 Click here to Enlarge
For an advertiser, the most important factor is the conversion rate. "Google offers more opportunity for conversions. It reaches out to more people," says Mona Jain, CEO of media buying agency VivaKi Exchange India.

"In the last year, we have doubled our SMB (small and medium business) advertiser base," says Praveen Sharma, Head of Media Sales at Google India. For SMBs, the digital medium is cost effective.

With advertisers increasingly striving for the maximum possible reach for their products and brands, digital or online advertising becomes a necessity. "The problem with the digital medium is that the impact of the money spent is not measurable," says Jean Paul Lafaye, CEO and Founder of Equancy, a Parisheadquartered marketing and communication firm that handles brands such as Accor, Nissan Europe and Nestle, among others.

It may be easier for advertisers such as e-commerce sites to measure ROI since every step from a click to a sale can be monitored. "Online advertising comes naturally to us. One thing I wouldn't do ever is not advertise online," says Trivikram Thakore, who heads Marketing at Fashion and You, an online shopping club.

Media buyers say both Google and Facebook are essential for a brand, but one should know how to use both effectively. "Facebook is all about building a connect with customers. It's all about brand building," says Basabdatta Chowdhuri, CEO of Platinum Media, a media agency.

Fashion and You's Thakore puts it best: "In terms of reach there is no match for Google and in terms of interactivity, no one can match Facebook."