Institutions in the public and private sector, globally, have adopted technology to improve operations and management. A recent World Bank study has documented the benefits of centralised e-payments in government systems.

In the run up to Budget 2016, Minister of State for Finance Jayant Sinha had raised a very pertinent issue. He tweeted: "Important to understand constraints of the government. Should we tax more, spend less or borrow more? Careful balance needed."

Sinha's concern stems from the fact that India's fiscal deficit is financed mostly through domestic sources, and nearly 85 per cent of it comes from market borrowing. Last year, the government had paid interest of nearly Rs 3,00,000 crore. In essence, if the government could cut down on its borrowings, it could reduce interest payments and, thereby, reduce the overall deficit.

For instance, when Finance Minister Arun Jaitley pledged Rs 3,45,000 crore this year to fund important schemes, it was also about borrowing up to 3 per cent of India's GDP. And, borrowing at this scale distorts markets, raises the cost of capital, crowds out private borrowers and is also grossly inefficient. If the government were to adopt IT-enabled, just-in-time financing, borrowing could be smoothened out and it could reduce the burden on the exchequer and markets, not to mention improve programme delivery.

Part of the reason why government borrowing is lumpy is the slow embrace of technology within its functioning. A few departments notwithstanding, India's public finance management and administrative systems still run on manual systems of files and cheques. So, even if payments or Direct Benefit Transfers (DBT) are increasingly being made electronically, the provisioning of these funds through the system is still done the old way.

In fact, when Jaitley presented the expenditure statement of the previous financial year, he was talking about the amount of money the government had released from the consolidated fund, and not what was actually spent. At present, there is no way of finding out the exact amount spent, until several months later when the accounts are consolidated. Therefore, the government borrows money and sets it aside for potential use, without really knowing how or when it will be used.

This is so because government fund release follows a top-down, supply-driven formula. Funds are pushed down from the top, one level to the next, according to pre-determined Budget allocations - the Centre allocates funds for each scheme to the concerned ministries, which allocates funds to state governments and, they in turn, pass it on to districts, and so on, until the funds reach the implementing agency. According to existing rules, funds at each level are released in two instalments. The last-mile agency is the one that eventually transfers funds to the beneficiaries or vendors. It is only when 60 per cent of the first tranche is used up that an agency requests for the final instalment. 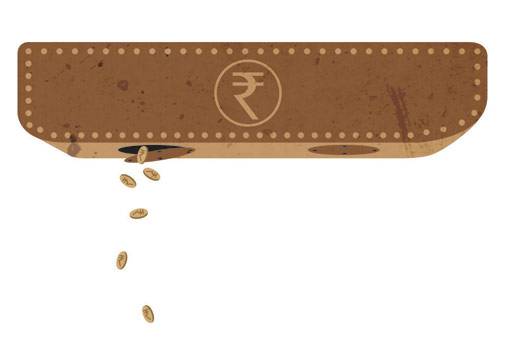 As a result, unused funds often sit idle at various levels in the system. Maintaining such large amounts of unutilised public money poses a clear strain on government finances. It also leads to uneven allocation of funds, and money is always not available when it is needed. This results in delays in payment, or even failure to provide the necessary services. The knock-on effects of this are immense, as many capable private sector agencies shy away from partnering government initiatives because of delayed and uncertain payments.

Delays in payments and layers of intermediaries also increase the opportunity for corruption and rent seeking. In Bihar, affiliates of the Abdul Lateef Jameel Poverty Action Lab (JPAL) implemented a pilot in 2012 for the Mahatma Gandhi National Rural Employment Guarantee Scheme (MGNREGS), where it allowed panchayat bodies to bypass the district and pull wage payments directly from a state pool account. The study estimates a reduction in leakage of 25 per cent, tracing it to the removal of a layer of financial intermediaries and, thereby, reducing the opportunity for taking bribes. In a separate JPAL-affiliated study in Andhra Pradesh, direct cash transfers to MGNREGS workers using biometric authentication led to a 20 per cent fall in leakages.

Perhaps the most pernicious effect of this pen-and-paper allocation process is the lack of real-time monitoring, or even detailed data on expenditure. This means that future allocations and programme implementations suffer, and there is no real guide as to what worked and what did not.

There are, however, ready answers to this problem. Institutions in the public and private sector, globally, have adopted technology to improve operations and management. A recent World Bank study has documented the benefits of centralised e-payments in government systems. In Brazil, conditional cash transfers for the centralised Bolsa Familia programme are electronically sent to a beneficiary's account. Brazil's transition to an electronic payment system is estimated to have cut down administrative costs by over 80 per cent. Similarly, Mexico's move to centralised e-payments for pensions and federal salaries has resulted in savings, transparency and budget control, apart from improved financial planning.

In India, MGNREGS itself has created a fund release model that eliminates all intermediaries and allows last-mile implementation agencies to pull funds directly from state accounts.

What is needed is to extend the electronic payments mechanism to fund disbursal through the government system. This requires programme-specific, workflow-driven IT platforms that enable implementation agencies to pull funds directly to beneficiary and vendor accounts based on real-time expenditure and progress. Within such a system, a scheme that is authorised to draw on an amount can instruct vendors and beneficiaries to upload vouchers on the system, triggering releases into their bank accounts, up to the amount authorised, without the need for multiple intermediate layers.

This will allow government departments to focus their attention on programme implementation and monitoring, rather than fund management. It will also allow the government to introduce its much-vaunted JAM (Jan Dhan Yojana; Aadhaar number; mobile number) trinity into government expenditure.

India has the IT wherewithal to make this happen. The benefits too are enormous. Whether the government is up to the challenge, though, remains to be seen.