For deep underwater salvage, scuba diving equipment and training in diving skills is essential. Equipment like side scan sonar, state-of-the-art detecting devices, underwater cameras and even underwater robots may be used. 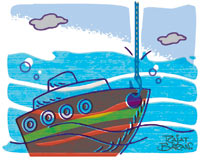 Recently, a World War II shipwreck with an Indian connection has surfaced. British cargo ship SS Gairsoppa was travelling to India when it was torpedoed by a German U-boat in 1941. It sank to the bottom of the North Atlantic Ocean with seven million ounces of precious silver. Here's how such valuables are salvaged.

What is needed: For deep underwater salvage, scuba diving equipment and training in diving skills is essential. Equipment like side scan sonar, state-of-the-art detecting devices, underwater cameras and even underwater robots may be used.

Retrieval Process: Usually, tunnels are dug under the hull of the wreck. The wreck is then lifted using steel cables connected to lifting floatation devices called pontoons. Usually, over 1,300 divers are employed to salvage ships weighing 1,200 tonnes.

Time taken: Large ships can take months, if not years, to be lifted off the ocean bed. In the past year-and-a-half, Bangalore has missed its date with Metro five times. Work on the 33-km, Rs 5,400-crore phase 1 of the project was scheduled to begin in 2005. But, because of delays due to a change of government in the state in February 2006, as well as debate over the suitability of Metro for the city, the Union government had to approve the project afresh in April 2006. Work could begin only in 2007. Meanwhile, the Bangalore Metro Rail Corporation announced the extension of Phase 1 to 42 km and the number of stations to 40 from 32. The approval for it came only in 2008.

The first phase was originally scheduled to open in March 2010. The latest deadline is before Diwali, but since work on the stations has still to be completed, Bangalore looks like missing its sixth date with Metro as well.

QUIRKY
Invest in the dead
Forget gold, real estate and stock markets. A Bangalorebased trust is offering an investment scheme that promises to make you a crorepati in 25 years by investing Rs 50,000 in a 10x10 feet burial site. The trust along with the Karnataka Soaps and Detergents will plant five samplings, including one of sandalwood, at the site. According to it, the sandalwood tree will fetch Rs 1 crore after 20 years, which will go to the investor. The trust also promises to refund the initial sum through bonds on maturity.

SNOOT CORNER
Rare vintage
Vintage cars are collectors' items. But they cannot be just any old cars; they need to have been manufactured between 1919 and 1940, and in good condition. The 1931 Type 41 Bugatti Royale is one of only six pre-war vintage car brands and also one of the most expensive. This $42,000-car was auctioned by Christie's for $8.7 million in 1987. With over 600 cars, the National Motor Museum in France has one of the largest vintage automobile collections in the world.