Impact of the monsoon on agriculture will depend on its distribution

The impact of the monsoon on agriculture will depend on its distribution across the country over the next couple of months.

Ajay Modi
The timely onset of the monsoon bodes well for the economy. Indeed, the monsoon was making rapid progress and was ahead of its schedule over the west coast at the time of going to press. The rainfall (until June 12, 2013) has been 17 per cent higher than normal and augurs well for the sowing of the kharif crop, according to Laxman Singh Rathore, Director General of the India Meteorological Department. "The arrival in the territories covered so far has been either ahead of the normal date or around the normal date. The timely onset is a positive development. Even in those areas where the monsoon has not set in, pre-monsoon showers are taking place," he says.

The south-west monsoon spread over June to September is the primary rainy season in India. Most of the country - except southern peninsula, Jammu & Kashmir and Assam - receives more than 75 per cent of its annual rainfall during this period. The monsoon rainfall has a direct bearing on crops across the country. Agriculture and allied sectors such as forestry and fishing account for 14 per cent of gross domestic product (GDP) but employ more than half of the Indian workforce. 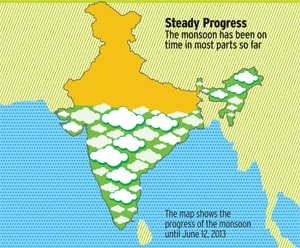 However, analysts caution that it's too early to gauge the impact of the monsoon on agriculture and the economy. A lot will depend on its progress and, more importantly, uniform distribution across the country in the next two months. "There are early good signs but one will have to take it with some degree of caution. It is critical to see how the monsoon progresses and spreads across various parts of the country," says Madan Sabnavis, Chief Economist at CARE Ratings.

The monsoon will be a vital determinant of food inflation as it is critical for sowing of major crops such as paddy, oilseeds, pulses, onions and cotton. "The period from now to middle of August will be critical for sowing and by July end we will have a fair idea of the patterns. Only then we will be able to assess its impact on food availability and inflation," says Sabnavis.

The impact of poor monsoon is felt on several industries, including consumer goods, automobiles, cement and steel. According to estimates, poor rains can impact the country's GDP by anywhere between two per cent and five per cent. This is largely because, despite agriculture's declining contribution to GDP, it has a big impact on the purchasing power of a large section of the population that lives on agriculture