China's trade with South Asian nations has grown from $40 billion in 2006 to $85 billion in 2011. In terms of foreign direct investment in the region, China is way ahead of India.

Gulzar Firoz could very well be a businessman from any country. The Pakistani leather exporter from Karachi speaks of the 'large' Indian market waiting to be tapped into and is keen to find business partners in India. Firoz was in New Delhi as part of a business delegation from Pakistan, the second-largest economy in South Asia. His visit was timed with the India International Trade Fair being held in the heart of the Indian capital, an annual fixture for over three decades.

This time, however, Firoz says, participation from Pakistan is a bit tepid. There are about 85 participants this year from the neighbouring country, down from 150 last year. "Some participants couldn't get the visa on time. We are also closely watching India's elections," says Firoz. "A lot of our trade relations will depend on the new government in India and our government's stance on giving India a 'Most Preferred Nation' (MFN) status." Firoz, in a way, highlights the uncertain trade relations India has not only with Pakistan, but also with other South Asian neighbours. Almost all South Asian nations have a troubled past with India. "Countries like Nepal in the past have been afraid of Indian democracy. They (South Asian nations) have their own policies, approaches, vulnerabilities. Neighbouring countries will bring in external powers to balance India," says Kanwal Sibal, former foreign secretary of India.

India's global trade was worth an estimated $800 billion in 2012/13, of which only about $17 billion was with the South Asian Association for Regional Cooperation (SAARC) partners. SAARC includes Bangladesh, Bhutan, India, the Maldives, Nepal, Pakistan, Sri Lanka and Afghanistan.

"The numbers don't give out the right picture," says Arvind Mehta, Additional Joint Secretary, Department of Commerce, who looks at the South Asian region. He vehemently refutes the theory that the South Asian Free Trade Agreement (SAFTA) between SAARC countries could not take off and India does only limited trade with its South Asian partners. "You have to look at the size of these economies," he says.

SAFTA, signed in 2004 and implemented in 2006, sought to create a free trade zone for close to two billion people residing in the most populous region of the world. It lays down a framework for eliminating customs duties on all traded goods by 2016. But contrary to Mehta's insistence, SAFTA, say most observers, has not taken off the way it had been envisaged. 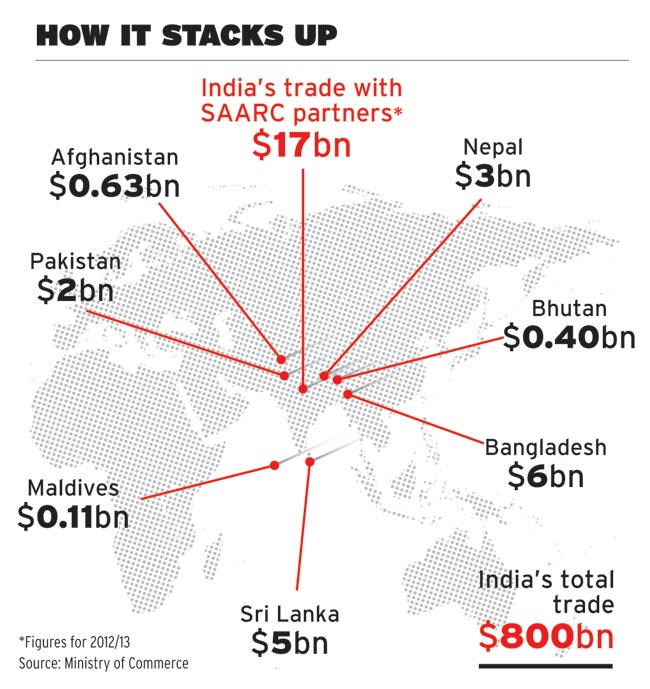 Most countries still have only a limited number of items in the trade basket. For instance, India and Pakistan have 1,209 items on the "negative list" - bilateral trade is prohibited in these goods and commodities.

"India would have to give much more access. If India can show short-term generosity, it will have long-term benefits. Politics keeps trumping economics in the region," says Rajiv Kumar, Senior Fellow, Centre for Policy Research. On its part, India has allowed tariff-free import quotas from Bangladesh. A separate FTA with Pakistan is being considered.

India is exploring the possibility of allowing import of more items at a lower duty rate from Pakistan and liberalising the visa regime, but frosty bilateral relations have hit business ties as well. It has already given the MFN status to Pakistan. If Pakistan also gives India the same status, it will give a big push to the export of textiles, cotton, vegetables, coffee, tea and spices from India. But India has failed to inspire trust among its partners in South Asia and is still seen as a competitor, point out experts. There is potential to quadruple trade in the region, according to Kumar. 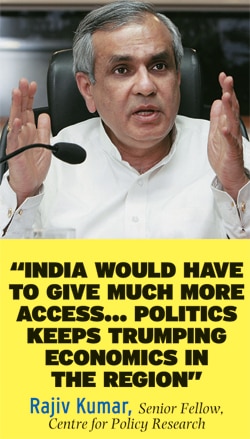 On the policy front, there have been sustained efforts, especially to expand trade ties with Pakistan. Bilateral trade between the two nations stands at around $2 billion. There were at least nine meetings last year between the two countries to facilitate trade, but implementation on the ground has been painfully slow and businesses have paid the price. Consider the example of Indian tyre maker Apollo Tyres. The company had a giant share of the Pakistan tyre market, but tyres got excluded from the revised list of products that could be imported from India.

Pakistani businessmen, too, have made little headway in India. Asher Hassan, 33, a first-generation Pakistani entrepreneur, runs a medical service marketing company, Naya Jeevan. Hassan has been planning to invest in India and has been in talks with a Bangalore-based company for the past three years, but "lack of trust on both sides", he says, has stalled his plans. Or consider the example of Abid Bhatt, who runs a supply chain management company with 350 trucks plying through Lahore, Karachi and Islamabad. "Despite having an integrated checkpoint on the Wagah-Attari border, we are not able to cross over with our trucks. It's a wastage of time and energy to shift from one truck to another," he says.

Poor infrastructure, especially roads, and complex procedures are also major obstacles in improving trade relations with South Asian countries. Some engineering exporters say that infrastructure in Bangladesh is better than India - there are custom landing stations in India with no roads. Traders prefer to take the illegal route to escape the procedural bottlenecks that add to costs in India. Nearly three-fourths of India's total trade with Bangladesh is carried out illegally, according to a World Bank report.

Bureaucratic bottlenecks and crumbling infrastructure in India have prodded the South Asian neighbours to look beyond India. SAFTA had outlined the need for South Asian countries to consider each other as partners. Similar goals in the ASEAN (Association of Southeast Asian Nations) block have been achieved through building production networks where each country in the region specialises in a particular stage of a good's vertically integrated production sequence. "There haven't been efforts to develop value chains within South Asia. It really doesn't make sense to compete with each other," says Biswajit Dhar, Director General, Research and Information System for Developing Countries, an autonomous institute under the Ministry of External Affairs.

China has been quick to recognise the importance of the region and has moved swiftly. The Chinese have said they will not interfere in the internal politics of any country and that they are only interested in doing business. The country also ranks much higher on ease of doing business as compared with India. China was ranked 99, while India was at 134 in an October 2013 World Bank Group report.

Chinese economic engagement with South Asia has grown quickly. Trade has grown from $40 billion in 2006 to $85 billion in 2011. In terms of foreign direct investment (FDI) in the region, China is way ahead of India. In Bangladesh alone, China has invested over $130 million in the first half of this year, while India has invested about $20 million. Sri Lanka attracted $430 million FDI in the first half of 2013, and most of it came from China. "If you look at Chinese share in Sri Lankan trade, almost all components of trade with China should have been happening with India," says N.R. Bhanumurthy, professor at National Institute of Public Finance and Policy.

The onus is on India to build trust and improve trade relations with South Asian countries, say experts. "Small countries have long memories of pressures from bigger neighbours. It is a very difficult exercise. You try to keep them on your side and make sure they feel that you are not suffocating them," says Sibal.

India has a competitive advantage in services, agricultural and engineering exports. "India needs to think strategically and go out of its way," says Kumar, who is working on a project that will enable facilitation of trade between India and its neighbours. But it will have to contend with stiff competition from China.