To address the perception that insider trading invariably goes unpunished in India, a few high profile cases should be concluded in as short a time as possible, says  M. Damodaran, a former chairman of the Securities and Exchange Board of India. 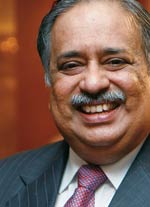 M Damodaran
The recent conviction and sentencing of Rajat Gupta in the United States has led to a renewed focus on the problem of insider trading in securities markets.

Unlike in other cases, the reportage on the case has tended to devote considerable attention to the admittedly outstanding work Gupta has done in empowering the disadvantaged by interventions in the areas of education and health. All this should not divert our attention from the seriousness of insider trading, which is a continuing challenge for regulators of the securities market.

While lavishing praise on a jurisdiction that quickly and effectively addressed the issue in this case, we must not lose sight of the fact that it was not the US's regulatory body, Securities and Exchange Commission , but the prosecutors in New York that accomplished the task.

Asymmetry of information is a major issue that strikes at the root of fairness of the securities market. A safe and sound market is one in which all information that is relevant to existing and potential investors is in the public domain through disclosures that are correct, complete and contemporaneous.

Every insider, whether she or he is a director, a promoter or an employee, is privy to some information before the rest of the world is. If that information is passed onto someone who trades on that basis, the offence of insider trading is complete, whether or not the person who passed on the information or the one who acted on it made money in the process.

A safe and sound market is one in which all information that is relevant to investors is in the public domain through disclosures that are correct, complete and contemporaneous.

In that view of the matter, the jury held Gupta guilty on some of the charges brought against him. The claim, on which evidence was not allowed to be led, that Raj Rajaratnam, the recipient of information had other sources, is neither here nor there.

What lessons, if any, are there for India in dealing with insider trading, which is allegedly rampant here? The first is to successfully conclude a few high profile cases in as short a time as possible. This alone will help address the perception that insider trading invariably goes unpunished in India.

Matters might have been significantly different if the Bombay High Court had quickly decided a case involving senior officials of two MNCs who were found guilty by the then SEBI Chairman in 1998 and had the orders reversed by an appellate body shortly thereafter. If it is decided in SEBI's favour, even after the passage of so many years, it will give a fillip to SEBI's efforts at curbing insider trading.

While SEBI has had a few successes, it is, as is often the case, the failures that have attracted attention and led to adverse conclusions and comments.

Surveillance, investigation and enforcement are keys to effective regulation. SEBI has had, for some years now, a surveillance system that has thrown up a large number of alerts in real time. Acting on one of these, some years ago, SEBI officials had cracked the Nissan Copper case in less than two days.

However, SEBI's manpower is inadequate, considering the large number of regulated entities, the very large number of transactions in the market, the increasing complexity of instruments and the innovative malpractices that seemed to abound. Enforcement is an even bigger weakness than investigation.

Unless enforcement action is timely, effective and exemplary, at least in cases that have systemic implications, there will be no element of deterrence.

Unless enforcement action is timely, effective and exemplary, at least in cases that have systemic implications, there will be no element of deterrence. To achieve this, it is necessary to ensure that this system is not clogged with too many cases, a large number of which might be technical violations.

If this category can be dealt with by a system of consent orders, after putting in place the necessary safeguards based on experience, it would leave the investigation machinery and the enforcement officials in SEBI with the time and the bandwidth to effectively deal with the more important cases.

It is also necessary to ensure that securities market jurisprudence recognises that preponderance of probability is adequate to establish a case. Many cases in which there is a high degree of probability that there has been wrongdoing, might fall short of meeting the higher standard of the charge being proved beyond doubt.

Finally, speed is of the essence. Harshad Mehta and Nick Leeson committed their transgressions, though not of insider trading, around the same time. Leeson was tried, punished, served his term, wrote a book and lives happily or unhappily thereafter. In Mehta's case, there was only one conviction and that too in a cheque bouncing case before he passed away. And this in a country which holds the record of trying and punishing the accused in a rape case in seven days time.