The mutual fund industry has witnessed several reforms in the last two decades. These have helped it expand. But lately, reforms have focused more on investor protection than on taking a balanced view of the institution.

Ashvin Parekh
The Indian mutual fund industry has grown significantly since the launch of economic reforms in the early 1990s. It took off in 2003/04, coinciding with the strong growth of the economy and capital markets. Total assets under management (AUM) have grown at a compound annual rate of 20 per cent. But growth peaked in 2009/10, and the AUM has since declined.

The increase in the size of the Indian mutual fund industry as a percentage of nominal GDP has been substantial. However, a global comparison using AUM figures from the Investment Company Institute (and from the Securities and Exchange Board of India for domestic data) and World Bank figures for nominal GDP shows that India has plenty of scope for growth. India's mutual fund industry is eight per cent of GDP. Australia's is 105 per cent, the US's is 77 per cent, and France's 50 per cent. Brazil's is approximately 40 per cent of GDP and the sixth largest in the world. China and Russia lag behind India. 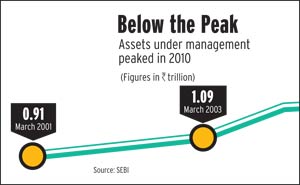 Click here to Enlarge
AUM distribution in India shows a heavy skew (approximately 68 per cent) in favour of income- and debt-oriented schemes, which are short-term investments. Growth and equity schemes account for 28 per cent of total AUM, and balanced and exchangetraded funds, two per cent each.

SPECIAL: India's Best Mutual Funds
Distribution is skewed and shrinking. In March 2012, there were 84,793 mutual fund distributors certified by the Association of Mutual Funds in India. Of these, 78,282 were individuals and 6,511 were corporate distributors. The number was 114,000 on June 30, 2010. About 77 per cent of distributors are in just 10 cities. There is a need to rationalise the incentive structure so that distribution can spread to smaller centres.

Since 2009/10, the industry has faced big challenges because of the global and domestic economic scenario and regulatory changes. Net redemptions (outflows) were Rs 49,405 crore in 2010/11 and Rs 22,023 crore in 2011/12. Assets under management have been concentrated in short-term liquid or money market and assured returns schemes, which, because of tax arbitrages, are used to temporarily park corporate funds. The distribution structure is also under stress due to the abolition of entry load. Transparency mandated by the regulator have been a major growth driver in the past decade. This would have helped growth, but regulatory overemphasis on protecting the retail investor has left product manufacturers struggling and the distribution system with no incentive to sell.

Low financial literacy has made it difficult to attract customers. A recent study - Visa's 2012 Financial Literacy Barometer, which assessed 28 markets - ranked India 23rd. Brazil fared the best, followed by Mexico, Australia, the US and Canada. The survey found that Indian families hold money management discussions infrequently, and that even educated people lack knowledge of investment products and investment plans.

Despite tax benefits, equity-linked savings schemes have not generated sizable AUM. In March 2012, the AUM was approximately Rs 22,326 crore - about four per cent of total AUM. So product manufacturers focus on products for corporate investors rather than retail ones. SPECIAL | How takeovers affect your fund investment
Tax rates do not encourage retail investors. For mutual funds, dividend distribution tax on equity schemes is zero. It is 12.5 per cent on other schemes, and 25 per cent on money market and liquid schemes. Longterm capital gains tax is 10 per cent with indexation and 20 per cent without indexation for non-equity oriented schemes. Shortterm capital gains tax is 15 per cent for equity schemes and 30 per cent for non-equity oriented ones. Taxation should be simplified to give retail investors incentive to put their money in mutual funds.

The mutual fund industry has witnessed several reforms in the last two decades. These have helped it expand. But lately, reforms have focused more on investor protection than on taking a balanced view of the institution, issuer, intermediary, investor and instruments. Reforms that focus on structural deficiencies, distribution incentives and a tax structure that encourages retail investment will help the industry grow in the long term.