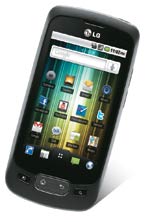 This was the first mobile device running Android 2.2 available in the market and, on the face of it, does not disappoint. Priced attractively, it performs most tasks relatively easily though it may not have the richest feature set. However, there are some niggling issues, not least of which is that when running Android on a relatively slower processor - the Optimus One has a 600 megahertz processor - tasks can begin to hang. The device frequently logged out of Facebook and Twitter, losing its data connection, and on large canvas stages in the Angry Birds game, the device slowed down to a crawl and needed a reboot. As with the Motorola Charm below, it makes sense to download a task closing application for the Optimus One.

-ve: Slow processor, intensive applications slow down the device to a standstill Nifty device
This is the first Android device with a BlackBerry-esque keyboard below the screen. The hybrid touch screen and keyboard seem to work very well and you do find yourself typing more than you would on a touch screen-only device. While the Charm runs the earlier 2.1 version of Android, Motorola's engineers seem to have done a better job of processor management. Applications tend to work better on the whole. The Charm's shape and format will not be to everyone's liking, but it is a very solid device. Motorola seems to have rediscovered its ability to make good mobile devices.

-ve: Backtrack pad not that useful, camera quality could be better, battery life quite ordinary The best on offer
Microsoft has been developing a version of Office for Mac for several generations now. The latest iteration is possibly one of the nicest pieces of Microsoft software. It has all the nice parts of Office 2010 but with all the tricks of the Apple user interface built in. It allows Mac and Windows users to function in the same corporate environment thanks to Microsoft SharePoint. For standalone Apple users, though, Apple's iWork suite is possibly the better bet. There is a bit too much clutter in MS Office 2011 for hardcore Mac loyalists.

+ve: Integrates well with the Windows version of Office

-ve: Occasional users are better off with Apple's own, cheaper iWork suite