The reforms bill would force Indian IT companies to change their business models almost overnight, jack up expenses and hand over key competitive advantages to their American rivals such as IBM and Accenture.

Goutam Das
Some Indian IT executives would rather not talk about it, claiming the 844-page document requires careful reading first. Others speak of it in hushed, apprehensive tones, saying they will need to "engage" - a euphemism for lobby - with the US government to get portions of it amended. Which is putting it mildly - at first glance, the document looks like a well-engineered plot to kill Indian IT.

The Border Security, Economic Opportunity, and Immigration Modernization Act, introduced by eight US senators - now popularly called the 'Gang of Eight' - on April 17, could seriously disrupt the operations of Indian IT services companies in the US if it were to go through. It would force these companies to change their business models almost overnight, jack up expenses and hand over key competitive advantages to their American rivals such as IBM and Accenture.

The US is the primary revenue earner for Indian IT. For more than two decades, Indian IT companies have been contracted by every sector in the US from large banks to retailers to develop and maintain their IT applications from offshore locations at a fraction of the cost it would take to do the same job in the US. 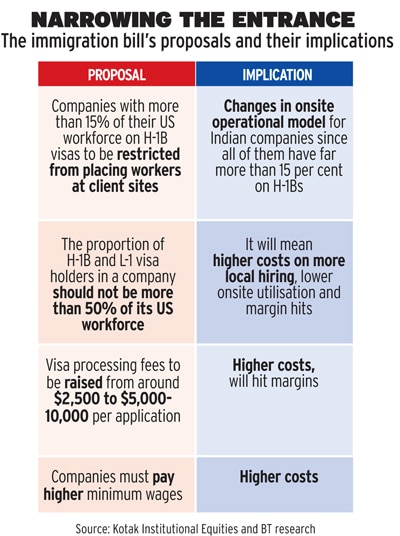 The clauses in the new bill can now change this model dramatically. Here's a sampling. The bill harps on the touchy issue of H-1B visas - a nonimmigrant visa that is extensively employed by Indian IT companies to send engineers on shortterm work to the US. Its use has increasingly come under scrutiny in recent years, particularly following the economic recession from 2008. Some senators have alleged the H-1B visa has been abused to replace Americans in jobs. The new bill decrees that 'H-1B dependent' employers cannot deploy engineers possessing H-1B visas at client locations. And who is an H-1B dependant employer?

Any company with more than 15 per cent of its employees on H-1B visas. All Indian companies are H-1B dependent, some employing up to 95 per cent of their US workforce on such visas.

"If this is the case, it would challenge the fundamentals of the current onsite operational model of Indian IT companies. These companies do not have large centres of their own and typically deploy their resources at client sites as contractors," Kawaljeet Saluja, analyst with Kotak Institutional Equities, wrote in a report. "You will have an uneven playing field because IBM and Accenture will still be able to get a guy on H-1B from India and place him in the US for the same job," says Krishnakumar Natarajan, CEO of mid-tier IT services company Mindtree and the Chairman of industry lobby NASSCOM.

Another proposal seeks to hike visa fees. A third wants to limit the proportion of H-1B and L-1 visas (another kind of non-immigrant visa) granted to 50 per cent of a company's US-stationed employees. Considering that most Indian companies employ more than 80 per cent of their US workforce on such visas, they will need to immediately start hiring locals to achieve the mandated 50:50 ratio. This would spike their wage bills as local resources are more expensive.

The Indian IT industry distinctly feels it has been "singled out" in a bill that also addresses much larger issues around illegal immigration, border security and family reunification. Outsourcing has been under attack for many years now, but this time, the chances of the bill going through are high since it is a bipartisan bill brought with immaculate timing. The US economy has been slow to recover and unemployment is still high at well over seven per cent.

But there is a catch. Unemployment in the computer and mathematics-related occupations is very low at three per cent and all American companies are struggling to find local engineers. The bill, if passed, could also have unpleasant side effects for the US too. Many experts argue that it will end up stalling the American economy because of the dearth of local talent.

"The problem is there are not enough replacements, the US economy will shut down," said Gordon Coburn, President of Cognizant, during the company's analyst call post its quarterly earnings release on May 8. So how should Indian IT respond? NASSCOM has intensified lobbying efforts, hoping to get some of the clauses either dropped or negotiated. "Our first point to lawmakers is that there will unintended consequences of the bill impacting the United States adversely. They haven't realised this," says Som Mittal, President of Nasscom.

Perhaps there is a silver lining in all of this. It gives Indian IT firms a chance to become truly 'multi-national'. "Diversity is important for globalising a company. Indian IT companies claim they have people of 15 nationalities employed, but if you look at the real percentage of foreign hires, it could be less than one per cent. The bill will force companies to look for talent locally and help Indian companies globalise," says Pradeep Udhas, Partner and Head of IT-ITES at advisory company KPMG.