NSEL crisis: Promoter Jignesh Shah shifts the blame on to its management

Sources say Shah is buying time not only to extricate himself from the NSEL mess, but also to cash in his investments. Some analysts believe FT could sell its controlling 26 per cent stake in the commodity exchange Multi Commodity Exchange (MCX) as well.

It is curious that in the recently concluded monsoon session of Parliament, both the government and the opposition avoided discussing in detail the snowballing National Spot Exchange (NSEL) crisis. Why were the lawmakers silent on this while waxing eloquent on so many other issues? "NSEL is bigger than the Harshad Mehta scam," says Alok Churiwala, Vice Chairman of the BSE Brokers Forum. "Mehta only cheated the banks, while NSEL has breached the trust on a nationwide electronic platform."

Both NSEL and Jignesh Shah, its Vice Chairman, were not available for comment.  The NSEL has defaulted on a payment of Rs 5,500 crore to some 13,000 investors. After trading stopped, it had put forward an eight-month plan to settle investors' dues, but it has already defaulted. At the time of going to press, it had paid investors just about Rs 297.5 crore against a commitment to pay Rs 522 crore. But of this too, the bulk, Rs 177.23 crore, has been sourced as a bridge loan from the NSEL's promoter Financial Technologies (FT).

Meanwhile, the audit of the 20-odd NSEL- accredited warehouses by Swiss-based audit firm SGS has thrown up disconcerting findings. Stocks found so far are only about 15 per cent of the declared amount against which transactions  took place on the NSEL. Sources say the audited warehouses were expected to have stocks worth Rs 2,200 crore, but the recovered stocks are worth only Rs 300 crore. How did the warehouses issues receipts without verifying the value of the commodities or checking for collateral? The size of the shortfall amount  suggests it was more than just
mismanagement. 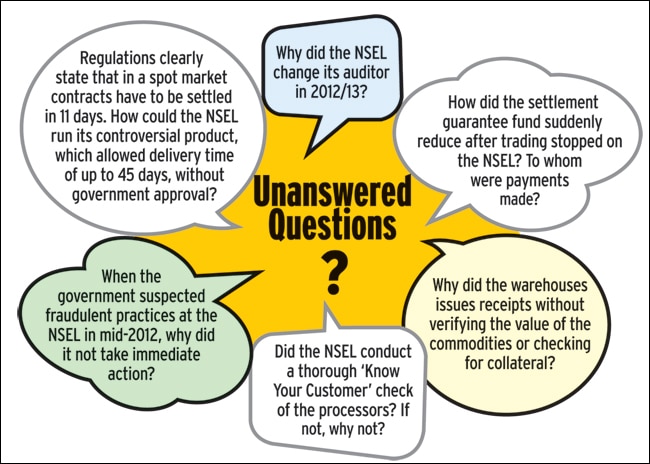 This puts the spotlight on the role of the NSEL's own auditor - why was this not pointed out earlier? "The accounts for 2012/13 were in order. In fact, we verified 75 per cent of the transactions carried out on the NSEL and we did not find any problem," says Mukesh Shah, promoter of Mukesh P. Shah & Co, the NSEL's auditors. There is another unanswered question - the mysterious depletion of the NSEL's settlement guarantee fund (SGF) after trading was stopped. It was earlier stated to be Rs 800 crore, it is now Rs 60 crore. "Liquid investment including fixed deposits receipts and investment in mutual funds were genuine and they were also verified by the banks. In fact, funds close to Rs 800 crore existed in the SGF till July 2013," says Mukesh Shah.

The NSEL last year replaced its previous audit firm SV Ghatalia, a member firm of Ernst & Young Global, with Mukesh P. Shah & Co. There were differences between SV Ghatalia and the NSEL on stock reconciliation and the auditor wasn't willing to sign NSEL's financial statements, according to sources. E&Y officials were not available to comment on the issue.

NSEL had put forward an eight-month plan to settle investors' dues, but it has already defaulted

Separately, the board of the NSEL launched a formal complaint against its former CEO Anjani Sinha and his team with the Economic Offences Wing (EOW) of the Mumbai Police. This is seen as a move by Jignesh Shah to absolve himself of the blame for the crisis. The board has alleged that the earlier management was probably hand in glove with the entities that defaulted on their payment obligations. "The EOW has formed a special investigation team and is collating information from other regulatory agencies, including the Registrar of Companies and the Forward Markets Commission. The Mumbai police wing after its investigation will be filing a first information report," says an exchange official.

The NSEL itself could face criminal proceedings. The Union government is reportedly mulling action against its officials on various charges, including money laundering.

Shah is seen to be buying time not only to extricate himself from the nsel mess, but also to cash in his investments

Meanwhile, Shah has hired top lawyers to defend himself if the government initiates action against him, as is widely expected. If it does, the government can attach his personal assets along with those of FT and its subsidiary. "He is ring fencing himself. The case against Sinha and others could be a strategy," says a NSEL lawyer on condition of anonymity. By trying to make Sinha own responsibility for the fiasco at the NSEL, Shah is trying to safeguard his interests. In the worst case scenario, FT can write-off its investments in the NSEL.

Sources say Shah is buying time not only to extricate himself from the NSEL mess, but also to cash in his investments. Some analysts believe FT could sell its controlling 26 per cent stake in the commodity exchange Multi Commodity Exchange (MCX) as well.

However, many are wondering why the government is delaying action in the matter. "The government has been acting and a high level committee is in place. But while  Parliament is in session the report will not be out. It doesn't want to give the opposition a chance to pounce," says Churiwala.