Philip G. Heasley, President, CEO and Director of ACI Worldwide, a payment systems and financial services company with a market-cap of $1 billion, is eyeing India for growth.

Philip G. Heasley, President, CEO and Director of ACI Worldwide, a payment systems and financial services company with a market-cap of $1 billion, is eyeing India for growth. ACI is the back-end software provider for electronic money transfers. When you swipe your Visa or Mastercard credit card at a store, for instance, it could well be ACI's software that manages the transfer. Heasley spoke to Suman Layak on ACI in India. Edited excerpts: 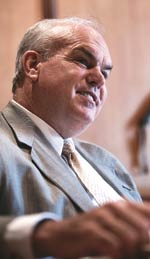 On the Indian opportunity: Consumer payment in India today is 99 per cent in cash. There is a huge conversion waiting to happen. Mobile-based money transfer and the UID project that will create a need for payment authentication are also big opportunities in India. Visa is now building its own switch in Europe and soon some of these players will need to build their own switches in India and China, too. Online payments also save the government from printing cash. Twenty years ago, counterfeiting was a big problem in the US. Now it is cyber crime.

On cyber crime and online payment fraud: Fraud is the largest single cost in doing online transactions. We had commissioned a study on fraud and we found that 25 per cent of credit card holders across the world have been affected by it and the number specific to India is 24 per cent. Now 71 per cent of those affected by fraud the world over were happy with the way their banks responded. But in India, 41 per cent of those affected said they were unhappy with the way the banks dealt with it. This is where our fraud detection software comes into play and we are able to track a fraudulent or suspect transaction even while it is happening.