Pranab Mukherjee has been the worst finance minister since the economy was liberalised in 1991.

Sanjiv Shankaran
A 2007 conversation with an MP from the Communist Party of India (CPI) showed how the messenger is sometimes of more consequence than his message. After a number of weak arguments to explain why the Communists were opposing a proposal by then Finance Minister P. Chidambaram, the MP finally said: "We don't trust anything coming from Chidambaram." This was during the United Progressive Alliance's (UPA) first term, when the Communists were officially supporting the ruling coalition.

When Pranab Mukherjee, a consummate politician, took over as Finance Minister in January 2009 - following Chidambaram's move to the Home Ministry - it was hoped that he would provoke less hostility than his predecessor and thus be more effective. 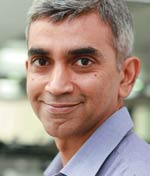 Sanjiv Shankaran
The air of expectancy remained when he was reappointed in May with the UPA beginning its second term: four months had been too short for him to get things moving. But three years later, all hopes have been belied.

As Mukherjee looks to shift further up Raisina Hill, from North Block, which houses the finance ministry, to Rashtrapati Bhavan, the economy is going downhill. It is not just that his tenure was unremarkable, it was very disappointing even given the fact that the entire government has been under-performing.

The most important economic reform India needs today is a transition to the Goods and Services Tax (GST). A situation which called for a skillful politician like Mukherjee to soothe states apprehensive about agreeing to amend parts of the Constitution that guarantee them a monopoly over some kinds of taxes.

But Mukherjee the politician failed GST. Hopes of a quick transition to GST died one evening in January 2010. Sullen finance ministers of states spilled out of the finance ministry after a meeting with Mukherjee, complaining he did not seem to listen to them. Indeed the symbolism of that evening was appropriate.

The finance ministers left through the gate leading to New Delhi's historic Rakab Ganj Gurudwara, believed to have been built on the spot where the martyred ninth guru of the Sikhs, Guru Tegh Bahudur, was cremated. The GST proposal seemed to have been martyred too.

To be fair to Mukherjee, he took office at a difficult time. The fallout of the financial crisis in the developed economies had made economic management challenging. No doubt the Indian economy had revived by then, but that was only due to the stimulus provided by the government to combat the global downturn. However, global crude prices were low, just $58 a barrel that month. This was perhaps the best time to push for some reforms in India's complex statedominated oil economy. (By the time Mukherjee presented his last Budget in March 2012 crude prices had more than doubled.)

Mukherjee, who is celebrated for his phenomenal memory, couldn't have forgotten Y.B. Chavan. Chavan was India's finance minister when Mukherjee first became union minister in February 1973. Presenting the 1974 budget in the shadow of the first global oil crisis, Chavan had the courage to kick off far-reaching reform in India's direct taxes by slashing the peak rate to 77 per cent from a whopping 97.5 per cent. Mukherjee had a good platform to reform the oil pricing mechanism and partially insulate the economy from future oil crises. Yet the politician who could win the support of both the CPI (Marxist) and the Shiv Sena for his presidential bid could not convince his cabinet colleagues of the need for oil pricing reforms.

The economy remains vulnerable for it. More than slowing down economic momentum, the biggest blemish in Mukherjee's performance has been presiding over an unbroken spell of high inflation for more than two years. In a country where most people work in the informal sector, inflation has been most painful- a regressive tax on the vulnerable.

During the early part of Mukherjee's tenure, the economy, propped up by the stimulus, did well. In the July-September quarter of 2009, gross domestic product (GDP) grew by 9.83 per cent, suggesting it was time to re-visit the tax giveaways. The delay in withdrawing fiscal stimulus has directly contributed to expanding the fiscal deficit and worked against the Reserve Bank of India's monetary policy measures to lower inflation by keeping interest rates high.

The slowing economic momentum, the fiscal mess and alarming indicators in balance of payments must have made it tough for finance ministry bureaucrats to think of nice things to say about their boss at public functions Unsurprisingly, they resorted to inanities. Even so, a speech by Chief Economic Advisor Kaushik Basu stood out. Last December, with hope receding fast, Basu praised Mukherjee as one of the few finance ministers in the world who knew the difference between capital-output ratio and incremental capital output ratio. He could hardly have discussed Mukherjee's handling of the economy, which has been so dismal that Israel's finance minister, Yuval Steinitz, who was in the audience listening to Basu, may have wondered if his country would soon replace India as the 'I' in BRICS.

The economy has been plagued by muddleheaded policy. Under Mukherjee, different wings pulled in different directions. In his last budget in March, Mukherjee proposed tax policies, including retrospective amendments, which seemed designed to frighten away foreign investors, including relatively long-term ones such as private equity funds.

The timing was awful as India was on the verge of running up its largest ever current account deficit and needed to be mindful of foreign investment. Almost as if to offset the credibility damage caused by the tax proposals, Mukherjee spent his last few days in office tinkering with the capital account to attract more foreign investors, including potentially volatile ones.

Given the speed at which India is integrating into the world economy, what it needs is a strong institutional framework to deal with the volatility that could accompany increasing integration. There cannot be an assessment of the Mukherjee era without reference to the mess he has left his ministry in. It is difficult to think of a time when morale was lower and competence perceived to be inconsequential. Bureaucrats tend to blame Mukherjee's adviser, Omita Paul, for the mess. Paul's seemingly arbitrary exercise of power, which flowed from Mukherjee, was often blamed. However, an adviser can only be as powerful as the minister wants. The rot starts at the top.

When Samajwadi party chief, Mulayam Singh Yadav, announced he would back Mukherjee's bid for presidency - and thereby virtually guaranteed his chances of victory - he unwittingly did the economy a favour.