The RBI governor is using the headroom the stability of the rupee has given him to first correct the short-term interest rates, which were being raised by the central bank to kill speculation in the forex market and support the rupee.

The concerns and actions of RBI governor Raghuram Rajan have not been all that different from those of his predecessor D. Subbarao. PHOTO: Reuters
Anand Adhikari
On his first day in office on September 4, Raghuram Rajan, the new governor of the Reserve Bank of India, pointedly underlined the likelihood of his surprising the financial markets with his actions. "A central bank should never say 'Never'," said the 50-year-old Rajan. Two weeks later Rajan showed he had meant what he said.

Much like US Federal Reserve Chairman Ben Bernanke, who surprised analysts by persisting with the Quantitative Easing (QE) programme when many were expecting him to start tapering it off, Rajan, too, did exactly the opposite of what the markets and pundits had suggested he would. Announcing his first monetary policy on September 20, Rajan hiked the repo rate from 7.25 per cent to 7.50 per cent when he was widely expected to leave policy rates unchanged, if not lower them.

The move has been panned by industry bodies. "A positive signal by way of a cut in the repo rate would have helped perk up sentiments," said Naina Lal Kidwai, Country Head, HSBC (India) and President of FICCI.

The concerns and actions of RBI governor Raghuram Rajan (right) have not been all that different from those of his predecessor D. Subbarao (left) Photo by Nishikant Gamre and Imaging by Ravi
But Rajan seems to be taking one step at a time. Fortunately, his stint with the RBI has begun on a positive note. There has been a sudden appreciation of the rupee against the dollar partly because of the measures he took immediately on taking over, but also because of the fortuitous easing of tensions in Syria and the US Federal Reserve's decision to defer the QE tapering.

Rajan is using the headroom the stability of the rupee has given him to first correct the short-term interest rates, which were being raised by the central bank to kill speculation in the forex market and support the rupee.

In July, the RBI had made money dearer by capping the borrowing limit through the repo rate window at Rs 75, 000 crore and hiking the Marginal Standing Facility (MSF) rate - another RBI window for lending to commercial banks - by 300 basis points (bps) to 10.25 per cent.

Given the repo rate limit,  banks had no option but to borrow above that repo limit through the MSF where rates were at the high level of 10.25 per cent. This forced banks in turn to hike interest rates. A day before the mid-quarter review, State Bank of India, the country's largest lender, hiked its base rate by 10 bps to 9.80 per cent. So too, the top three private banks have increased their base rates over the last month. ICICI hiked it by 25 bps to 10 per cent, HDFC Bank and Axis Bank by 20 bps to 9.80 per cent.

Though he has raised the repo rate, Rajan has actually given banks some relief by reducing the MSF rate from 10.25 per cent to 9.5 per cent. Banks will first go to the repo rate window to borrow, where the rate is 7.5 per cent. But once the repo window is exhausted, they will approach the MSF window where the rates have been lowered. So, the MSF rate cut is likely to reduce the banks' cost of funds, even as the central bank tries to fight inflation by controlling liquidity in the financial system by hiking interest rates.

"Our immediate emphasis is on reducing the cost of funds to the financial sector," said Rajan in a media interaction after announcing the post policy review. "The policy signals a return to the repo rate as the key tool, as well as the RBI's intention to cautiously unwind the exceptional measures it took and place greater emphasis on long-term growth dynamics," says Chanda Kochhar, CEO & MD of ICICI Bank.

Like his predecessor D. Subbarao, Rajan finds himself in a tight spot. He would have liked to support growth by cutting rates, but high inflation left him few options. Wholesale price index (WPI) suddenly moved up to 6.1 per cent in August, which is well above the RBI's comfort zone of 5.5 per cent. The US decision to continue with the QE programme will also push up global commodity prices, especially that of crude oil. This has the potential to further stoke inflation, and has forced the central bank to keep interest rates high. The consumer price index (CPI) is close to double digits because of high food prices. In addition, the impact of rupee depreciation against the dollar in the recent past will also show up soon. "We are for both growth and price stability," said Rajan.

Thus there is every likelihood of long-term interest rates remaining high for a while despite the RBI cutting MSF rate by 75 bps. Monetary transmission, for example, is too slow to perk up the slowing economy. In the last 18 months when Subbarao finally began reducing the repo rate, lowering it by 125 bps in all, the banks' lending rate fell only marginally by about 50 bps to around 12 per cent.
Rajan's next logical step should be to fully roll back the monetary tightening measures taken to curb speculation in the foreign exchange market. Rajan has promised that the repo rate will return to being the effective policy rate once the borrowing limits are removed. "The difference between the MSF and repo rate will be brought down to 100 basis points," said Rajan. 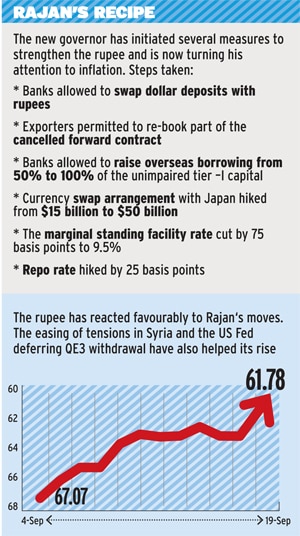 Meanwhile, the new governor's measures to attract dollar inflows are already working. He announced that till September 19 he had received $917 million through the swap facility introduced on foreign currency non-resident dollar funds. This essentially allows banks to convert dollar deposits into rupees. "We can finance this year's current account deficit without drawing down on reserves," says Rajan.

But the biggest worry remains the economic slowdown. Rajan has said growth could pick up in the second half of the year. In the July policy review, the RBI under Subbarao had forecast GDP growth of 5.5 per cent in fiscal year 2014 as against its earlier estimate of 5.7 per cent. The Prime Minister's Economic Advisory Council (PMEAC) has also recently lowered its GDP growth projection to 5.2 per cent.

Clearly, the government must speed up reforms and other policy measures to stimulate growth. "We must, therefore, work on our current account deficit by increasing the long- term foreign inflows through FDI, lowering our import bills and increasing export competitiveness," says Kidwai of HSBC. There are also supply side issues pushing up inflation that need to be sorted out by the government. Rajan has already signalled that the onus is on the government now. It is time to build a bullet-proof national balance sheet and growth agenda, he asserted.