LG Google Nexus 4's best feature is its pure vanilla Android 4.2 OS, devoid of any tweaks. It has an 8MP camera and a new easy-touse interface.

Finally, a Google smartphone has officially become available in India. In many other countries, it was launched last year. Built by LG, the Nexus 4 has an all-black body and a 4.7-inch Corning Gorilla Glass 2 display. At 139 grams, it feels slightly heavy. But the best feature is its pure vanilla Android 4.2 OS, devoid of any tweaks. This version of the OS offers widget support on the lock screen and apps can be uninstalled by simply dragging them upwards. Powered by a Qualcomm Snapdragon 1.5 GHz quad-core processor paired with 2GB RAM, the phone performed impressively all the while it was tested out. It has an 8MP camera and a new easy-touse interface. 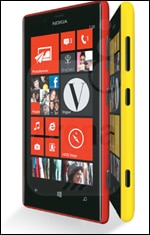 Nokia Lumia 720
Top-notch, yet Affordable
Nokia Lumia 720
The Nokia Lumia 720 is a mid-range Windows Phone 8 smartphone with a unibody design and a smooth and solid build. It has a 4.3-inch display and three touch keys at the front. At 800x480p, the display resolution is low, but Nokia's ClearBlack technology makes it better than other devices of the same resolution.

Along with the regular Windows Phone 8 tile interface, the Lumia 720 also has an improved lock screen that can pull updates from all the apps. Since Windows phones run smoothly on relatively low-power processors, the 1 Ghz dual-core processor with 512 MB RAM is enough to provide good performance. The highlight of the device is its 6.7MP camera with Carl Zeiss lens and a best-in-class F1.9 aperture. It captures details and real-life colours perfectly. The sound output is above average.

+ve: Price, Camera
-ve: Screen resolution
Price: Rs 18,094
Solutions in a Jiffy
Just a calculator? Yawn. Hang on, this app is way ahead of the pack. MyScript Calculator, by Vision Objects, available on both iOS and Android operating systems, solves the most complicated of equations. Yes, it does get a bit confused if your '3' looks a bit like '5' or if you scribble a '/' instead of the symbol for division. But set it a problem like the one shown above and it will give you the solution in a jiffy.