One more android tablet, and a late sizzler

Reliance 3G Tab
Reliance 3G Tab
Slow Mover
The new Reliance 3G Tablet is not bad. But that is hardly an endorsement. The price is right, given the decent 3G data package that Reliance Communications offers as an option, and that it runs a relatively recent Android version 2.2, though not the tablet-optimised version 3.0. But the device, made by Chinese company ZTE, is slow. Try playing Angry Birds, which is not a very demanding application, and the device slows down dramatically: you find the titular birds moving across the screen in a jerky manner. The touch response is nowhere as smooth as that on the iPad; the Reliance 3G Tab is far behind the Apple product. That said, this tablet wins over other similarly-priced tablets, simply because of the attractive data package that Reliance bundles with this product, as well as the network provider's fairly good 3G network.
Price: 12,999 (additional Rs 7,000 for annual data package of 5GB every month)
+ve: Affordable, attractive data package bundled in for a small additional sum
-ve: Performance feels laboured, touch response 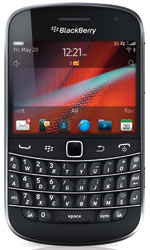 BlackBerry Bold 9900
BlackBerry Bold 9900
Latecomer hits sweet spot
Touch screens on mobile phones have been around for nine years now. Research In Motion, or RIM, seems to have got it right very late. But with the BlackBerry Bold 9900, the Canadian maker of the best device to date for e-mails-onthe-go has hit a sweet spot - at least for users who swear by their BlackBerrys. The device sizzles with a high-speed processor, touch screen, a nifty OS and an HD camera. The 9900 sure offers RIM hope against Apple and Android.
Price: Rs 32,490
+ve: 1.2GHz processor, OS7, high-spec touch screen Affordable, attractive data package bundled in for a small additional sum
-ve: Performance feels laboured, touch response slow High price, an AppWorld very bare, screen not as good as Android models from other phonemakers