Samsung UA46F7500BJ
SAMSUNG UA46F7500BJ
Price: Rs 1,35,000
Great Leap Forward
Last year's Samsung Smart TV models were innovative, but a bit gimmicky. This year, with its new range, Samsung seems to be getting some of the rough edges smoothened. The 46-inch Series7 F7500 took barely 10 minutes to set up, thanks to the tutorial that comes with the set. The Smart Touch Control remote has a touch pad and needs some getting used to. The remote also responds to verbal commands to adjust volume, and so on. This works much better than on previous models. This set has 'motion control' too - it obeys commands conveyed through arm gestures - but such gesturing takes away the joy of leaning back and simply watching. However, the standout feature is the picture quality and the 3D, which seems to have improved enormously from past versions. Much of this improved viewing is due to the new lightweight 3D active glasses that come with the set. There is also SmartHub which lets you add apps, provided you have a reasonably fast (1Mbps or more) broadband connection linked to the screen. You can even change the software and the quad-core processor - using the slot for the evolution kit in the rear - later if you want to. That is cutting edge for you.
+ve: Picture, Great 3D, Several smart features
-ve: Motion control' Price 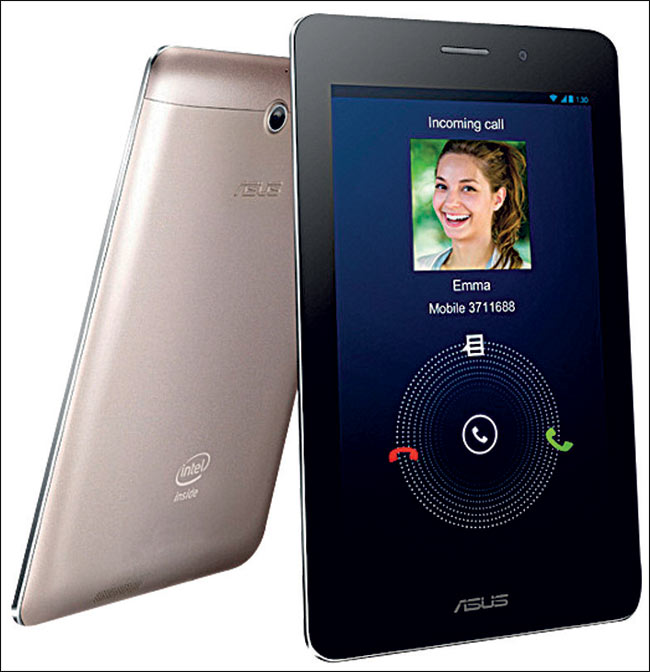 Asus Fonepad
ASUS FONEPAD
Price: Rs 15,999
Top Draw
The latest seven-inch tablet which can also make phone calls, the Asus Fonepad runs the Android Jelly Bean and is powered by Intel's Atom Z2420 1.2GHz processor. It is easy to hold and thin enough to make browsing easy. The 800x1216p display is good, but not stunning. The sound quality is good too. We tried a few resource intensive games and noticed no lag at all. Tabbed browsing also worked fine. It is awkward holding a tablet to one's ear, but the Fonepad does not prove too awkward. The front and rear cameras are just about okay, but the battery is really top draw.
+ve: Performance, Battery
-ve: Screen resolution, Camera