The world's largest school lunch programme may be fraught with shortcomings but it can still be saved if social entrepreneurs play a bigger role in its implementation.

Students having lunch at a Bangalore school
K.R. Balasubramanyam
Ten years ago, Tejaswini Ananthkumar, a former aerospace scientist in Bangalore, was approached by an education department official to provide lunch under the Mid Day Meal Scheme (MDMS) to schoolchildren. Though the thought of feeding thousands of children was daunting, she agreed to supply 10,000 hot meals a day. Today, her non-profit organisation - the Adamya Chetana Trust - feeds about 200,000 children in Karnataka and Rajasthan.

It is a tough job and the Adamya Chetana Trust has a spotless record. However, the recent deaths of 23 children in a Bihar school after eating a poisonous lunch has turned the spotlight on the world's largest school lunch programme. The MDMS, funded by the Centre after a landmark Supreme Court order in 2001, covers 110 million children - roughly five times the population of Australia - in 1.2 million schools. Pioneered in Tamil Nadu in the 1960s by then Chief Minister K. Kamaraj, it is implemented largely by individual schools rather than by non-profit groups. Food cooked by non-profit organisations only reaches about six million children. And herein lies the problem. Government schools are not equipped to organise such massive meals. Cooking is not their core competence and they often do not follow safe cooking practices. T.V. Mohandas Pai, Manipal Global Education Services Chairman and a trustee at the Akshaya Patra Foundation, says most complaints related to quality of food at government schools arise from poor hygiene. "The cooks in government schools don't wear caps or gloves, and are not checked for disease. That leads to food poisoning or bad or stale food," he says.

Experts say there is considerable opportunity for social entrepreneurs and public-private partnerships in the scheme. Bangalore-based Akshaya Patra, Mumbai's ISKCON Food Relief Foundation and Hyderabad's Naandi Foundation prepare their MDMS lunches in state-of-the-art kitchens, each with a capacity to cook between 50,000 to 200,000 meals a day. A modern kitchen costs between Rs 1 crore and Rs 4 crore to build, depending on capacity. While ISKCON feeds 1.2 million children in eight states, Naandi serves about 1.1 million children in four states. Akshaya Patra feeds 1.34 million children across nine states.

110 million children are covered by the lunch programme

Despite the scale, many non-profit organisations run on tight budgets. The Centre supplies rice or wheat and also provides a cash grant for cooking and distribution costs. Many states provide additional funds from their own budgets. For instance, organisations supplying food to primary class children in Andhra Pradesh get Rs 4 per meal, while those doing so in Odisha to upper primary classes get Rs 5.39 per meal. But this does not cover costs. "The government grants meet 60 to 70 percent of our annual expenses. The rest we mobilise from corporates," says Manoj Kumar, CEO, Naandi.

V. Balakrishnan, Board Member at Infosys and a trustee of Akshaya Patra Foundation, does not think the government is equipped to carry out a mid day meal programme of this scale, and argues in favour of private sector participation. The answer to the problem, he says, is to involve large corporates and ensure the quality of food is maintained during distribution. The massive school meal programme, according to Akshaya Patra Vice Chairman Chanchalapathi Dasa, can open up new opportunities by creating a new stream of workers such as food safety trainers, inspectors and auditors. "Today, the whole programme runs on trust with no accountability. There should be a clear command chain with proper accountability," says Balakrishnan. But the lunch programme is fraught with challenges. State governments seem to be assigning more responsibilities to their schools to implement the lunch programme instead of handing out the job to specialist non-governmental organisations. For example, the Gulbarga zilla panchayat administration in Karnataka has ordered non-profit groups to stop supplying food to schools from August 1 and directed schools to set up their own kitchens instead.  There are other unique issues. For instance, Ananthakumar says her organisation is willing to go into new rural areas in the rice belt but not the wheat belt, because making chapatis is both cumbersome and expensive.

Despite the flaws, the school lunch programme has been largely successful. Prajisha, a teacher in Kerala's Kozhikode district, says quality is not an issue in the state because teachers in several schools contribute money and eat the same food.  Elsewhere in the country, leading non-government organisations are stepping up their feeding capacity. For example, Akshaya Patra aims to feed five million children by 2020. 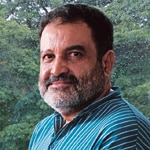 The cooks in government schools don't wear caps or gloves, and are not checked for disease: T.V. Mohandas Pai, Chairman, Manipal Global Education Services
Studies show the MDMS has boosted school attendance, especially of girls, and has in some cases even reduced nutritional deficiencies in children. The government could take a tip or two from some of the world's older and more successful such schemes. Japan's school meal programme is more than 120 years old, while Mexico's dates back to 1929. Brazil covers 47 million children, and the US and China feed 45 million and 26 million respectively.

While governments all over the world run such schemes, nowhere is it as important as it is in India. Because, for millions of children in the country, the school lunch is the only hope for at least one square meal a day.