Though India may be better off than others due to healthy macroeconomic parameters, the sell-off by global funds will keep markets here volatile, writes Senior Associate Editor Mahesh Nayak.

The BSE Sensex has fallen nearly 10 per cent in the last one month following a global panic triggered by economic problems in China that have led to devaluation of the yuan. A weaker yuan will help exports from China, hurting other countries, including India.

Foreign institutional investors, or FIIs, took out over $2.5 billion from India in August, the highest in a month since January 2008. "Global funds are selling across emerging markets," says Vikas Gupta, Executive Vice President, Arthveda Fund Management. "Concerns about China's economy have made global as well as emerging market funds pare their exposure to the country. This has, in turn, impacted all emerging markets, or EMs, including India. The other reason is that EMs as a pack has not given good returns," he says. Barring Hungary and Russia, all countries covered by MSCI Emerging Market Indices are down 6 per cent to 53 per cent year-to-date.

The question everyone is asking is, what next? And, where are Indian markets headed in the short to medium term? "This is just the tip of the iceberg. The current commodity crisis is bigger than the 2008 global financial crisis. Then, the banking system had collapsed. Today, we are talking about countries," says Seshagiri Rao, Joint Managing Director and Group CFO of JSW Steel.

"Concerns about China are not small. The country is seeing a structural change from being export-driven to a consumption-led economy. This will take time. Until then, it will do everything to keep its exports competitive. In such a case, one can't be sure that China will not further devalue its currency," he says.

Though India may be better off than others due to healthy macroeconomic parameters, the sell-off by global funds will keep markets here volatile. One reason for this is the dependence on foreign funds flows. "Going ahead, there will be a rebalancing in the emerging market pack. India will be a beneficiary but it will take time. There is a lot of uncertainty in the world. Till the dust settles, the big players would like to stay on the sidelines," says Gupta of Arthveda. China's weight in the MSCI Emerging Market Index is 25 per cent compared to India's 10 per cent.

Markets are also factoring in a rise in US interest rates. This is expected to encourage foreign funds to shift some money back home the US. "That the US Federal Reserve will increase rates is known. But with the global economy slowing, the quantum of the increases will be smaller. The Fed will move in a gradual manner," says Gupta.

S. Naren, CIO, ICICI Prudential Mutual Fund, says, compared to the time of the global financial crisis, India is today stronger than many other economies. "However, for our markets to rise, there has to be economic growth so that FIIs stay put. Today, growth seems to be slowing." 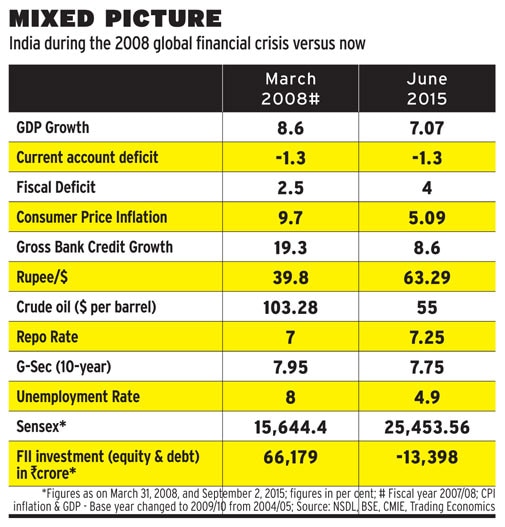 Rao of JSW Steel says that the government must generate jobs and fuel economic activity. "It will have to do some smart spending in a manner that it doesn't spoil the country's balance sheet and also keeps the wheels of economic activity moving, something like they are trying to do in the railways," he says.

"Once economic activity picks up and pressure on corporate balance sheets eases, private sector spending will also pick up, but until then it is for the government to spend," he adds.

Amid this gloom, there is one good news that the markets seem to be missing - crude oil prices have fallen towards $50 per barrel and are not expected to go beyond $65-70 per barrel. "Not just oil, supply of almost all commodities is higher than demand. I feel oil prices may slip further, which will be a big comforting factor for importing nations such as India," says Rao.

What about equity market investors? "Our view on equities doesn't change. We are buyers when the market falls. Last week's correction has made valuations of large-cap stocks attractive," says Naren of ICICI Prudential Mutual Fund.

Though domestic inflows into equities are comforting, the future trend will be dictated by foreign fund flows and global events. This means volatility. So, one must tread cautiously. "Stick to companies with positive cash flow and low debt. However, the most important factor is pricing. Don't buy a stock because its defensive as it may be costly," says Arthveda's Gupta, who feels investors, and not traders, will do well in the current uncertainty.

It is difficult to predict when the tide will turn. But one thing is clear. Investors will have to learn to live with volatility.