Tata Sons and Singapore Airlines come together again after a decade and a half. Analysts say the new airlines will increase competition for the existing players.

Prasad Menon (right), Chairmannominee of the proposed board of the new airline and Mukund Rajan, one of the directors, with Civil Aviation Minister Ajit Singh (centre)
Manisha Singhal
In November 2010, eminent industrialist Ratan Tata made a startling revelation. The then chairman of the Tata group expressed his frustration at having failed to start an airline in a joint venture with Singapore Airlines because he was unwilling to bribe a minister. "We went through three prime ministers and each time there was a particular individual that thwarted our efforts to form another airline," Tata said at a lecture.

Tata didn't reveal the name of the minister, but two years later, a former secretary at the Ministry of Civil Aviation did. In his book An Outsider Everywhere - Revelations by an Insider, retired bureaucrat M.K. Kaw wrote that it was C.M. Ibrahim who blocked Tata's bid to set up the airline during the 1990s at the behest of Jet Airways. Ibrahim denied the allegations. "The history of civil aviation in this country would have taken a different trajectory if Tata-Singapore Airlines had been allowed to float an airline," Kaw wrote. 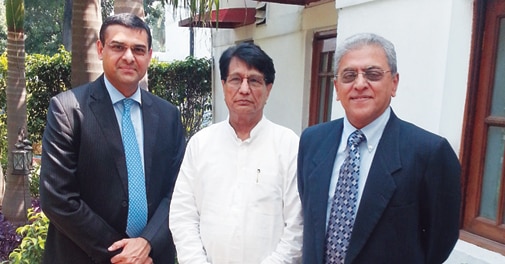 Prasad Menon (right), Chairmannominee of the proposed board of the new airline and Mukund Rajan, one of the directors, with Civil Aviation Minister Ajit Singh (centre)
The Indian conglomerate and the Singapore carrier are now making another attempt to come together. The two have joined hands to launch a full-service airline with an initial investment of $100 million. The Tata group will have a 51 per cent stake in the venture while Singapore Airlines will have the rest. The move comes barely seven months after the Tata group tied up with Malaysian low-cost carrier AirAsia to start a budget airline in a three-way joint venture that also includes India's Telestra Tradeplace.

Analysts have welcomed the latest development. Mark Martin, CEO and founder of Dubai-based consultancy firm Martin Consultancy, says the venture will open up opportunities not only for passengers, but also for airports and training facilities. "It's a creme de la creme kind of a joint venture with the most credible names in both the airline and corporate worlds," adds Amitabh Malhotra, Managing Director at investment banking firm Rothschild and Sons (India). But he also sounds a note of caution. The Tatas will have to walk a tightrope to keep the two ventures in harmony as there is little differentiation between low-cost and full-service airlines in India. "The price differential between the two services is not significant," he says.

The Tata Group will have a 51 per cent stake in the full-service carrier, while Singapore Airlines will have the rest

The deal makes sense for Singapore Airlines, too. "Singapore Airlines feels there is a market for a full-service product like theirs in India," says a person familiar with the matter. "It might see the AirAsia investment by the Tatas only as an equity deal." What makes matters a little tricky, however, is that Singapore Airlines and AirAsia are fierce rivals in international markets, especially in Southeast Asia. But AirAsia executives, who do not want to be named, say the two JVs will not be rivals and that their tie-up with the Tatas is exclusively for the low-cost segment.

The Tata group is tight-lipped about strategies for both ventures, saying only that it will be an active participant in operations and management of both airlines. The conglomerate wants to be a long-term player in the aviation sector, Tata group spokesman Debasis Ray said. He didn't give any timeframe for starting the full-service airline.

People familiar with the development say the Tatas will look for synergies in terms of schedules and pricing between the two ventures. The group could also look for common contracts for equipment, maintenance, repair and overhaul services, and aircraft. 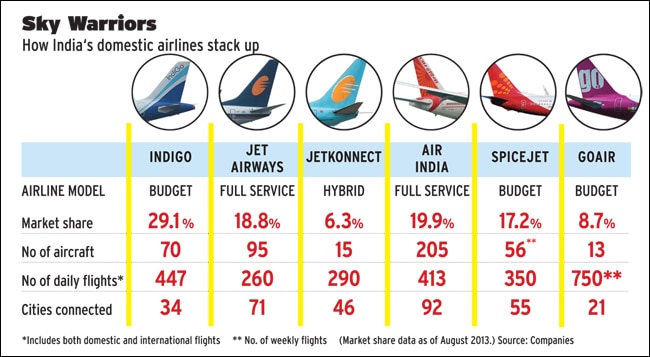 Critics, however, say the deal will not benefit the Indian aviation sector. They note that the easing of overseas investment rules in aviation last year was aimed at attracting foreign investors in existing airlines. Jet Airways has already agreed to sell a 24 per cent stake to Gulf carrier Etihad Airways while SpiceJet and GoAir are hunting for strategic partners. G.R. Gopinath, the pioneer of lowcost aviation in India, says the government should ensure there is no monopoly, and consider whether one company should have controlling stakes in several airlines. "I do not think it is desirable and regulatory bodies like the Competition Commission of India should look into this aspect," he says.

An analyst with a global consultancy says the new airlines will increase competition for the existing players. Existing full-service airlines Air India and Jet Airways will be directly competing with the Tatas' new airline. An Air India executive feels there is place for another full-service airline because of the gap created by the grounding of Kingfisher Airlines in October last year. A Jet executive feels differently. "The deal will lead to more competition and more capacity, resulting in tougher times for full-service airlines," he says. "It will be challenging for both Jet and Air India."