Tata Steel's move to get out of the UK shows it is getting realistic about its global ambitions.

The board of Tata Steel has decided that it will not inject more capital in its beleaguered UK business. It has also announced a plan to exit the country "in whole or in parts". This can be read in two ways. One, Tata Steel has accepted that its 2007 deal to buy Corus, of which the UK business was a part, for $12 billion was a mistake, and the people who struck it failed to rightly assess the risks involved. Two, the UK government has little concern for the Tata Group, a major investor that also owns car maker Jaguar Land Rover and Tetley Tea in the country.

The ambitious Corus acquisition was touted as a symbol of the arrival of Indian companies on the global stage. With this, Tata Steel, which was then one-fourth the size of the Anglo-Dutch steel maker, became the world's fifth-largest steel producer. But the timing and the price - 70 per cent above the stock price - raised eyebrows. Tata Steel paid $4 billion (»2.8 billion) from itss own pocket and borrowed the rest from Indian and foreign banks.

The party did not take long to end. The financial downturn in 2008 shrunk steel demand across the globe. Corus, later named Tata Steel Europe, announced job cuts in the Netherlands and the UK, and mothballed its Teeside Cast Products Plant. At the peak of the crisis, it was producing half its capacity. The second blow was struck by cheap Chinese imports that have flooded global markets over the past few years. 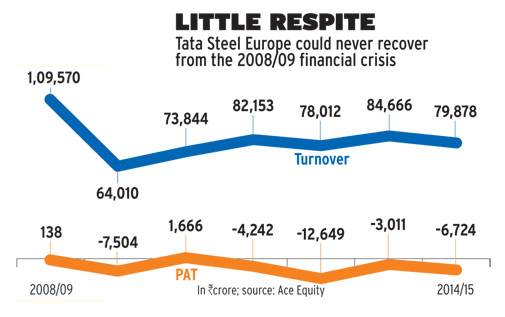 Click here to Enlarge
S.P. Tulsian, an independent analyst, says the company failed right from the deal negotiation stage. "And no recovery seems to be in the offing," he says.

In two steps, Tata Steel wrote off »2 billion, but the debt kept rising. In March 2015, the consolidated debt was Rs 80,700 crore compared to Rs 54,704 crore in 2008. A part of this was taken for building a three-million-tonne plant at Kalinganagar in Odisha and expansion of the Jamshedpur plant. Despite a $7-billion loan recast, which got over in 2014, the company has failed to reduce the debt.

While the company reels under the pressure of falling commodity crisis, those who led the acquisition have either retired or quit. B. Muthuraman, former Vice Chairman of Tata Steel, is not with the group. Arun Kumar Gandhi, the lead negotiator, has also left. Ratan Tata, under whom the acquisition was done and who never accepted that Corus was a bad investment, has given way to Cyrus Mistry as group chairman.

Karl Koehler recently stepped down from the post of managing director after steering the company for over five years. After announcing the second quarter results, he had told BT that the UK government did not listen to the company, which was suffering from Chinese dumping. Tata Steel said "…trading conditions in the UK and Europe have rapidly deteriorated more recently due to global oversupply, significant increase in third country exports into Europe, high manufacturing costs, weakness in domestic demand and volatile currency".