Government's GAAR proposal and the retrospective amendment are not discrete developments, but part of a trend that suggests an increasing level of aggression by tax officials. Aggression could eventually increase revenue, but comes with a problem. It has begun to negatively impact foreign investment into Indian companies.

Sanjiv Shankaran
Sudhir Kapadia, National Tax Leader at Ernst & Young, cannot remember a Union Budget as tough as the one Finance Minister Pranab Mukherjee presented on March 16. "Just the sweep of (the) changes is amazing," says Kapadia, referring to proposals on direct taxes.

The most far-reaching proposal was introduction of General Anti-Avoidance Rule (GAAR). The measure, aimed at curbing tax avoidance, would give revenue officials the right to look into transactions that do not currently attract tax. It was eventually postponed to 2013/14 , but not before generating much drama. About an hour before Mukherjee started the debate on the Finance Bill on May 7, the Bombay Stock Exchange Sensex had dropped 287 points from its previous close. Soon after he announced that GAAR would be postponed for a year, the Sensex began to rise and ended the day at 16,912.71, having gained 81.63 points. If investors got a breather on GAAR , Mukherjee would not budge on another key budget proposal: the retrospective amendment to tax indirect transfer of assets in India. This threatens to finally bring Hutchison Telecommunications' deal with Vodafone International in 2007 in the taxman's net.

GAAR and the retrospective amendment are not discrete developments, but part of a trend that suggests an increasing level of aggression by tax officials. Aggression could eventually increase revenue, but comes with a problem. It has begun to negatively impact foreign investment into Indian companies, especially smaller, unlisted ones.

The story actually goes back three years. Speaking at a conference in February, Sanjay K. Mishra, Joint Secretary, International Taxation, Ministry of Finance, said the tax department began to get more aggressive with international transactions in the wake of a dip in economic growth in 2008/09.

That year, the growth rate dropped to 6.7 per cent after recording an average of 9.5 per cent in the preceding three years. The slowdown, which came on the heels of a global financial crisis, acted as a drag on corporate tax collections. Simultaneously, government expenditure ballooned on account of a fiscal stimulus to revive the economy.

If India is bent on protecting its resources, international business appears equally determined to safeguard its profit. The outcome is an increase in tax disputes (see Growing Concern). In the three years ended March 31, 2011, the value of tax demand stuck in unresolved disputes almost doubled to `4.05 lakh crore, enough to meet all of the government's annual subsidies twice over.

For sure, the government is not alone in trying to protect potential revenue through measures such as GAAR. An outcome of the global economic slowdown is that governments the world over are doing the same.

On March 29, Canadian Finance Minister Jim Flaherty announced changes in transfer pricing (taxation of transactions between two companies in the same group) and thin capitalisation (capping loans that can be taken by a company) to plug possible leakages. A couple of weeks later, Taiwan's finance ministry announced it would resume levying capital gains tax on transfer of securities. 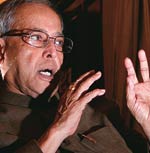 There cannot be a situation where somebody will make money on an asset located in India and will not pay tax either to India or to the country of its origin: Pranab Mukherjee
What seems to bother investors about similar moves in India is that they are announced without thinking things through. Established precedents, as far as the perception of taxpayers is concerned, are overturned suddenly.

The unintended consequence of a few years of enhanced aggression is hurting private equity (PE) investors. These long-term investors, who usually look for opportunities in promising companies in an early stage of their evolution, are beginning to find exit opportunities getting messy. Potential buyers have begun asking sellers to indemnify them from future changes in law that may have a retrospective impact.

Barings Private Equity has investments (including those in the pipeline this financial year) of about $1 billion in India. The current environment does not help the firm. "That expectation has started happening," says Sundaram Sivaramakrishnan, Partner & CFO, Barings PE, referring to buyers asking for indemnity.

Even India-dedicated funds are finding the going to be tougher. "A risk premium will get added to India, which was not there in 2008," says Sundaram. "They (investors) are willing to live with commercial risks. What they hate is these kinds of things (uncertainty caused by regulations)," he adds.

So, what is the cost of the uncertainty? Praveen Nigam, head of Amplus Consulting, gives a ballpark figure based on his experience in facilitating deals. "The cost to a company has increased by 20 per cent to 26 per cent (in the last two years)," he says. Foreign investors expect that much more from an investment in an Indian company to offset the perceived increase in risks, adds Nigam.

It was in this backdrop that Mukherjee's proposal to introduce GAAR led to apprehension. The first version was badly drafted, triggering fears of a tax regime that would overturn all established precedents. For instance, it said a taxpayer on whom GAAR would be applied would be deemed guilty until proven innocent, overturning a well-established principle of natural justice. Subsequently, Mukherjee said this provision would be removed.

"The problem (GAAR implementation) has been postponed by nine months," says Sundaram. "It doesn't prevent the government from going after existing structures with retrospective effect."

Until guidelines are issued, PE players feel GAAR will have a retrospective effect in practice as currently legitimate holding structures to route investments into India may fall foul of the law. Their investments typically come through a country such as Mauritius to capture tax benefits provided by that country's 30-year-old tax treaty with India. "GAAR should not override tax treaties," says Kapadia.

Even foreign institutional investors (FIIS), who are believed to be the main beneficiaries of GAAR's postponement, as people believe it gives them time to exit, seem perturbed. "It's not meaningful relief," says Mumbai-based U.R. Bhat, MD of Dalton Capital Advisors.

Moving beyond GAAR, Bhat wonders why India's tax policy and administration cannot be tweaked to get foreign investors to set up shop here. "Encourage us to open offices in India. Have a low level of taxation and create employment," he says.

That is unlikely to happen anytime soon, given the current level of distrust on the part of the revenue department. Mukherjee captured the mood when he referred to the Vodafone issue in Parliament: "There cannot be a situation where somebody will make money on an asset located in India and will not pay tax either to India or to the country of its origin by making some arrangements in certain tax haven areas."