After weeks of public outcry and intense media scrutiny, embattled UB Group Chairman Vijay Mallya has made an offer to settle outstanding loans of his now defunct Kingfisher Airlines (KFA). The bank consortium may find it hard to accept Mallya's offer for a couple of reasons.

Vijay Mallya: In the line of fire (Photo: Yashbant Negi)

After weeks of public outcry and intense media scrutiny, embattled UB Group Chairman Vijay Mallya has made an offer to settle outstanding loans of his now defunct Kingfisher Airlines (KFA). Mallya had provided personal guarantees for some of the loans availed by UB Holdings Ltd. (UBHL), the parent company of KFA. Cumulatively Mallya and his companies owe a 17-member bank consortium, led by State Bank of India, a sum of Rs 9,091 crore. Mallya through his lawyers in the Supreme Court offered to settle the outstanding loans for a sum of Rs 4,000 crore. While the whereabouts of Mallya, who left the country on March 2 is not exactly known - reports suggest he might be in UK - his lawyers told the court that he has held two rounds of negotiations with lenders via videoconference.

The bank consortium may find it hard to accept Mallya's offer for a couple of reasons. First, the principal sum that Mallya and his companies owe is around Rs 6,093 crore. If the banks agree to waive off the accrued interest, not even recovering the principal might not be a publicly palatable move. Even by his known public holdings alone, Mallya still has sufficient wealth to repay the entire outstanding. Then, if the banks agree to a large 'haircut' on their outstanding, it might set a precedent for other wilful defaulters. 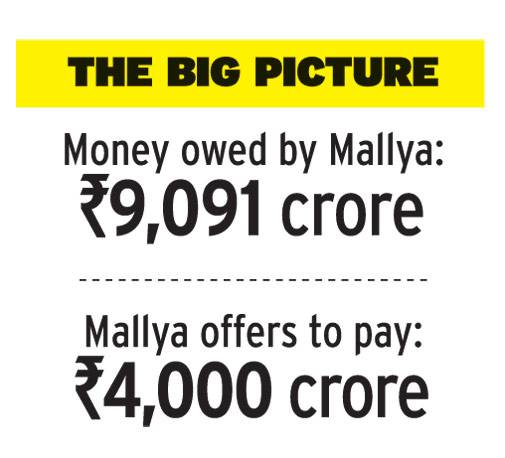 Shriram Subramaniam, CEO of InGovern Research Services, a corporate governance and proxy advisory, says that the current offer of Mallya might just be a bargaining trial balloon. "The banks might want a settlement where they recover bulk of their dues and move on."

A Karnataka High Court order on March 4, which restrains Mallya from selling or transferring beneficial ownership of his other holdings, might also come in the way of a settlement. Mallya will have to get this order stayed. Also, he might have to offload a part of his stake in United Breweries (UBL) to Heineken to substantially clear his dues but it might take time for this transaction to go through. Mallya owns about 32.8 per cent of UBL - some of it is pledged - which controls the beer part of his once large liquor empire. It must be noted that Mallya may have a stronger case than most people perceive. His personal guarantee is only to the extent of Rs 1,500 crore. If the banks refuse the settlement they cannot suo moto attach all his other assets without a lengthy legal battle. UBHL is a limited company and Mallya will claim that his liability is limited to the extent of his ownership and personal guarantees provided. Also, if he decides to step down from the boards of other companies, banks might lose any leverage they have, even if he is declared a wilful defaulter.