From boom to bust

After years of rollicking appreciation, companies that make up the BT 500 are going through one of their toughest phases in a long, long time. As stocks get mercilessly hammered, this may just be the time when the men are separated from the boys. Virendra Verma reports.

“In a year or two, investors will no longer be pushing up prices of stocks in sectors like real estate or telecom or financial services or infrastructure. Sure, they’re all industries whose prospects are bright over the long term. But there’s a limit to jacking up stock price in anticipation of performances expected two to three years down the line."

Top Guns
Last year, around the same time, the mood on the street was bullish, with the bull run showing few signs of petering of, and the Sensex rampaging into 20,000-plus territory. Although the subprime crisis had erupted in the US, few expected it to impact the great India story in the way it has now. Yet, there was always a fear lurking in the nooks and crannies of Dalal Street and stocks in pockets had raced way ahead of fundamentals. Concern over fundamentals of Indian companies were severe in the last two months (September-October) when the BSE Sensex fell by almost 38 per cent.

Those concerns were doubtless valid, what with price-earning ratios (P-Es) in overheated sectors like real estate climbing to as high as over 100 times. But when the equities did come tumbling down, few expected the markets to crash with such ferocity. Blame it on the US subprime crisis, greedy investment bankers or slack regulation on Wall Street or the resultant tightening of liquidity globally, but back home, a slowdown in the economy as well as in corporate earnings was only beginning to make its presence felt at the beginning of the year.

UB Group’s Vijay Mallya(L) with Naresh Goyal
When that slowdown finally revealed itself—now manifest in lower GDP projections and single-digit earnings growth for India Inc. in the second quarter of 2008-09—the writing was on the wall. The boom has got busted. The benchmark BSE Sensex is down by half, real estate is down in the dumps, manufacturers across sectors are cutting jobs and production, and yesterday’s outbound M&A adventurists are scurrying for funds needed to pay up for multi-billion dollar acquisitions made when valuations were near peak levels.

Amidst such gloomy conditions, the BT 500—where the rankings are based on average market capitalisation for the April-October period—serves as a handy barometer of India Inc.’s performance in tough times. Encouragingly, there are quite a few companies who were able to minimise the impact of the global meltdown, and actually show an increase in market value over the previous year’s corresponding period.

For the sixth year in a row, Mukesh Ambani’s Reliance Industries (RIL) grabbed the top slot of India’s most valuable company. Despite the carnage on Dalal Street, its average market cap increased by a handsome Rs 32,400 crore. Younger brother Anil, who took another company to the stock exchanges this year, Reliance Power, wasn’t so lucky, in taking over his elder brother in terms of market cap. The Reliance Power listing was expected to polevault Anil into a bigger league, but that didn’t quite happen. 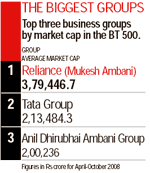 The biggest surprise, however, came courtesy the public sector pack, where the overall market cap for the 50 companies in the list increased by almost Rs 1 lakh crore; in percentage terms that works out to a 10 per cent increase. The biggest contributors to the massive rise in the value of the state-run companies were NMDC and MMTC, whose combined market cap increased by over Rs 1.3 lakh crore. Although the floating stock of these companies is less than 2 per cent, the increase in their share price shows that the market sees value in them (considering there is hardly any operator-driven activity in state-run companies). Marketmen point out that the government should take a cue from the massive rise and offload some more of its holdings in such companies; this will help release some pressure on government finances and improve market sentiment. 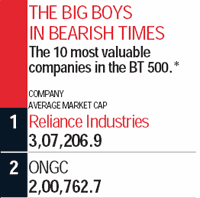 Click here to Enlarge
If 2007 was the year of real estate on Dalal Street—some nine companies got listed on the exchanges in that year—the current year saw these darlings of the stock market falling from grace. The share prices of top real estate players like DLF, Unitech, and Parsvnath Developers fell like ninepins. DLF alone lost over Rs 38,500 crore in market cap during the period of analysis in comparison. Unitech’s market value fell by a little over Rs 18,000 crore. These two companies alone account for an erosion of over Rs 50,000 crore of market value in the real estate sector. The sole real estate company that managed to increase its market value is Modern India, thanks largely to its relatively lower leveraging and a more stable revenue model of leasing, rather than outright sale (which most real estate players follow). Click here to Enlarge
If banking stocks were hammered it was more out of fear rather than for Indian banks’ exposure to the subprime crisis (which isn’t substantial). The biggest victim of negative sentiment and rumour mongering was ICICI Bank, whose market value eroded by over Rs 27,000 crore. Although there are concerns about the quality of assets ICICI Bank holds, its exposure to Wall Street isn’t huge—its exposure to Lehman Brothers was $80 million. The notable exceptions to the bearish trend are HDFC Bank and Axis Bank, with both their market values rising. One factor cited by analysts for this is that the business model of both these banks revolves around profitability rather than asset growth. 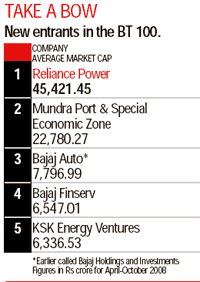 Click here to Enlarge
Long-term sustainability of a company is seen once its comes out of turbulent times. “This is not the first time we are seeing such times. The company (Tata Chemicals) has gone through such phases in the past,” says Homi R. Khusrokhan, Managing Director, Tata Chemicals, which acquired US company this year. He says the slowdown in the US will be offset by Latin American countries and new markets. There are companies which have accepted that the India’s corporate sector is headed for slowdown and aligning themselves with the reality. “Automobiles offtake has been hit by high interest rates, reduced liquidity, global financial markets and fuel prices,” says C. Ramakrishnan, Chief Financial Officer, Tata Motors. If one remembers, in 2000 Tata Motors, too, had gone through tough times just before the launch of Indica but came out of it unscathed.

mosimage There is concern for companies that raised funds through foreign currency convertible bonds and the London Inter-bank offered Rate. Such companies’ market value has already fallen substantially.

The sentiment on the Street is clearly bearish, and analysts feel the market has some way to go before it finds its bottom. In a technical analysis report, Enam Securities expects the Sensex to bottom-out in the region of 7,150-6,150. Now’s the time when the men in the BT 500 will be separated from the boys. This rough patch will provide an opportunity for cash-rich players to consolidate their positions, and result in shakeout of relatively weak players. Expect some big changes in next year’s BT 500.