Nilesh Khare, an accounts executive, till recently had little knowledge about the existence of bulls, bears and other creatures that prowl the Street. But last fortnight when the benchmark index on the Bombay Stock Exchange kissed the 17,000 mark, he decided it was time to step into the world of investing.

Till August, Nilesh Khare was as familiar with equities as perhaps Warren Buffett— one of the most successful and richest investors of all time who is known for his simple way of life—is with extravagance. A 33-year-old accounts executive with the Mumbai-based Phoenix Mills, Khare till recently had little knowledge about the existence of bulls, bears and other creatures that prowl the Street.

But last fortnight when the benchmark index on the Bombay Stock Exchange (BSE), the Sensex, kissed the 17,000 mark, he decided it was time to step into the world of investing. “It’s better late than never,” quips Khare. “So far I have invested Rs 35,000, in only ‘A’ group stocks. I am very sure I will not lose money as I have been studying stock movements and trends for the past two months via the internet, television channels and newspapers.” 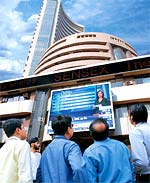 Cut to A.K. Hebbar, a 65-year-old proprietor of a 80-year-old lunch home in South Mumbai. Hebbar has been investing in equities for the past 42 years. He’s made truckloads of money. His strategy? Book profits at every rise. And when the 30-share Sensex hit 17,000 and 18,000 last fortnight, he was doing just that. “The strategy is to keep the portfolio at ‘x’ level. With every rise I book profits and bring back the portfolio value to the ‘x’ level,” says Hebbar. “Like many others I move with the trend. But that doesn’t mean I am not cautious. Today I am sitting on 20 per cent cash.”

Khare and Hebbar are two investors at two different ends of the stock market spectrum. They’re both at the right place at the right time.

Small wonder then that Khare was keen to join the party. Small wonder too that Hebbar is prudently skimming the cream off his stock portfolio. The billion rupee question: Who will be better— or worse—off in the medium to long term? Does Khare stand to make a killing with his late entry, or has he entered at the peak, and is he going to burn his fingers?

Even as euphoria spills on to the Street, and strangers to stock decide to embrace equities, the fear in pockets of the market is that things are moving too fast. That the gush of liquidity—triggered by a mid-September 50 basis point rate cut by the US Fed in the wake of the US sub-prime crisis—is pushing stocks to valuations that may just be beginning to look out of whack with corporate and economic fundamentals.

After all, FII flows have never been stronger— hitting a record high for the month of September, and October looks set to create yet another new high (see FII Floodgates are Open). Prior to that the defaults in the US subprime market saw FIIs (specially hedge funds) selling equity worth $1.9 billion in the month of August.

The rate cut considerably eased the liquidity situation, which resulted in global investors pumping billions of dollars in growth markets like India. In the 10 months to October (up to October 11), FII flows have been equivalent to a little over a quarter of the total foreign portfolio that’s entered Indian equities in the past 14 years (since the FIIs first stepped in India in 1993).

Such a surge of liquidity, point out the bulls, is justified as corporates are still delivering robust double-digit earnings growth—for the quarter ended September 2007, bottomline growth for the Sensex companies is expected to be in the 16-20 per cent vicinity.

“The sustained flow shouldn’t be surprising as there is hardly any market available among developing economies that is recording double-digit corporate earnings growth,” says Anil Chawla, CEO, DE Shaw, a global hedge fund that recently set up shop in India.

Adds Alok Sama, Founder & President, Baer Capital Partners, a UK-headquartered private equity firm: “The Fed has eased the liquidity position by making money relatively cheap. That money has got directed into markets that have potential to deliver impressive returns. And with India being considered a safe haven, it has attracted huge inflows.”

India is perhaps getting the largest chunk of foreign flows (China would be getting more, although no figures are available), but other emerging markets too are awash in cash. Korea, for instance, which has seen massive FII outflows since 2005, has begun finding takers.

Between September 20 and October 3, Korea witnessed an inflow of $441 million. Other Asian emerging markets like Thailand, Taiwan, Indonesia and the Philippines have seen an inflow of foreign money in the range of $1.65 billion to $5.9 billion till September 2007. And that’s all because of the Fed cut.

According to Citigroup, of the rate cuts in the past 20 years, the Indian markets showed negative returns only once (when earnings collapsed after the tech bubble burst in the early 2000s).

But on an average, returns from Indian equities have been attractive after a US Fed rate cut (see The Rate Cut Booster). Says David Wyss, Chief Economist, Standard & Poor’s: “The world is changing. Emerging markets are now driving world growth, which will offset the risk that’s associated with the Western world. That is why we are seeing huge interest in this part of the world.”

Everybody loves a flow of liquidity, but the worry may be the timing of this flood of foreign money. It’s entering Indian stocks at a time when the Indian economy is showing signs of sluggishness. The index for industrial production (IIP) for July 2007 was down to 7.1 per cent compared to 13.17 per cent in July 2006.

Other areas of concern include the persisting uncertainty on the political front—with the Leftists in the ruling UPA coalition threatening to pull the plug over a nuclear deal—the rupee continues to get stronger (going below the Rs 40 to the dollar barrier), thereby hurting exports, and crude oil prices are at an all time-high ($84 at the time of writing).

“Key risks that India faces are a sharp global economic downturn, surge in oil prices, loss of fiscal control because of the elections and the Sixth Pay Commission (the concerns are that the revised salary package of the central government employees may be a burden),” says Robert Subbaraman, Chief Economist Asia Ex-Japan, Lehman Brothers.

A potentially disastrous picture would be complete if corporate earnings flatter to deceive—anything under 19-20 per cent will be a disappointment. Stocks will then look even more expensive—they don’t look too cheap anyway, with the Sensex at a forward (year ending March 2008) price-earnings ratio (P/E) of nearly 23, making India one of the dearer markets in the world (see Goodbye Value?). 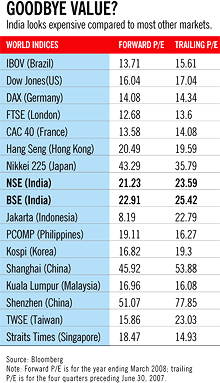 The counter view of course is that there aren’t too many places in the world where you can find companies delivering 20 per cent earnings growth. And that may be why Indian markets deserve a P/E revision (see the panel discussion: This is Still a Market with Legs). “Despite PEs rising quickly, I am still comfortable at the current levels and don’t think at 22 times six months forward, this market is overvalued,” says Michael Gordon, Chief Investment Officer, Fidelity Investments International.

“It’s difficult to find a market that has a strong economic growth as well as corporate earnings that are growing in higher double-digits,” he adds.

However, it’s only a small basket of companies that will be capable of delivering the goods on the earnings front. The larger market may find the going tough, and P/E ratios in the mid to small cap space may be already assuming unrealistic proportions. As DE Shaw’s Chawla points out: “The index is at euphoric levels, but a closer look will reveal that only 7-8 stocks have contributed to the rise.”

So, coming back to Khare, is he a millionaire-in-the-making or is he on the verge of losing his shirt? The answer to that will depend on the nature of Khare’s investment— if he’s thinking long-term, with at least a three-year horizon, he’s likely to be in the money. If he’s looking to make a short-term buck—hoping that the Sensex will gallop from 17K to 20K in quick time—he may find himself on losing street. Yet, the tragedy of the current rally is that it has been almost totally hijacked by foreign investors, with the retail Joe remaining sceptical, perhaps chastened by stock market scandals in the past 15 years.

Khare may still be a relatively early starter if you look back 10 years from now. The worry, however, would be if the retail investor sheds his scepticism too late— when the easy liquidity conditions dry up or economic and corporate fundamentals start going awry. The retail investor may then prove to be the bigger fool, holding shares offloaded by canny foreign investors. It’s at such times that bubbles begin to pop. The good news, however, is that we’re far away from such a speculative scenario.

At the time of going to press, the industrial growth number for August had just come in—it’s above expectation at 10.7 per cent compared to 10.3 per cent in August 2006. Says Subbaraman: “India has relatively sound economic fundamentals, and is in the early stages of economic take-off. We expect 10 per cent growth over the next decade and are expecting India’s economy to grow faster than China’s.” Khare may have made the right decision after all.