Life Insurance is a matter of solicitation. However, the rules of this “solicitation” game are changing rapidly and fierce competition is becoming a way of life. At last count, there were 21 life insurers operating in the country and a handful of others were waiting in the wings. The industry is getting into a frenzy—players are pushing hard to partake a share of this market.

The onset of competition also means that the role of the ubiquitous life insurance agent is evolving, expanding and, in some cases, witnessing a complete turnaround. Increased competition and proliferation of products are compelling agents to innovate and spend greater amount of time understanding competing products. With new products from mutual funds and insurance companies hitting the market every other day, the new-age agent is armed with knowledge not just about his own portfolio, but also about financial products from competing firms. Here’s how life insurance agents across the country are re-inventing themselves. 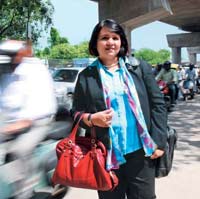 Shalini Kohli
The deft adapter
Shalini Kohli, 38/ Max New York Life
Shalini Kohli has a unique distinction within her company. She has been known to sign up at least 10 fresh insurance policies every month for the past 89 months. In insurance, where the product has to be sold, this makes her a star performer. For Kohli, joining Max New York Life (MNYL) as an agent in 2001 was a tough call as it went against the wishes of her extended family. But she has managed to fulfil the changing requirements of her customers. “Earlier, they were concerned about whether we would run away with their money. Now, they know about most of the products. However, the preoccupation is heavily with the unit-linked plans.” And that is a product that MNYL started selling only in 2004. Earlier, the emphasis was on traditional insurance products. In tandem with her company’s new positioning—Karo Zyaada Ka Irada—loosely translated as “Decide to Have More”, Kohli is on her toes as she spends an hour or so everyday on sharpening her skills. M.B. Nanjappa
Trusted trajectory
M.B. Nanjappa, 33/ING Vysya Life Insurance
M.B. Nanjappa waxes eloquwnt on inflation, markets, economy etc., in fluent English befitting an upwardly-mobile Bangalorean. This Advisor (as private companies call their agents) with ING Vysya Life Insurance sees a big difference between an insurance agent of yore and an Advisor of today. Today’s clients expect the agent to correlate the product with broader economic trends. “On many occasions, I may have visited a client just to sell my product, but have ended up helping him with his overall financial planning. They are concerned, not so much about which company I represent, but about whether I can be available to them in their hour of need,” says Nanjappa, who’s been in the profession for seven years.

The first two years of his insurance career were the most challenging. He spent most of his time explaining to people that ING Vysya, like LIC, sold policies. That problem—of an information gap— has ended in cities, but hasn’t in rural areas. His phenomenal success in selling policies has taken him, so far, to 11 countries on incentive tours. Nanjappa can now afford the luxury of being choosy; he meets up with just one or two clients a day. “Half of my deals come from people I have dealt with before. They reach me, valuing the trust we share in each other,” he says. Priti Kucheria
Ahead of the curve
Priti Kucheria, 45/ ICICI Prudential Life Insurance
What started as a trial exercise seven years ago has turned out to be a passion for the Priti Kucheria, one of the top agents of ICICI Prudential Life Insurance Company in Mumbai. A graduate in biological science and a housewife for 16 years, Kucheria was persuaded by her husband to appear for IRDA examinations (a mandatory exam for life insurance agents) in 2001. “It was fun to go back to the classroom,” she says. And this education continues. Kucheria has appeared for AMFI certification, which is mandatory for selling mutual funds. Last year, she also became a Certified Financial Planner (CFP) and this year, cleared the beginners’ module of the National Stock Exchange’s Certification in Financial Markets (NCFM).

Kucheria became a Million Dollar Round Table (MDRT) qualified agent within 4-5 months and it’s been an upwards journey for this super-achiever . Her mantra? “The idea is to be well-prepared for any kind of queries from clients. It gives me a kick when I’m able to do that,” she says with marked confidence.

Ramesh Chordia,
Keeping abreast
Ramesh Chordia, 44/ LIC
Ramesh Chordia, a mathematics graduate, WAS no stranger to financial planning—vehicle financing is his family business. His tryst with insurance began when he took an LIC policy for himself for a sum assured of Rs 10 lakh in 1999—considered high in those days. This also set him thinking about becoming an agent himself. In 2001, he was ranked 7th among LIC agents across India for the number of policies sold, and came within the top 25 agents under the “Highest Sum Assured” and “Highest Premium Earned” categories.

Chordia has had to reinvent himself at every step. “Even when I was being given awards by the LIC directors, I knew that I had to live up to the pressure of performing better. The only way this can be done is by keeping abreast of everything that happens in the financial world,” he says. He took sub-brokerships with larger distributors and has broadened his portfolio of offerings beyond LIC (which today accounts for half his annual income of Rs 12 lakh).

Chordia is planning to start an independent insurance broking firm (both general and life) by applying to IRDA for a licence—but that will be later. Right now, he is busy selling LIC policies to the most conservative, and pointing out risks, expenses, advantages and disadvantages of ULIPs to others. This exercise is proving to be invaluable. “People trust an agent if he does well by them. Otherwise, they could just go to a bank and buy the insurance product the bank sells them,” he says. Dara Sridhar
The old new biz
Dara Sridhar, 53/ LIC
Dara Sridhar has been in the business for the last 13 years and has been witness to how customer and professional expectations have changed over this period. Till eight years ago, there was only one main player, the state-owned Life Insurance Corporation of India. “That meant fewer comparisons in products,” says Sridhar. The nature of products has undergone a sea change since those days. “Compared to earlier, when there were mostly regular policies, which resulted in annual policy renewal commissions for agents, there is now greater spread of mutual funds or single premium policies with little scope for renewal commissions,” he adds. Subsequently, the way he transacts business has undergone a complete change.

Demanding clients have spelt long working hours for him, which now stretch to 8-8.30 p.m. from 5-5.30 p.m. earlier. Increased competition also means the need to spend greater amount of time understanding competing products. Sridhar turns to his LIC branch manager for advice on competing products and then decides on the right portfolios for his customers. “It is important that people divide their total investment corpus—keeping one part for life-risk cover and the other for investment through mutual funds,” he says. One thing, however, remains unchanged for Sridhar: he still starts his day by making calls to his customers reminding them of their policy renewal details.