It was a bizarre sight by all accounts. More than 50 foreigners, expat executives to be precise, were zipping around Bangalore in autorickshaws as they tried to complete a long list of ‘tasks’—ranging from making a chain of flowers to hugging a goat. Inquisitive onlookers were told: “This is a scavenger hunt.” The hunt and more such endeavours are part of the Bangalore Expatriate Club’s idea of letting the good times roll in a foreign land.

It was a bizarre sight by all accounts. More than 50 foreigners, expat executives to be precise, were zipping around Bangalore in autorickshaws as they tried to complete a long list of ‘tasks’—ranging from making a chain of flowers to hugging a goat. Inquisitive onlookers were told: “This is a scavenger hunt.” The hunt and more such endeavours— including wine tours to the nearby Grover Vineyard—are part of the Bangalore Expatriate Club’s idea of letting the good times roll in a foreign land.

Barbara Nolten Ifju
The club was started two-and-ahalf years ago to ease the transition experience of foreigners resettling in India’s IT capital and has, since, grown into a 450-strong organisation that meets regularly every week. The average age of club members is 33 years and it includes members from as many as 58 nationalities. “Bangalore is an ideal destination for expats because of its climate and, of course, its cosmopolitan culture,” says Barbara Nolten Ifju, a 29-year-old Hunga-rian and club member who has been in Bangalore for a year, and will shortly take up assignment with a Big Four consultancy.

Apart from offbeat interactions such as scavenger hunts, the club members meet regularly at the coffee shop of a five-star hotel. “Despite the 11.30 curfew in Bangalore (there is an 11.30 p.m. shutdown order for pubs), we like to have a good time. After pubhopping, we usually go to a friend’s place to continue the party,” says Nolten Ifju. This party continues in some form or the other across the major cities of India that have recently seen an influx of expatriate executives from across the world. While some nationalities do tend to stick together (think: Japanese and other Asian expats), most of them mix freely.

While there are formal outfits like the Overseas Wives Club in Bangalore (an 800-strong institution) and the ‘Twin-cities Expatriates Association (TEA) of Hyderabad and Secunderabad based in Hyderabad that provide a smooth changeover to the growing number of expats, it is the informal networks that perk up their social lives.

It’s golf that makes Sujin Park, 48, Chief Marketing Officer of LG Electronics India, and fellow South Korean nationals bond. Park spends his morning hours (6-11 a.m.) every Sunday with his three expat colleagues in LG Electronics India playing golf at the Jaypee Greens course in Greater Noida. “As soon as you go out to play golf together, you’re bonding in a way that you just can’t do otherwise. You’re sharing a skill,” adds Park as he sizes up the distance between the ball and the hole. Park’s handicap of 19 is one of the best in his group. Harriet Richards
Like Park, three of his team members find the golf club a perfect place to socialise with people from their own country. “I spend time hitting balls on the fairways, talking on anything but work. Since a round of golf easily takes up four-to-five hours, all you need is to be proficient at driving and putting, while the long walk gives you enough exercise and time to socialise,” says Hyun Chul Moon, VP (Finance & Accounting), LG Electronics India. Moon moved to India in January this year with his wife and two daughters.

Sujin Park
It is the power of sports that makes a community of Japanese connect in Haldia, 220 km off Kolkata. These Japanese, mostly engineers and top executives at Mitsubishi Chemicals Corporation’s (MCC) PTA (Purified Terephthalic Acid) plant in Haldia, have been living in the mini Japanese township called Sataku (meaning company residence or community living in Japanese) for the last two years. The commissioning of the plant and subsequent expansions have seen the arrival of many Japanese executives. While a few have returned, many—41 at present—stayed back in this quaint township, thousands of miles away from their home land. The next phase of expansion promises to bring in more Japanese to this new industrial hub in West Bengal.

These Japanese, aged between 40 and 50 years, are working with MCC in various capacities—DGM, GM, VP and Director. While they do socialise with their office colleagues and associates, beyond office hours and over the weekends, they prefer being amongst their own community. “Fishing, playing soccer, tennis, golf, volleyball, badminton, eating Japanese delicacies, watching Japanese movies and news channel—that’s how they want to enjoy their leisurely hours and Sataku has all these facilities,” says an MCC official. A few of them move out of Sataku and go over to Kolkata over the weekend to play golf; that’s because Sataku doesn’t have a full-fledged golf course, but a mini golf course.

The ties that bind 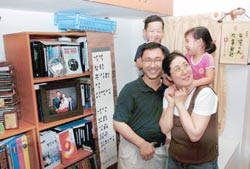 Hyeong Deug Kim
Kim has been in India since 1996—among the earliest Koreans. “I came here as a student under a scholarship programme and stayed on buoyed by the demand for Koreans who understand India better than Koreans who came in much later,” he says. Today, the Korean community in Chennai is close to 2,000 and Kim is planning some organised activities for this “huge” population. He is putting together a plan of action for social interactions. While Kim could take a leaf out of his Bangalore counterparts’ book, he has the right credentials of his own. Kim is doing a PhD at IIT Madras on Cross Cultural Management and how “Koreans Can Motivate Indians”, and has a wealth of experience that he is sharing with other Koreans to make them feel at home in India. Kim “plans to stay on for another decade at least.”

For Korean expats in Chennai, there are frequent lunch and dinner parties; small parties are held in the three Korean restaurants in Chennai in typical Korean style. The food and the service are reminiscent of home—here, the youngsters grill the meat, layer the sauce and serve the elders first. Another favourite haunt for Kim and his family is the desi Chettinad Karaikudi restaurant.

A home away from home

Quentin Staes-Polet
Home is where the heart is for Quentin Staes-Polet, 40, a Belgian in Mumbai, who considers himself an economic migrant. After five years of regular business visits to India while he was with IBM Digital, Staes-Polet has made Mumbai his permanent residence for the past two years.

A technology geek, he has started his own venture Kreeda Games, a gaming company in India. “I am comfortable here than anywhere else now,” he says, adding: “I started my career in Hong Kong and stayed there for eight years. But I made only three friends. Today in Mumbai and across India, I have more Indian friends than I ever had before. They are like the friends I had in my childhood. I am a citizen of the world and not a citizen of any country. Indians are very hospitable unlike in Hong Kong where you are either a local or you are an expat,” he explains. Asked whether he mingles with his own Belgian community in India, he replies with a vehement no—“I have my own set of friends with whom I go out.” He enjoys inviting friends over and cooking for them. “I do that quite often,” he says.

On his favourite subject India, he says that the most interesting aspect of the country right now is its booming economy. “One of the reasons why I started my career in Hong Kong first was its booming economy and the fact that people there were willing to listen to you and you could dream of doing what you wanted to do. It is a similar situation now in India, which is what makes it such an interesting place,” says Staes-Polet.

In Chennai, 44-year-old Australian Harriet Richards found India so interesting that she decided to take a break from her travel job and take a permanent posting with a corporate house in Chennai. She had pursued a Masters of Asian Studies with a focus on Indian philosophy where she studied and still continues to study Vedas, Ashokan Buddhism and the Upanishads. She learnt Hindi and is currently learning Tamil (as she is based in Chennai). Richards was in India between 1990 and 1992 as a diplomat and later visited the country frequently. From 2004, she held positions of market research and consultancy, and joined Amoha Education last September as General Manager (Corporate Training).

Richards loves the exposure to a foreign culture and the challenges of living in one. She has settled down in Chennai to expose herself to temples, sculpture, architecture, the fine arts (classical dance and music). An avid Bollywood buff—more for the dance and music routine and costumes—Richards likes watching old classics like Do Bheega Zameen. Her next project: learning Sanskrit. “I find Indians very welcoming,” she says. So, while she interacts with others in her community, she is currently more preoccupied with her interactions with Indians—whether in office or in her frequent “Discover India” trips.

“During Pongal (in January), I went to a village. Every household welcomed me so profusely and treated me to mountains of Pongal that it was not possible to refuse,” she says, laughing. Richards is a vegetarian, makes filter coffee at her apartment and is planning to learn from her neighbours and Indian friends the “art” of making idlis and dosas.

The social life of these expats is not without its fair share of challenges. “Bangalore’s chaotic traffic is a major challenge for expats and very few members drive themselves to meetings,” says Nolten Ifju. But that hasn’t stopped some members from taking the odd chance; while 50 of them may have braved the odds and hailed unreliable autos for their scavenger hunts, others have braved the elements by travelling to Ladakh, boogeyed to Bollywood hits and taken walking tours in Bangalore. The language, weather, food and the innate diversity of India—all pose a social challenge for the expats. That, however, has not stopped them from living it up while making the most of the potpourri of cultures.