Prasoon Joshi is emerging as the Indian star in the international ad fraternity.

Prasoon Joshi
He is one of a new breed of professionals who has popularised the use of an Indian idiom, and a distinctly Indian voice, in Indian advertising. If Piyush Pandey of Ogilvy & Mather is credited with pioneering this trend, then Prasoon Joshi, who started his career under him in 1992, is clearly the one who’s taking the theme across the world. In fact, the latest Alpenliebe ad for Perfetti Van Melle with actress Kajol and an alligator is now being used in all its global markets without any adaptation. Oh yes, and not to be forgotten is the HappyDent palace commercial that scored twice over at Cannes this year, bagging a Silver for the campaign and a Bronze for its use of music, making Joshi the highest scorer of metal in 2007 with a tally of four at this rarefied annual event held in France. In the process, HappyDent has entered the Top 10 most awarded campaigns of the world (Gunn Report).

And while discovery of the Indian idiom itself may be a story in progress, Joshi, Executive Chairman, McCann Worldgroup India & Regional Executive Creative Director (Asia Pacific), has already revived the fortunes of this relatively stagnant IPG Group agency in India. The 2007 Gunn Report places McCann India as the third most awarded agency in the Asia Pacific Region, even as he’s scored as the #1 Creative Director in Asia in the MEDIA magazine ratings.

These developments brought the top bosses of McCann Worldwide rushing to India in October 2007. John Dooner Jr., Chairman & CEO, McCann Worldgroup, declared in an interview to this magazine (Read Big Acquisitions Are Not Part Of Our Growth Strategy) that Joshi would lead overall creative leadership as he was inducted into the Worldwide Creative Board of McCann Worldgroup. Clearly, he’s the man to track, not just in terms of the way he’s climbing up the hierarchy, but also in terms of the way clients and businesses are latching on to his work.

At quite another level, Joshi has been making serious inroads into Bollywood, winning accolades for his dialogues and lyrics for films like Rang De Basanti, Fanna and more recently for yet another Aamir Khan starrer, Taare Zameen Par.

O&M’s Pandey recalls an amusing anecdote from the late 1990s when, soon after Joshi moved to Mumbai from Delhi, he took his then protege to the Filmfare Awards to introduce him to the Bollywood fraternity: “We messed up on the dates and landed on the wrong day.” But that hasn’t stopped his career as a Bollywood lyricist from taking off. “Today, he’s doing extremely well for himself. I’m proud of him,” Pandey says.

Interestingly, people were heard calling him a “seriously funny” guy when his Thanda Matlab Coca-Cola series hit the national consciousness in early 2000. But it’s nearly impossible to slot the 38-year-old Joshi. In his many avatars, he is an ace copywriter, a jingle maker and a poet who pens hit songs for Hindi films in his spare time.

Says former colleague Santosh Desai, MD& CEO, Future Brands: “Prasoon has command over craft and music; he’s a poet; his style of story telling and his sheer ability to source material that is both authentic and which reflects many parts of reality are indeed unique. He brings layers and textures to his ads, which is remarkable.”

For instance, Joshi coined the term Yaaran Da Tashan (attitude of friends) that became part of daily parlance, but he’s as evocative sans the copy. The ad that bagged a Golden Lion at Cannes in 2003 showed a man sleeping peacefully on a busy pavement, with a pile of Coke crates protecting him from the blazing sun.

It was inspired by a fleeting glimpse of a porter sleeping in the shade of building at Hapur station in Uttar Pradesh.

A trail of influences is behind Joshi’s works, almost all of them inspired by things innately Indian. In a Chlormint ad, he uses a classical singer to deliver some of the most hilarious lines: “Sayyan more guppi, dete nahin puppi”. His films songs and dialogues, too, mesh the mood in modern India with romantic lyricism and new-age rap. This allows him to connect instantly with his audience who are, at once, Indian in their ethos but global in outlook. 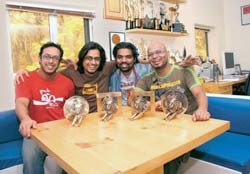 Prasoon Joshis winning team
The now retired Arthur, who started his career in 1964, says Indian advertising has gone through clear phases—from being print-led to now being lead by new media such as television and digital media. “Earlier, creative people were just that. Today, thanks to people like Piyush Pandey and Prasoon Joshi, creative people are also getting to be leaders,” he says.

Joshi has a parallel in his former boss Pandey, but where he’s clearly different is in his ability to push the envelope further. “Piyush brought in a certain earthy, Indian style. Prasoon goes further; he has a deeper appetite for intellectual introspection and, therefore, is able to deal with complexity and more cerebral subjects with greater ease. There is a sense of effortlessness to his work,” says Desai.

But the real stamp of approval comes from his clients. “Prasoon is not your typical guy who writes only good copy. He’s many thing rolled into one and what works really well for us is that he’s never happy. There have been instances when we’ve approved an idea, but he has still come back to us and with suggested changes,” says Prakash Wakankar, Managing Director, Perfetti Van Melle India.

Joshi’s ability to quickly come up with lyrics and ideas is also something that makes him popular with his clients. “I met him one-and-a-half years ago when our account moved to McCann. I called him when he was in New York to write something for us for an internal exercise. He gave us the lyrics the next day, and it was set to music,” says Vineeta Bali, Managing Director, Britannia Industries. Then, Kashmira Chadha, Director, Marketing, Coca-Cola India, says Joshi has the ability to get across with simple language without having to take recourse to Powerpoint presentations.

But there are detractors, too. Some people who have been associated with him in the past say he has been unable to move beyond television and radio, while others blame his larger-than-life persona for scaring others from taking up positions under him. “What will anyone else do if Joshi is good at everything?” asks one such ad professional. Another of his peers says Joshi’s creative flair clouds the agency’s thought process, adding that there aren’t too many strategic thinkers in McCann.

Joshi is quick to defend his turf. “My only answer to these people is our results. During my tenure, McCann has bagged so many awards that I have no place to sit in my room. Also, we’re winning new businesses even as we are making a difference to our clients,” he says. That’s very true.

In fact, what most overlook is the visible difference his work has made to his stakeholders. For instance, the 1997 Voluntary Disclosure of Income Scheme (VDIS) campaign—“30 per cent tax, 100 per cent peace of mind”—that he devised for the Ministry of Finance helped then (and current) Finance Minister P. Chidambaram mobilise upwards of Rs 10,000 crore. Then, Thanda Matlab Coca-Cola campaign became a national slogan and enabled the cola giant to steal back the thunder from rival Pepsi’s Dil Mange More punch line. Not surprisingly, he and his agency have won a rich haul of over 400 awards till date.

But Joshi is not content to sit on his laurels and is already looking ahead. “While I do write for films, my first love is advertising and I really think it’s a modern art form,” he says. He’s now looking forward to building his team further and feels that people have a wrong notion about him working on everything.

“How much can I do? Yes, I am very closely involved with some accounts, but my people work alongside me, and also on their own, and they are a very talented bunch,” he says.

Joshi is now moving on to higher goals and is going global. He’s involved in three ads for Coke in Indonesia and one in China; the group has sought his involvement in its campaigns for US and UK companies on their home turfs. McCann wants him to be part of the campaign it is planning for Microsoft in the US and for Wall’s ice creams in the UK. His crowning glory: he has been declared Chairman of the Cannes Jury for 2008. Clearly, he’s the man to watch in India’s advertising world.