Locals are willingly giving up land to embrace industrialisation in Jharsuguda, discovers BT’s Ritwik Mukherjee, who is mistaken for a landbuyer himself. Work underway at Vedanta Alumina plant
Life is full of surprises as I discovered on my trip to Jharsuguda, a mineral-rich district in Orissa that looks well set for a changeover. The changeover was expected ever since Jharsuguda became part of Naveen Patnaik government’s Master Plan for cities beyond Bhubaneswar; what is unexpected is the reaction of locals. While land acquisition conjures up images of stiff resistance and violence elsewhere, Jharsuguda over the last 2-3 years has experienced a smooth transition from agriculture or no agriculture to industry and is now fast emerging as an industrial hub.

“If you know how to take along local people with you and if you are equally concerned about their livelihood, you shouldn’t have any problem when you need land for industry,” says a senior Vedanta official.

The company has already built “Ma Sambaleswari Nagar”, the rehabilitation township for 148 displaced families and is building a state-of-the-art hospital. A spokesman at the district collectorate, which acquires land for the government, points out: “These places were never known for their fertile land. So, if the local landowners find that they actually stand to gain by offering their land to industry, why would they resist?”

He sold off his land
Some other companies like Jain Infra and Jain Steel & Power have taken the other, equally smooth, route of purchasing the land directly from the owners. “It’s always easier to buy the land directly from the owners. You pay them the right price and get possession of the land,” says Pradip Sen, Group Senior Vice President, Jain Group of Industries.

We (BT lensman and I) get a feel of what the local people have in mind, as we get down from our hired car at a village called Bhashma, on the banks of river Ib. The locals muster around us to find out if we are prospective landbuyers. They also ask us if we plan to carry out some development work like bridges—quite a contrast to the reporter’s experience some months ago at Singur.

They animatedly tell us that their neighbours have already sold their land for a good price to “some company”. The group of locals, however, is not clear how this land will be used.

Jain Group’s Sen elaborates on that. “There will be a modern township— possibly the first satellite township with a nine-hole golf course in the state on the banks and surrounding the river,” he explains. 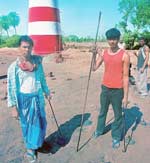 Not surprisingly, the locals are hardly complaining. Says Shapath Pathan: “We were working with a local brick field for small daily wages. But with these large companies coming up with large projects, things look brighter for us.”

Another local Sushil Dash seconds him promptly: “At the end of the day, what matters most is how comfortable we are with what we earn and how much we can send to our families.”

The surprises don’t end here. As we stand at what the locals call “The China Town” at Jharsuguda, we encounter a large number of Chinese engineers and support staff. 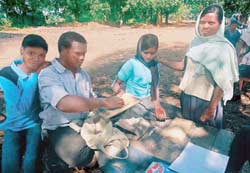 Labourers collect tokens against their wages
There are as many as 700 Chinese engineers and support staff from SEPCO Electric Power Construction Corp. of Shangdong, China, one of the largest power companies in China. SEPCO is building a 1,215 MW coal-fired power plant for Vedanta Alumina and this 700-strong workforce is working at the aluminium smelter plant here. “We don’t feel we are so many miles away from our home. We live together like a community. We speak Chinese, eat Chinese cuisine, celebrate Chinese occasions and we watch Chinese television programmes,” says W.Wang of SEPCO’s Comprehensive Department. There are more expats, though not sizeable, from Australia, Germany and France, we are told. Construction site of Jains
As part of the Master Plan, the state government has also approved setting up of a model satellite city between Sambalpur and Jharsuguda to meet the needs driven by rapid industrialisation in the area.

The local development authority has reserved a 2,000-acre site for this purpose.

This township will have provisions for 24-hour solar energy supply and an eco-friendly environment. As the first flight from this mineral-rich district of western Orissa promises to take off shortly, so does the place itself.