In an industry that is barely 12 years old in India, a new breed of microfinance entrepreneurs has emerged on the scene, armed with management techniques and technology, and a burning desire to get big quickly. 7 Indian Microfinance Institutions in Forbes' 50 listGod of small credit - Vikram Akula

In an industry that is barely 12 years old in the country, the second generation of microfinance entrepreneurs has already burst onto the scene. What’s different about Microfinance Entrepreneurs Ver 2.0? Most of them are either MBAs or have given up lucrative corporate jobs; unlike the previous generation of microfinance institutions (MFIs), which typically started as non-governmental organisations (NGOs) without any proper structure or business model, the newer lot is registered either as non-banking finance companies (NBFCs) or Section 25 companies, which essentially is a non-profit structure in a corporate form. Also, none of them is looking at microfinance as teary-eyed charity. Sure, they love working with the poor, but what they offer is financial services for the poor and, often, are funded not by grants but professional investors. Accordingly, they are leveraging technology, hiring professionals, improvising on existing MFI models, and looking beyond the traditional microfinance bastion— and, indeed, pure microfinance itself—of south India. Says S. Viswanatha Prasad, whose two-year-old fund, the Bellwether Microfinance Fund, is the first of its kind: “We want to help build the next generation of MFIs by expanding the (microfinance) pie.” Adds Sitaram Rao, an industry expert: “They are all fiercely independent and some of them are using their lives’ savings to start microfinance in remote regions.” So, just who are these new kids on the MFI block? One of them was a principal architect of Vikram Akula’s SKS Microfinance, another is the son of a former Chief Minister, two others helped build Cashpor, a UP-based MFI, yet another worked with a leading financial institution before diving into microfinance, while the other three boast of equally impressive track records. Take a look: 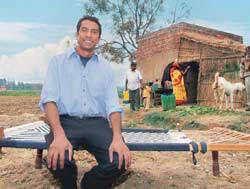 Harsha Moily
On a vacation from his job at the London offices of Lombardi Odier, a boutique private equity firm, Harsha Moily found himself looking for a way to enter the burgeoning microfinance industry. It was March 2005 and the industry was red-hot. Rather than join one of the many mushrooming outfits, Moily, son of former Karnataka Chief Minister Veerappa Moily, decided to branch out on his own with MokshaYug Access, an MFI that focusses on not just microlending but also creating a rural market for insurance and retail in Bagalkot, northwestern Karnataka.

Rather than duplicate the business model of existing MFIs, Moily decided to offer a broader basket of services to his customers, including insurance. “We are just over two years old and have a long way to go in this industry,” says Moily, whose dancer-wife is also a director with the firm. Just the same, Moily, an MBA from Thunderbird, has ambitious goals for his start-up. He wants to have at least 100,000 customers in three years and expand his services to include retail and lifestyle products.

Banker of the GT road

Manab Chakraborty’s Mimo Finance lends to the poor of Uttarakhand.

Manab Chakraborty
Fondness for and familiarity with Uttarakhand settled the issue of where Manab Chakraborty would set up his MFI after he decided to return to India in 2005. A development sector professional with 30 years of experience spanning Asia, Africa, North and South America, Chakraborty, 52, runs an MFI with a difference. MIMO, which is the brand name and Shah Sandhu Finance—the firm’s name, does not make any hard and fast distinction between productive finance and consumption finance. “I am even keen to sell gold to my clients. Since we are not allowed to collect savings, gold could be an excellent medium for our clients to invest in an asset,” he says.

Uttarakhand needs help. Chakraborty says more than 35 per cent of the state’s population of about 85 lakh people live below the poverty line. “We want to expand along the GT Road because the poor in urban and urbanising areas need financial services as much as the rural poor,” says Chakraborty. His ambition is to reach 4 lakh customers in three years and a million by 2015—mostly in northern India. “Microfinance is very satisfying. You help others and you help yourself,” says the man who owns 30 per cent of the MFI. 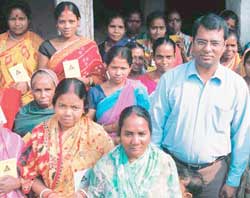 Subhankar Sengupta
The best management tip that Shubhankar Sengupta received was not at the Institute of Rural Management Anand (IRMA), where he studied, but from Vijay Mahajan, Indian microfinance pioneer and founder of BASIX. “Don’t read management books, read good literature,” was Mahajan’s constant refrain at BASIX, where Sengupta worked for 8 years, rising to senior management level before he quit in 2006 to set up ANG Resources (Arohan is its brand name). Mahajan’s point: think out of the box.

Sengupta has taken the advice to heart. While the rural poor are undoubtedly a bigger market for MFIs, the 34-year-old’s Arohan has chosen to focus on the urban poor. For good reason. Remarkably, 25 per cent of West Bengal’s population is estimated to live in Greater Kolkata—that is within 50 km radius in the districts of North & South 24 Parganas, Howrah, Hoogly & Nadia—creating one of the world's largest human habitats (nearly 25 million). Arohan’s urban clients range from microentrepreneurs to small and marginal farmers to wage labourers. So far, the MFI, which has been funded by Mahajan’s flagship firm Bhartiya Samruddhi Finance and angel investor-cum-journalist Swaminathan S. Anklesaria Aiyar, has a customer base of 23,000 with a cumulative loan disbursement of Rs 16 crore (loans typically range from Rs 5,000 and Rs 10,000 each). What’s next for Arohan? “It’s time to scale up—from raising the loan limits to bringing in more innovative products to expand geographical coverage area,” says Sengupta.

Comrades in arms
Two friends and a common mission.

Rakesh Dubey & Anup Kumar Singh
Rakesh Kumar Dubey and Anup Kumar Singh were just 11 years old when they first met in school near Allahabad. Over the 25 years since, they’ve done many things together, including help found David Gibbon’s MFI, Cashpor, in 1997, and more recently (2006) their own microfinance outfit, Sonata Finance. “After eight years of working with Cashpor, one day we decided to start a new MFI in central Uttar Pradesh, as this part of the world needs more than one institution to feed the huge demand,” says Dubey. Singh is the CEO, while Dubey is the CFO of Sonata Finance.

Thanks to their long experience in the industry (the duo has trained at Grameen Bank in Bangladesh, besides Nepal and south India), Singh and Dubey have come up with a hybrid model for their MFI that uses both agents and the selfhelp group (SHG) concept. Here’s how: The agents are used to help get groups of customers, and the groups themselves are allowed to be larger than Grameen Bank’s limit of five and closer to SHG’s size of 10. “The idea is to give greater flexibility and reduce costs,” says Singh. Sonata has over 30,000 clients and a total outstanding of Rs 16.2 crore—a growth of over 300 per cent in one year. In August 2007, Sonata even acquired another MFI to get a toehold in Madhya Pradesh.

Kishore Kumar Puli is looking beyond micro-credit, and the poor.

Year of Founding: July 2007
Focus: The poor in rural and periurban areas, and also educational institutions in villages
Disbursals: Rs 3.5 crore
Plans: Disburse Rs 300 crore by 2013
Current Equity: Rs 2 crore
Funding Plans: Have an equity base of Rs 10 crore by 2013; also tap banks and other partners for debt Kishore Kumar Puli
It’s 30 minutes to 1 p.m. and Kishore Kumar Puli is getting anxious. We are on our way to the Rajiv Nagar slum near Mancherial town of Adilabad district, some 300 km north of Hyderabad, and Puli, 36, is keen to keep his appointment time of 1 p.m., and understandably so. Rajiv Nagar is where the business plan of Puli’s Annapurna Financial Services is unfolding. Formerly with ICICI Bank as its regional head (Microfinance division) for Karnataka, Puli set up shop barely five months ago but has racked up 4,500 clients to whom he has lent over Rs 3 crore.

What makes Annapurna different from other MFIs, the MBA from Hyderabad’s Osmania University, says, is that it is looking at both poor and near-poor clients (for example, personal loans for Class IV government employees), and also rural educational institutions. “The bottom line is we intend to offer as many products as possible to serve the needs of varied segments of the clientele,” says Puli, who’s also done a longish stint at Vijay Mahajan’s BASIX.

Like some of the other MFIs featured in this story, Annapurna is leveraging IT to lower costs and improve delivery and service. Puli’s goal is to halve transaction costs to 7-8 per cent and grow from four branches to 70 over the next five years. “We want to reach out to the untapped and under-served regions and hit total disbursals of Rs 300 crore in that time,” says the laptop-toting Puli. No wonder, he is a man in a hurry. Praseeda Kunam
When Praseeda Kunam returned to India in 2003 after a four-year stint abroad, she wasn’t sure what she wanted to do: go into the corporate mainstream or do something else. As fate would have it, Kunam, who has an MBA and a Master’s degree in Information Management from Washington University in St. Louis, got an offer from Vikram Akula’s SKS Microfinance to take charge as Director of Operations in Hyderabad. After working with SKS for two-and-a-half years, Kunam, 33, moved on to join ABN AMRO Bank to help MFI start-ups to build capacity, “but I missed being closer to the field and decided to set up a development initiative of my own,” she says.

Rustling up Rs 8 lakh, Kunam set up Samhita Community Development Services as a Section 25 company. “Our entire approach is geared towards establishing the microfinance distribution channel and using it to deliver various non-financial services that are so desperately needed by the poor,” says Kunam. Courtesy her husband, Balachander Krishna Murthy (an IIT and University of Chicago alumnus), Kunam plans to leverage IT to track her customer’s performance on social, economic and health fronts. “The possibilities are endless, but we will take one step at a time,” says Kunam, who picked Rewa because the region ranks low on most development indices.

Speedy money
4,500 customers within a month of launch? This man has done it. 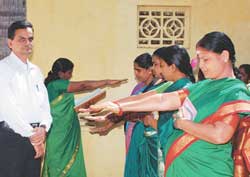 P.N. Vasudevan
For 4 months before he set up UPDB Microfinance (soon to be renamed Equitas), Pathangi Narasimhan Vasudevan visited several microfinance NGOs and visited their ‘markets’ to find a value-added niche for his start-up. As it turns out, it was time well spent. In just a month of being set up, Vasudevan’s Chennai-based microfinance NBFC has disbursed loans of Rs 5.50 crore to 4,500 customers in and around Chennai. “That’s because we bring professionalism to the table,” explains the 45-year-old Vasudevan, who quit a Rs 55-lakhper-annum job with Development Credit Bank to launch UPDB.

Smart use of IT is what drives UPDB’s spectacular performance. It has introduced a centralised processing system at the corporate office so that the various branch offices can focus on selling and send the documents to the head office by courier. A web-enabled software in turn hooks up all the 9 branches with the centralised database, giving the branch managers access to application status, customer payment details etc on a real-time basis. This has resulted in lower overheads at branches and, ultimately, lower cost to customers. “We offer loans at 25 per cent with a rebate of 2.5 per cent for prompt payments because I don’t want to pass on high costs of overheads to customers,” he says. No wonder the customers are queuing up. Vasudevan’s next brain wave: ESOPs for the field force, which typically comprises high school graduates. “It is to make them understand that they would participate in the profit,” says Vasudevan. This is one gesture his team wouldn’t have too much trouble understanding or appreciating.