By 2017, India’s energy requirement is expected to be 100 GW more than previously estimated. That’s why it is imperative for India to have nuclear power as a critical component of its energy basket. Shalini S. Dagar does a threadbare analysis. More new jobs with nuke-deal spin-off

Every day that I have been Prime Minister of India, I have tried to remember that the first 10 years of my life were spent in a village with no drinking water supply, no electricity, no hospital, no roads and nothing that we today associate with modern living. This nation gave me the opportunity to ensure that such would not be the life of our children in the foreseeable future,” Prime Minister Manmohan Singh was planning to say in Parliament during the trust vote. 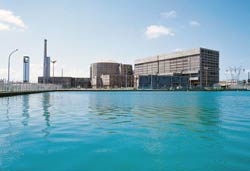 Tarapur Atomic Power Station: Indias plants run below capacity
That he never managed to deliver his speech does not matter any more. For Singh won a decisive, if somewhat controversial, trust vote in Parliament. Swiftly on the heels of that vote of confidence, key prime ministerial aides—eight of them, including two ministers—fanned out to different world capitals to lobby for the passage of the India-specific safeguards agreement through the International Atomic Energy Agency (IAEA). Prithviraj Chavan, Minister of State, Prime Minister’s Office (PMO), who met the Italian and Chinese leadership on this issue, says: “It is a paradigm shift that India, which has never signed the Nuclear Non-Proliferation Treaty, is getting an exemption.

It was never a cakewalk.” However, on August 1, it turned out to be precisely that as the IAEA endorsed the India-specific safeguards agreement. Now, the crucial Nuclear Suppliers’ Group (NSG), which is expected to meet on August 21, needs to give its nod.

That means more hectic days ahead for the PMO. But leaving aside the strategic and political implications, the nuclear push by India has significant economic consequences.

Although few are willing to put a figure on the business potential of Npower in India, BT had estimated in an earlier story (A $9-Billion Blast, Business Today, December 31, 2006) that potentially, a $9-billion (Rs 38,700 crore at current exchange rates) market is waiting to be addressed over the next five years. The multiplier effect of this investment has not been assessed. Terms of N-dearment: The N-deal has significant economic consequences
Once the much-awaited approvals, from NSG and the US Congress, come through, India is expected to emerge as a major player in what is being called “a nuclear renaissance” across the world. Concerns over rising fossil fuel prices, energy security and greenhouse gas emissions have given a fillip to nuclear power. As a result, countries that had put nuclear power on the back burner, are now re-examining their options. According to an International Energy Outlook 2008 projection, nuclear electricity generation is expected to be 31 per cent higher by 2025 than the forecasts of only five years ago. Nuclear proponents also push their case on the basis of cost efficiency and safety though there are dissenters as well.Yet, for India, the argument is fairly simple—its mammoth energy requirements make it imperative for it to tap all available sources. And nuclear power is crucial. A recent McKinsey & Co. report forecasts that if India continues to grow at an average of 8 per cent over the coming decade, its demand for power will soar from 120 GW at present to 315-335 GW by 2017— 100 GW higher than most current estimates.

One of the authors of the report, Vipul Tuli, Partner, McKinsey & Co., believes that while “coal will continue to dominate our fuel mix for a long time to come, nuclear energy will be a critical option a few decades later as India’s emissions rise”.

In the short term, high prices of oil and natural gas may improve the economic viability of coal-fired generation for coal-rich India. Simultaneously, emissions, too, will rise—both in absolute and per capita terms—as the economy trots along (See Energy at What Price?). Adi Godrej, Chairman of the Godrej Group, says: “It’s very important that India reduces its dependence on hydrocarbons.” Other clean energy sources, such as wind or solar power, are not expected to contribute more than 20-30 GW in another decade.

Add to that the energy security angle—India remains an importer of key energy-related products, including coal—and the case for nuclear energy becomes even more compelling. In the 1970s, concerns about supply security were a major cause of nuclear expansion in both Japan and France (see The World Leaders). India seems to be poised on a similar cusp. Environment thinktank TERI’s Executive Director, Leena Srivastava echoes Godrej’s sentiment.

“Nuclear energy is definitely an attractive option as it is a clean form of energy that will help reduce carbon emissions,” she says.

If the NSG and the US Congress vote in India’s favour, as both are expected to, many doors will open up for India and its corporate sector. International trade in nuclear materials, technologies and equipment will open up immediately.

Currently, a uranium shortage leads to Indian nuclear reactors functioning at less than 65 per cent capacity. With the deal, fuel supply will not be an issue. “India will also get access to uranium exploration and mining technology, which will allow us to explore and tap uranium deposits within the country,” says S.K. Jain, Chairman and MD, Nuclear Power Corporation of India (NPCIL), the only operator in India at present, apart from sister company Bhavini.

Subsequently, “we have a roadmap laid out. One option is that we can continue to buy reactors on commercial terms through existing government-owned companies,” says Chavan. Here, apart from NPCIL it is companies like NTPC, which could have a role to play.

Adi Godrej, Chairman, Godrej Group
Jain believes that if four sites are chosen, each with 6-8 reactors, then a nuclear park, capable of generating 30,000-40,000 MW, could become a reality. General Electric, a large supplier of nuclear equipment, is waiting eagerly for details of the plans. GE’s India chief, Tejpreet Singh Chopra, says: “Nuclear equipment is a core business for us. We can provide competitive technology solutions in this area, but this is a long-term play. Much will depend on the policies announced— the sites, the scale, technology and other specifics.”

In the interim, it is companies like the Hyderabad-based MTAR Technologies that will prosper. The privately-held precision equipment maker is a major supplier to NPCIL. “We are geared up quite well to undertake not only current NPCIL orders but have also gone in for expansion to accommodate future technologies and new global projects,” says K. Vamshidhar Reddy, Executive Director, MTAR Technologies. Probably sensing the opportunity and promise, US private-equity giant, The Blackstone Group, last year, invested $65 million (about Rs 260 crore) for a 26 per cent stake in MTAR. 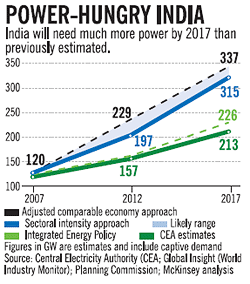 Tejpreet Singh Chopra, President and CEO, GE India
Apex industry chamber FICCI believes that nearly 400 large and small Indian companies could benefit immediately from the deal as nuclear commerce with India begins. For larger companies such as Larsen & Toubro, the opportunities are huge. L&T, incidentally, already has a tie-up with Japanese company Mitsubshi Heavy Industries. V. Raghuraman, Principal Advisor, Confederation of Indian Industry (CII), points out that spin-off benefits, in terms of the opportunity to develop a nuclear supply chain in India, too, are considerable. “There is no question of putting a number to the opportunity. The whole world will be our market,” he says.

However, private ownership of atomic utilities will need amendment of the Atomic Energy Act, 1962. That, Chavan says, may depend on political compulsions. There will, however, be significant challenges going forward. Funding is likely to be one such issue.

CII’s Raghuraman says that “at present, financial institutions may not be ready to fund these capitalintensive projects”. According to a recent report by Moody’s, nuclear generating technology is very costly, potentially reaching over $7,000 per kilowatt (KW) of capacity—by some estimates almost twice as much as new, scrubbed coal-fired power plants and three times as much as new, combined cycle natural gas plants.

But that’s way into the future. For now, the government’s immediate priority is to steer India’s nuclear ambitions through the two remaining finish lines and, thus, end the N-Apartheid that has contributed to keeping India energydeficient. The rest will follow, almost as a corollary.