Finance Minister P. Chidambaram’s populist scheme will not make much difference to farmers in the suicide-prone districts of Maharashtra and Andhra Pradesh. The day the FM announced the Budget, six farmer suicides were reported. Thirty-four farmer suicides were reported in the 10 days following the Budget. T.V. Mahalingam finds out why the waiver is a "giant hoax".   Loan waiver will not benefit most farmers: Left'Money for farmers will end up in party coffers'Full coverage: Budget 2008

Number of farmer suicides rising
Pola is the harvest festival in Maharashtra. On this day every August, farmers in the agricultural belts of the state bathe their buffaloes, paint their horns and parade them around their villages.

As the villagers of Bhadumri (in western Vidarbha) were busy sprucing up their cattle in August 2006, 35-year-old Anil Shende, a marginal farmer, staggered out of his two-room mud hut and collapsed. The father of two toddlers, Shende had gulped down a bottle of pesticide. He owed about Rs 70,000 to moneylenders and another Rs 15,000 to the local co-operative bank. His 24-year-old wife, Vandana, was away at her mother’s house in Adilabad to celebrate Rakhsa Bandhan. By the time she rushed back to Bhadumri, her husband was no more. Her woes were just beginning.

Like many poor people, Vandana could not afford to grieve for long. She had four mouths to feed, including her ageing mother-inlaw and the two children. Vandana began to do rounds of the local tehsil office to get “relief”. After seven months and several trips to the nearest town, she received a cheque for Rs 10,000 from the Prime Minister’s National Relief fund. That cheque, she claims, bounced.

The Government of India, which presides over a trillion-dollar economy and plays proud landlord to 53 greenback billionaires, could not honour a cheque for a little over $250 (Rs 10,000).

A few more trips and lots of outrage from local NGOs and the media later, she finally got “relief”. Last fortnight, Union Minister for Panchayat Raj, Youth Welfare and Sports Mani Shankar Aiyar visited her. “He asked questions and took notes... like you,” says Vandana, with an ironic smile.

She now works at a cotton farm, earning a little over Rs 20 a day. Two lanes away, 27-year-old Sunanda Bhindare continues to work on her nine-acre plot sowing cotton. Her husband committed suicide in early 2006. When moneylenders began to land up at home demanding the money he owed them (close to Rs 50,000), he killed himself. His wife used most of the cash she received as relief to square off the debts.

Bhadumri is not the only village with such hard-luck stories. Hundreds of villages in the Vidarbha region of Maharashtra have reported cases of multiple suicides.

Between 2001 and the end of January 2008, close to 4,000 farmer suicides were reported in the western Vidarbha region, which includes Amaravati, Akola, Yavatmal, Buldana, Washim and Wardha districts. Most of these suicides—nearly 2,700—were reported over the last two years.

Given this context, will Finance Minister P. Chidambaram’s Rs 60,000-crore loan waiver stop, or even stem, the wave of farmer suicides in Vidarbha?

“The waiver is a giant hoax played on the people of Vidarbha,” says Kishore Tiwari, who spearheads the Vidarbha Jan Andolan Samiti, a farmers’ advocacy body. “Farmers in Vidarbha will not gain as the average land holding here is above the stipulated two hectares. Agriculture Minister Sharad Pawar’s bastion in western Maharashtra will gain, not the farmers in Vidarbha who are killing themselves,” he adds. 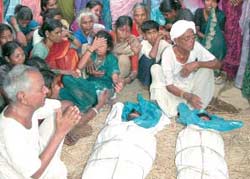 They tell a grim tale
Farm activist Vijay Jawandhia agrees with Tiwari, pointing out that the average land holding in the region is about 7.5 acres. In districts like Yavatmal, where farmer suicides are peaking, almost 54 per cent of farmers are not eligible for the waiver. The state government, meanwhile, has been placing advertisements in newspapers claiming that Rs 9,310 crore in loans to 3.3 million farmers in the state will be waived. How much of this will come to Vidarbha, which is the epicentre of the state’s agrarian crisis, is not clear. Some estimates put the number at less than Rs 1,700 crore. “There are cases in western Maharashtra of rich farmers—with computerised drip irrigation facilities on two-hectare plots—getting waivers of over Rs 20 lakh. But poor cotton farmers, with seven acres of land in Vidarbha and Rs 30,000 in debts, get nothing. Is that just?” asks a livid Tiwari.

At Tiwari’s office in Pandharkawada, a queue of farmers patiently awaits its turn to air its problems. Among them is 58-year-old Ganganna Thotavar, who owns four hectares of land and owes nearly Rs 2 lakh to a local urban bank. With a daughter’s marriage around the corner and a handicapped son, Thotavar’s hands were already full—or so he thought. Last fortnight, he was served a notice by the bank to cough up the amount or face seizure of his land. The barefoot Thotavar is not eligible for a waiver under the Budget announcement.

“The suicides are just the tip of the iceberg. The dead are better off… those still living are around only because they are not dying,” says Jawandhia. “The per capita debt here is far lower than in western Maharashtra and the land holdings much higher. The Budget package will not work because it does not consider the socio-economic realities of the region.”

Jawandhia could not have put it better. The agrarian crisis is a hydra-headed problem that cannot be tacked by a quick-fix solution like a loan waiver. Vidarbha’s farmers face challenges on several fronts.

According to government data, of the 1.76 million farmers in six districts in western Vidarbha, only 25.3 per cent availed of institutional credit in 2005-06. That number will probably have declined considerably since a majority of them have defaulted on repayments over the last two years.

A fact-finding team of the Planning Commission observed in May 2006: “In Vidarbha, out of 3.2 million cotton growers, 2.8 million are old defaulters of bank loans and not eligible for fresh institutional credit. Hence, taking loans from private money lenders and falling into a debt trap is inevitable for them.” However, if the loan waivers make them credit worthy, then things may change.

The escalating suicide count in Maharashtra tells its own story. In 2003, 144 farmers committed suicide. By 2005, 431 cases were reported. The next year that number tripled to 1,448. Observers recall that a couple of key changes happened between 2003 and 2006. First, the Maharashtra government withdrew the “advance bonus” of Rs 500 per quintal for cotton in May 2005, citing accumulated losses of over Rs 4,000 crore to the state exchequer. “Cotton farmers in Maharashtra were protected by the Cotton Monopoly Scheme in the state. Under that scheme, farmers used to get Rs 500 more than what was declared as the minimum support price by the Government of India. When the government withdrew the bonus in 2005, farmers who had received Rs 2,500 per quintal in 2000 were forced to sell cotton at Rs 1,900. Given the rising costs of inputs like seeds, pesticides and fertilisers, most farmers went into debt,” says Jawandhia.

The other big change was the introduction of Bt cotton in the region. Government reports acknowledge that Bt cotton yields have been higher than non-Bt varieties.

However, in rain-fed regions like Vidarbha, Bt cotton faces problems of yield and attacks from certain pests. Also, the cost of Bt cotton seeds is far higher than that of non-Bt cotton seeds. “Farmer advisory and extension services in the region were found to be extremely poor… Farmers need to be well informed about the technological factors and risks pertaining to growing Bt cotton, particularly in low-productivity rain-fed regions, its susceptibility to certain types of insects and its market prospects,” reads the report by the Planning Commission’s fact finding team.

Prolonged and pervasive indebtedness have wreaked havoc on the social fabric of the region. About 50 per cent of farmers kill themselves during the festival and marriage season which falls between August and December. A government study found that nearly 92,000 farmer families had one very ill person who does not have access to a doctor.

Till basic problems like these are addressed, loan waivers will remain akin to offering mouth fresheners to somebody with a bloody jaw. Activists like Tiwari feel that the loan waiver could have been structured more effectively. “The government should have just waived the loans of all farmers with Rs 40,000 or Rs 50,000 in debts. That would have been more effective in Vidarbha,” says Tiwari. In fact, a 2006 study by Indira Gandhi Institute of Development Research found that 86.5 per cent of farmers who killed themselves were indebted and the average debt size was Rs 38,444. For now, the Maharashtra government has said that it is working on a package tailored especially for the Vidarbha region. But given the fact that two earlier packages— one announced by the Prime Minister (Rs 3,750 crore) and another by the state government (Rs 1,200 crore)—have failed to change ground realities, it remains highly unlikely that this package will succeed in providing any long-term, or even significant, relief.