Rural to the rescue

Stagnant urban demand, collapse of export markets and relative rural prosperity are drawing companies to the countryside. Which means that the slowdown has not impacted the rural markets as much as their urban counterparts, reports Tejeesh N.S. Behl.Reform to Re-farmOn the farm trailColour of money 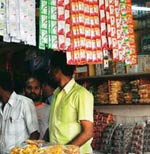 Suresh, a grocer from Behra village in Bihar’s West Champaran district, had to shut down his shop whenever stocks ran out: he had to restock from not one distributor but several, located in bigger villages nearby. Time lost, income forgone. Then he opted for a mobile phone connection through Airtel for Rs 1,200, which included a handset. Today, he sits in his shop and calls up his distributors to stock up. Of course, Suresh is also lucky that he has power back-up to recharge his handset—considering the perennial power cuts in his state. (Those without power back-up have to trudge 8 km every four days to Baisukhva village where a makeshift charging station, powered either by a diesel generator or truck batteries, allows users to charge their handsets for Rs 5 per shot.)

It’s probably this resilience that’s prompting companies such as Airtel, facing slower urban sales following the global financial meltdown, to make a dash for the hinterland despite the lack of basic infrastructure. “We started focussing on the rural markets about a year-and-a-half ago, and today 60 per cent of all our new consumers are from the rural areas,” says Sanjay Kapoor, Deputy CEO, Bharti Airtel. That means 1.68 million new rural customers a month. Airtel has been adding some 2.8 million subscribers every month since the past one year.

Does that mean a rural resurgence that could shore up India Inc.’s bottom line or at least partly make up for a sluggish urban India? “Rural demand has grown by 20 per cent in the last two quarters, with no downgrading of brands—if anything, people in rural areas have moved from unbranded to branded items,” points out Pradeep Kashyap, Founder & CEO of the rural marketing consultancy, MART. A case in point, he says, is the foray of products such as the malt-based drink Horlicks and Dove soap among the upmarket rural segment.

The unprecedented agricultural bull run with four consecutive years of positive growth has meant that the rural consumer is now well poised to aspire for the same products as his urban counterpart. “The slowdown has not impacted the rural markets as much as their urban counterparts simply because the upswing was also not felt here—with the result that the rural populace is playing catch up with the urban consumers and hence fuelling demand,” says Anil Jain, Managing Director, Jain Irrigation Systems, which supplies drip irrigation systems to farmers. That explains why companies are scrambling for a first-mover advantage. Airtel’s rival from the A.V. Birla Group, Idea Cellular, has made a beginning in the Maharashtra countryside.

“Every second new subscriber is from the rural area. Yes, part of our focus also has to do with the fact that growth in the number of urban subscribers has slowed down,” observes Pradeep Shrivastava, Chief Marketing Officer, Idea Cellular. In fact, many believe that telecom operators may have reached saturation point in urban areas, with penetration at 80 per cent. Compare that with a rural penetration level of 10-12 per cent and the rural rush is understandable.

Opportunities galore
But it’s not just low-input products and services that are permeating the heartland. Companies such as Maruti Suzuki and Hero Honda are also driving their brands and products deep into uncharted territories as four- and two-wheeler sales shrink elsewhere.

“Earlier, we had a lot of decentralised rural marketing efforts, which were largely dealer-driven. Now, they are more centralised. This includes a 500-strong sales force on the full-time rolls of our dealers to target rural sales specifically,” points out Anil Dua, Senior Vice President, Marketing, Sales and Customer Care, Hero Honda. The company, in end-2007, also launched a rural vertical Har Gaon, Har Aangan (Every village, every house). According to soft data, its share of rural sales has gone up from 38 per cent in 2007-08 to 40 per cent in 2008-09.

Maruti Suzuki’s foray into the heartland was a direct consequence of the slowdown. “We started it as a test case in 2007—driven by the slowdown, which impinged on the urban consumer’s propensity to opt for vehicular loans,” says Mayank Pareek, Executive Officer, Marketing & Sales, Maruti Suzuki. He says that in contrast to the urban market, where 80 per cent of the vehicle’s cost is financed, rural consumers pay cash for up to 60 per cent of the price tag. (A rural consumer does not share two big headaches of his urban counterpart—house loan EMI and transportation costs).

For the companies, the initial results have been encouraging. While Maruti Suzuki has seen the share of its rural sales jump from 3.5 per cent of the total in 2007-08 to 8.5 per cent in 2008-09, Bharti Airtel’s rural penetration has increased from 6 per cent in 2007-08 to 12.6 per cent, according to data available till February 2009. Airtel’s average revenue per user (ARPU) in the rural regions has increased from Rs 100 to Rs 150 in the same period.

That indicates an increased cash flow for the rural consumer, attributed in part to the 40 per cent-plus increase in minimum support price (MSP) of wheat and rice over the last two years. While wheat’s MSP has risen to Rs 1,080 per quintal in 2008-09 from Rs 750 per quintal in 2006-07, the figure for rice in the corresponding period has jumped to Rs 850 from Rs 580 per quintal. Then, there’s the NREGS jobs scheme, even though its success is debatable. Last but not the least are the farm loan waiver and the declining prices of consumer durables.

“Today’s rural consumer also demands a flat screen television, rather than a CRT television and he prefers foreign brands like LG and Samsung. There’s also been a steep increase in DTH connections in rural areas,” states Kashyap of MART. His findings are in consonance with Nokia’s, which says that the rural consumer doesn’t just want an entry-level handset priced below Rs 3,000, but mid-range models between Rs 3,000-6,000. “Earlier, a new rural consumer went for a single-colour basic handset; today, he’s increasingly choosing a feature-rich colour display phone,” says Vineet Taneja, Director Marketing, Nokia India. Cracking the rural code
Going rural wasn’t like taking a walk in the park. As the Bihar example shows, operating in an environment without the basic infrastructure in place poses its own challenges. So, while Nokia realised the need for a long-life battery given the lengthy power cuts, or pest-resistant covers, Idea Cellular introduced a rural calling card that charges only 50 paise per minute for a local call.

“In our after-sales service, we have introduced the concept of ‘Care Vans’, which go from village to village every month following a fixed route to cover a cluster of villages in one outing,” says Taneja. Then, there is customisation. Samsung, for instance, introduced stabiliser-free operations in its direct-cool refrigerators to take care of voltage fluctuations and silver-nano feature in semi-automatic washing machines for use in areas where the water quality is not good.

Pradeep Kashyap
But it’s not only value for money but also value add-ons, which get the rural hordes, say marketers. Both Bharti Airtel and Idea Cellular, apart from providing service messages in the local lingo of the subscriber, also provide alerts on commodity prices at the nearest wholesale market and even English language tutorials. The most popular value-add service though, is music, especially in the local dialect of the subscribers.

Sanjay Kapoor
For a market that’s extremely price conscious, being cheap alone will not do, say companies. “In terms of pricing, recognising that an average rural wallet will have less money than an urban wallet, we lowered our ticket sizes,” acknowledges Kapoor of Bharti Airtel. Accordingly, instead of a Rs-30 recharge coupon valid for a month, it launched a Rs-10 coupon valid for 10 days for the rural markets.

Interestingly, though, both Hero Honda and Maruti Suzuki eschewed special prices and discounts, focussing instead on brand recall. “The strategy is to build brands and market the product’s value as an economical and easy means of transportation. Besides, rural purchases of vehicles are closely linked to fairs and festivals as that is the time the rural consumer has large amounts of disposable cash,” argues Hero Honda’s Dua. Anil Dua
Here to stay
While exciting, the rural upsurge will not sway companies away from their urban growth plans. “The agricultural boom has come only in the last 3 to 4 years and the rural economy does not have enough strength as yet to compensate for an urban slowdown,” explains Jain. But what is happening now is a full-throttle foray into the rural markets—thanks to the financial meltdown—as opposed to the half-hearted attempts earlier in the garb of pilot projects to grab the attention of rural India. “For us, the main challenge was to educate the rural subscriber in technology,” recalls Shrivastava of Idea Cellular, which, for its entry into Andhra Pradesh’s interiors, used the folklore art form of Burra Katha (a travelling theatre troupe) to build brand awareness. Click here to Enlarge
Airtel, apart from providing photocopier machines to facilitate documentation formalities for new subscribers, is also leveraging technology through GIS maps to plan its investment rollout. Roadshows, too, have acquired a new halo as companies reach out to an under-served market—case in point, a density of 2-3 per 1,000 people for automobiles in rural India versus 12-13 per 1,000 people in urban. Kashyap says so far India Inc. has largely been flirting with the rural consumer. "It's time to get married," he quips.