News
Magazine
In This Issue
The route to 'dharmacracy'

Management practitioners are turning to the introspective wisdom of the Bhagavad Gita and other Indian texts as an alternative to rapacious capitalism as they believe it balances the pursuit of wealth and material success with the mastery of the self and the quest for inner happiness. E. Kumar Sharma reports. 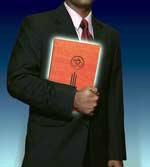 Come January and Vijay Govindarajan, Professor of Strategic Innovation and Management at Tuck School, Dartmouth, US, will be in India with a group of 50 USbased executives. His mission? “I have arranged for Sadhguru Jaggi Vasudev to spend a day with the executives. The Sadhguru teaches spirituality. I want western executives to understand how spirituality informs leadership,” says Govindarajan, who feels there is a need to temper capitalism and individual gains with compassion. “We celebrate individual financial success. But I have seen executives who are successful on the outside—they have multiple homes, fancy cars, etc.—but these same executives are not happy inside. Spirituality is about seeking inner peace. It is needed more than ever now.” In fact, in February this year, the Indian School of Business (ISB) set up a research centre called the Centre for Leadership, Innovation & Change, that, among other things, is looking at this area of Indian philosophy in management. The idea is to research deeper into it, and, perhaps, include it in the management course.

Capitalism is facing a crisis—and desperately needs a remedy. “There are many reasons for this,” says Govindarajan, adding that a central problem is that there is something rotten at the core of American corporate values—it measures success by short-term personal financial gains. That needs to change.

Balanced approach
This is where Indian philosophy, which balances the pursuit of wealth and material success with the mastery of the self and the quest for inner happiness, comes in, offering, as it does, an alternative to the “greed is good” ethos that has characterised the neo-conservative economic thinking pervading the corporate corridors of the US and much of the western world. The deeply introspective, yet practical, wisdom contained in ancient Indian texts such as the Bhagavad Gita, Mahabharat and the Vedas also stands in stark contrast to the language of conquest popularised by management theories based on Sun Tzu’s sixth century BC classic, The Art of War.

Says T.V. Mohandas Pai, Member of the Board and Director, Human Resources, Infosys Technologies: “When people are in trouble, they always fall back on ancient wisdom to see what went wrong.”

It is not without reason, therefore, that recently, the ISB’s Centre for Leadership, Innovation & Change organised its first international conference on “Igniting the Genius Within.” One of the topics discussed was Indian philosophy. “The idea,’’ says S. Ramnarayan, Professor and Member of the Management Committee of the Centre, “was to expose students and management professionals to broader management vision and to look for integration of various perspectives.” 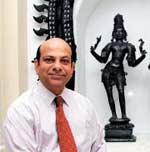 Vijay Govindarajan
Inclusive capitalism
So, what specifically does Indian philosophy offer that the current thought in management doesn’t? Says V. Krishnamurthy, former Deputy Director, BITS Pilani: “The introspective qualities of ancient Indian philosophy are missing in the modern materialistic corporate chase. The latter is always focussed on getting things accomplished (without bothering much about the cost).” It means that the cornerstone of corporate philosophy should be something bigger than money. This is not to say that businesses should stop, or even slow down, their pursuit of profits. It simply means that corporate leaders should adopt a more holistic approach, incorporating the interests of all stakeholders— like customers, employees, society, etc.—instead of remaining focussed only on narrow shareholder value.

C.K. Prahalad, Paul and Ruth McCracken Distinguished University Professor of Corporate Strategy at the University of Michigan’s Ross School of Business, calls it Inclusive Capitalism. In this context, he says corporate social responsibility, so popular among companies and their spin meisters these days, is at best a transition phase for a company. “That’s where you learn that there is more to business than just profit maximisation. The final stage will be reached when companies realise that dealing with the impoverished in the world is not something they should do only once in a while. The key lies in thinking differently about the very purpose of business,” he says.

C.K Prahalad
Back to India, Via the US
But ISB’s initiative is not really as path breaking as it looks. Ironically, B-schools and management thinkers in India have woken up to the ancient wisdom contained in our holy books only after these ideas were embraced by the West. Leading management gurus of Indian origin such as Govindarajan, Prahalad, Ram Charan and Mohanbir Sawhney, McCormick Tribune Foundation Professor of Technology, Kellogg Shool of Management, among others, have disseminated this wisdom through their body of works for years now. In an article on the subject in 2006, BusinessWeek had quoted Dipak C. Jain, Dean of Kellogg School of Management, as saying: “When senior executives come to Kellogg, Wharton, Harvard, or Tuck, they are exposed to Indian values that are reflected in the way we think and articulate.”

Business organisations have woken up to the value of Indian philosophy in a big way over the past six years, says Swami Chidananda, Joint Secretary, Rajghat Education Centre, Krishnamurti Foundation India. From a corporate perspective, we have to make decisions based on what is good for the customer and the community—in other words, we have to think from an ecosystem perspective, says Prasad Kaipa, Executive Director, Centre for Leadership, Innovation & Change, ISB; and CEO Adviser & Coach, Kaipa Group. “Then, the Tata Group’s takeover of Corus and Jaguar-Land Rover and its belief that it can turn those companies around, have made the western world quite curious about Indian management approaches,” he adds.

It is early days still, but many other B-schools are looking at this space. IIM Calcutta has a management centre for human values, and the FMS in Delhi and some others are also looking at it.

Prasad Kaipa
Ethical dharmacracy
M. Rammohan Rao, Dean of ISB, feels Indian philosophy is relevant “because business should not just be about one self but about the society and the environment it works within”.

Pai of Infosys has an interesting take on the growing importance of Indian philosophy in management.

“The fact is that we are Indians; so, consciously or unconsciously, the country’s value system resonates in what we do.” And not only does it hold true for the companies but also for individuals leading them. He cites the example of Infosys Chairman & Chief Mentor N.R. Narayana Murthy: his philosophy of simplicity, many will argue, is really a reflection of pan-Indian values.

The Tata Group, which, arguably, practices inclusive capitalism with greater zest than any other business house, is another example. Says Radhakrishnan Nair, Chief Human Resource Officer, Tata Steel: “Wealth generation is important but it should be kept in trust to improve the communities in which we live. The Parsi motto of ‘good thoughts, good words and good deeds’ is extremely rich in its effort to elevate human suffering. A true Tata person believes in simple living, high thinking and being genuinely affectionate.”

According to Prahalad, the idea is to develop a system that places the individual at the epicentre of corporate strategy. Such a goal, though, looks unattainable in the short to medium term. Can it ever be reached? That’s impossible to answer with any degree of certitude, but if it is, then India would have made a defining contribution to management science. Says Kaipa: “It may be time for what a Los Angeles Times reporter proposed last year—that the US should move towards Dharmacracy not Democracy.”
Published on: Nov 27, 2008, 5:18 AM IST
Posted by: AtMigration, Nov 27, 2008, 5:18 AM IST