Amazon used tech to shift to hybrid model of working and build a diverse, agile workforce during the lockdown 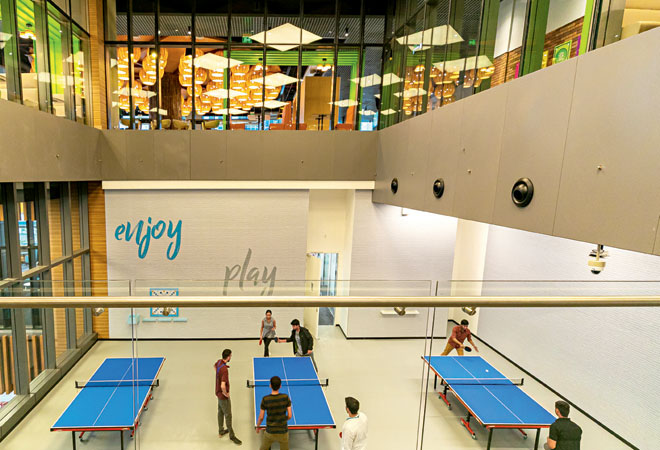 The Amazon campus in Hyderabad

Pranav Prashar, a former short service commissioned officer, had several brush-with-death experiences at the country's borders during his 10 years with the Army. Faced with unexpected challenges, he had to often take split-second decisions, with no room for complacency. On completion of his stint in the armed forces last year, at the peak of the Covid-19 pandemic, Prashar was hired by Amazon. As a soldier, he took innumerable risks to protect the country. In his new avatar as Operations Manager, Buyers Risk Prevention, he is in charge of protecting his consumers from fraud.

Prashar says the agility of the organisation and its ability to quickly embrace change and respond to challenges are similar to the training he got in armed forces. He is among the 100-odd army personnel that the ecommerce major has hired in the last one year. One of them is Major Aparna Gulati, who worked in the Army Service Forces for 12 years prior to joining Amazon last year. During her stint there, she was in charge of supply chain and transportation. "It was my duty to make sure that soldiers got their monthly ration within the defined timeline. The nature of my job at Amazon is similar," she says. Gulati is a Line Haul Manager in the Seller Flex Middle-Mile team and is responsible for planning and executing shipment pick-up operations.

The Covid-19 pandemic led to massive job losses in companies. Amazon India, on the contrary, went on a hiring spree. Not only did it honour all hiring commitments made the previous year, it also created over 70,000 seasonal positions across operations network and customer service. In September last year, it announced 1,00,000 seasonal positions ahead of the festive season. "The pandemic has reinforced the important role Amazon and ecommerce can play in job creation. We believe there is greater access to talent than before and it is a good opportunity to strengthen teams and nurture talent," says Deepti Varma, Director (HR), Amazon India.

Varma is excited about the leap-frogging of the company's diversity agenda in recent months. "When others were downsizing, we were hiring. We were able to hire a diverse talent pool. We were able to attract a lot of people who had taken a break and were looking at getting back, people with other skill sets, people with physical disabilities."

While the company already has two silent (manned by hearing and speech impaired employees) delivery stations in Mumbai, it is now looking at hiring people with different intellectual abilities. "We are trying to come up with pilots for people with other disabilities."

In the last one year, the company has hired a lot of transgenders in fulfilment and operational roles. The male-dominated Amazon fulfilment centres now have over 6,000 women employees as opposed to just 60-odd four years ago. The company has, in the past few years, been persistently trying to make its blue collared workforce diverse too. Jamuna Rani, owner of Sarini Associates, for instance, runs a women-only delivery station in Chennai.

The future of workplaces will clearly be hybrid. Organisations will ask employees to come to office on certain days of the week. However, a one-size-fits-all strategy will not work in an organisation such as Amazon, where people in fulfilment and delivery centres need to come to their workplace every day. It also has employees in studio business, technology, research, Alexa and Fire TV who perhaps can have a hybrid working arrangement.

Varma says it is not possible for a person to keep looking at the computer throughout the day. "Human interaction and coming to office have their own merit. At the same time, the evolving landscape requires us to be agile. We are reviewing our policies and processes to cater to gig workforce. We are also coming up with non-standardised employment modules," she says.

Though Amazon's hybrid strategy is still a work in progress, in the lockdown months, the tech-empowered company did what it knows best. It came up with tech solutions for moving seamlessly to the hybrid model. Many retail experts say the ecommerce giant's voice-enabled Alexa will transform retail businesses operate across the world. The Indian subsidiary has been using Alexa for people practices. The lockdown months led to the launch of Alexa Day-One Skill, which was used to onboard new employees. "Whenever a new hire joins, they will use Alexa to get answers to basic questions such as policies, benefits and so on. It's like a virtual assistant for us," says Varma.

Though 2020 was beyond doubt the most difficult year for businesses across the globe, Varma looks at it as a year filled with opportunities. "It helped us build resilience. The agility displayed by our teams was unparalleled. All this has helped us make a difference in life of our consumers."