News
Magazine
Industry
Are Export-Oriented Reforms Working? The Journey of an Export Consignment Gives the Answer

Are Export-Oriented Reforms Working? The Journey of an Export Consignment Gives the Answer

At container port JNPT, more than a thousand consignments arrive daily for shipping overseas. BT tracks the journey of one such consignment to see the impact of export-oriented reforms

It’s a muggy July evening in Ludhiana, a bustling town of over 1.6 million in Punjab that is renowned for its apparel production and exports. In the lush green premises of Eveline International on G.T. Road in the Dhandari Kalan area, a group of labourers huddle together, discussing the time and the right way to load the day’s consignment. Arun Salhotra, General Manager of the 70-year-old manufacturer of knitted apparels, says its 1,600 employees produce nearly 400,000 pieces of high-quality garment per month, which are exported to top American brands like Guess, Faherty and Nautica, the UK-based Burton of London, Spanish brand Massimo Dutti, French brand Armand Thiery, and several Indian brands as well. “We are witnessing growth in our exports and that is being reflected in our numbers, too. In FY22 we had turnover of Rs 150 crore, which was higher than Rs 140 crore in FY20,” says Salhotra. For perspective, ready-made garments comprised 36 per cent of India’s textile exports of $44 billion in FY22. At $16 billion, exports of such garments rose by 31 per cent year-on-year (YoY).

It’s July 15, 6 pm, and the labourers sweat and grunt as they load ready-made T-shirts on to a truck. The consignment is being dispatched to Guess and Faherty. As the labourers load the consignment, Pawan Sharma, Logistics Head at Eveline International, keeps a sharp watch, ensuring that everything goes all right. “Today, we are dispatching 7,500 pieces of ready-made garments. Tomorrow, another 12,000 pieces will be dispatched and on Sunday, another consignment with 9,000 pieces will be dispatched. So, this week is a bit hectic for us,” says Sharma, wiping a stream of sweat rolling down his forehead. 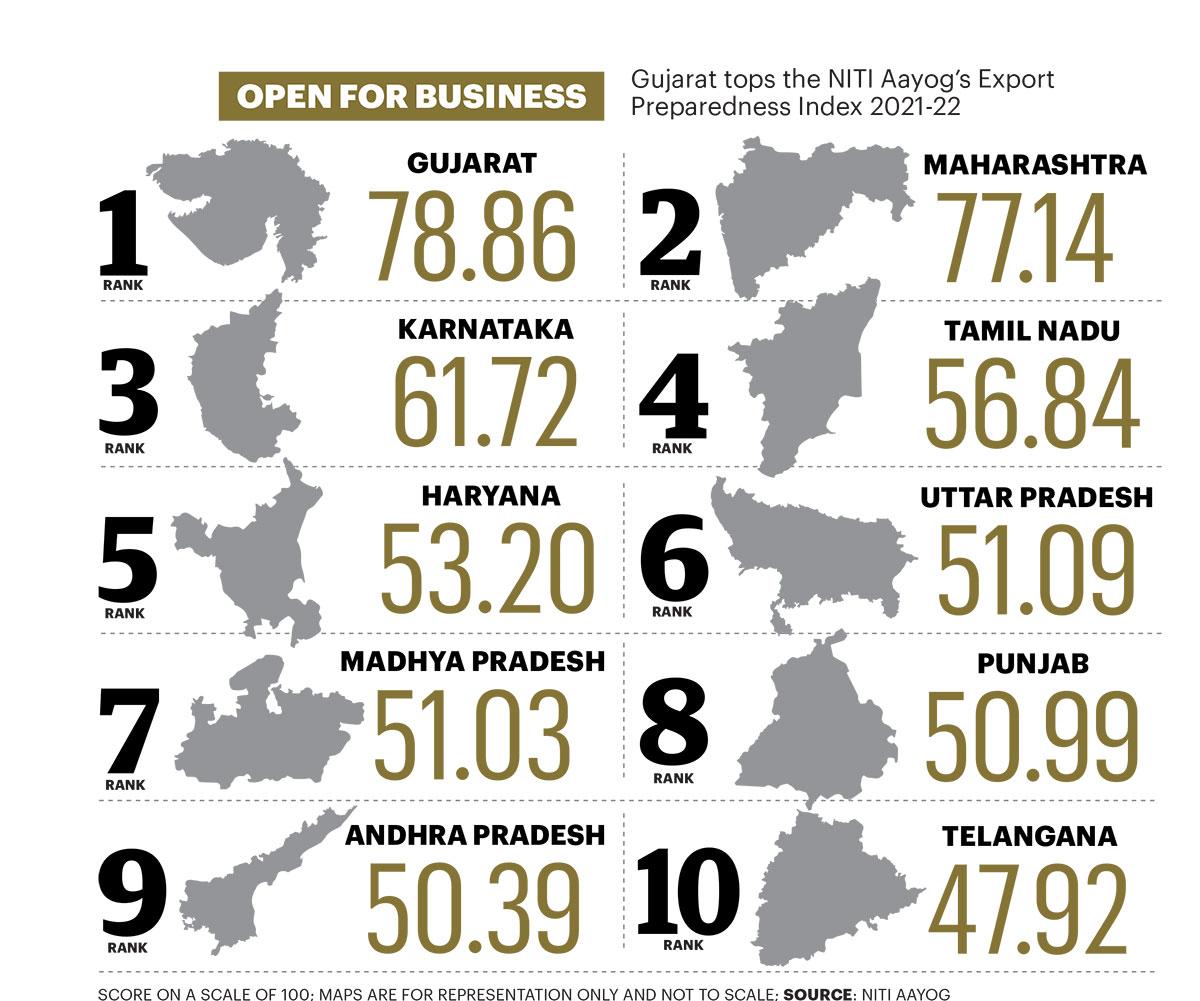 Assured of the pace of work, Sharma walks into his cabin. After reviewing the necessary documents, he brings Salhotra up to speed on the day’s consignment and the road map for its delivery to the buyer. Even as Sharma keeps an eye out on the loading process, constantly drawing the curtains back and forth to check progress through the window, he and Salhotra meticulously skim through the packing list and invoice, which are the key documents for exports initially.

On the documentation, Sharma and Salhotra agree that the process and formalities have improved a lot. Says Sharma: “Things have improved on many fronts. Earlier we had to send an agent to the Directorate General of Foreign Trade (DGFT) to get a licence for receiving ROSCTL [Rebate of State and Central Taxes and Levies]. After that we used to get a checklist, and then a scrip would be issued. But now, the scrip gets issued online the moment the shipping bill gets registered on the Indian Customs Electronic Gateway (ICEGATE), and the payment process starts. Also, on the documentation front, earlier we had to send all key documents like invoice, packing list, etc., with the consignment, which would take four to five days to reach the port. But now we directly email them to a customs house agent, which saves a lot of time and helps get customs clearances quickly,” says Sharma. 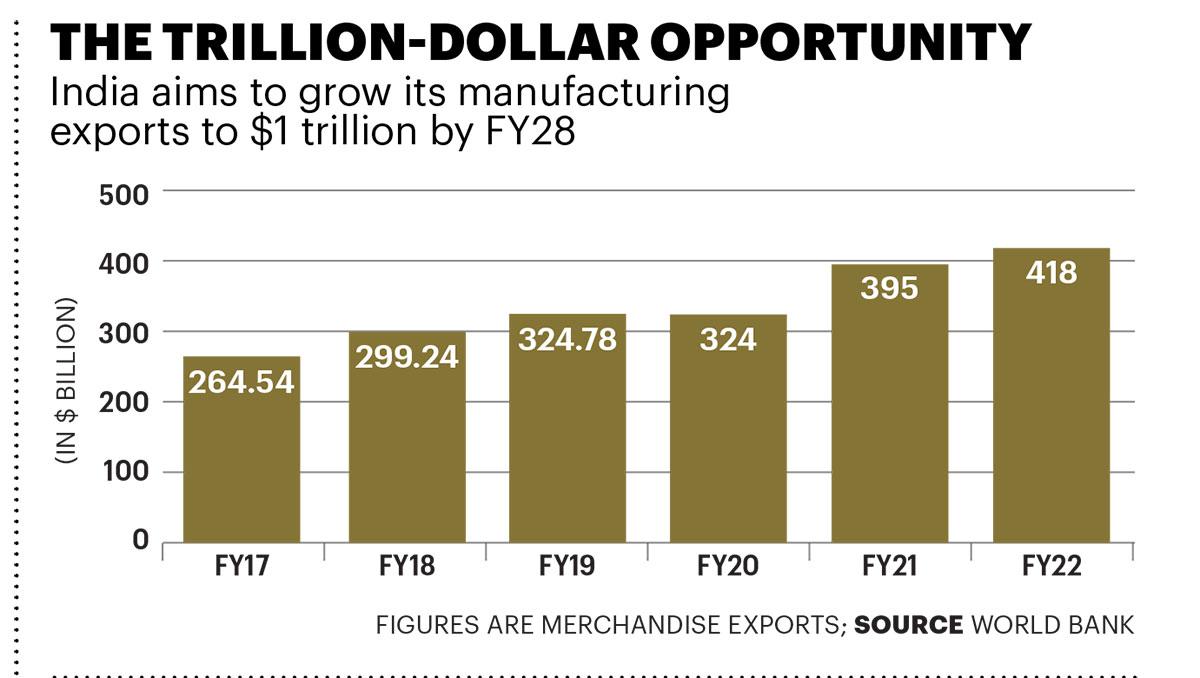 Salhotra adds that sometimes they face problems at the container freight station (CFS) level when its server is down, which leads to delays in refund of incentives, IGST (Integrated Goods and Services Tax) and drawback duty. “But that has also improved a lot, and the refunds come in on time,” he says. Another exporter, who wished to remain anonymous, says, “Many processes have been made transparent, such as Authorised Dealer Code, which is a 14-digit code given by the bank where the exporter maintains a business current account. Similarly, getting and changing Import Export Code has also become faster. Now we know how much time this process will take and the role of agents has become minimal. Earlier, the agent was our go-to person for everything.”

It’s 7:30 pm, and the work is on the brink of completion. As dusk arrives and temperatures start dipping, some workers start easing off and others strive to finish the job. The truck’s driver, Ramnaresh Yadav (name changed), 57, prepares to set off on the four-day, 1,710-km-long journey from Ludhiana to Jawaharlal Nehru Port in Nhava Sheva area of Navi Mumbai, rolling through Punjab, Haryana, Rajasthan, Gujarat and Maharashtra.

At 8 pm, Yadav honks the truck’s horn and two guards clad in blue-white uniforms rush to open the factory gate to let the consignment out. The journey begins. Salhotra and Sharma, drained by the effort, pack their bags to return home. “It was a long day,” says Sharma. 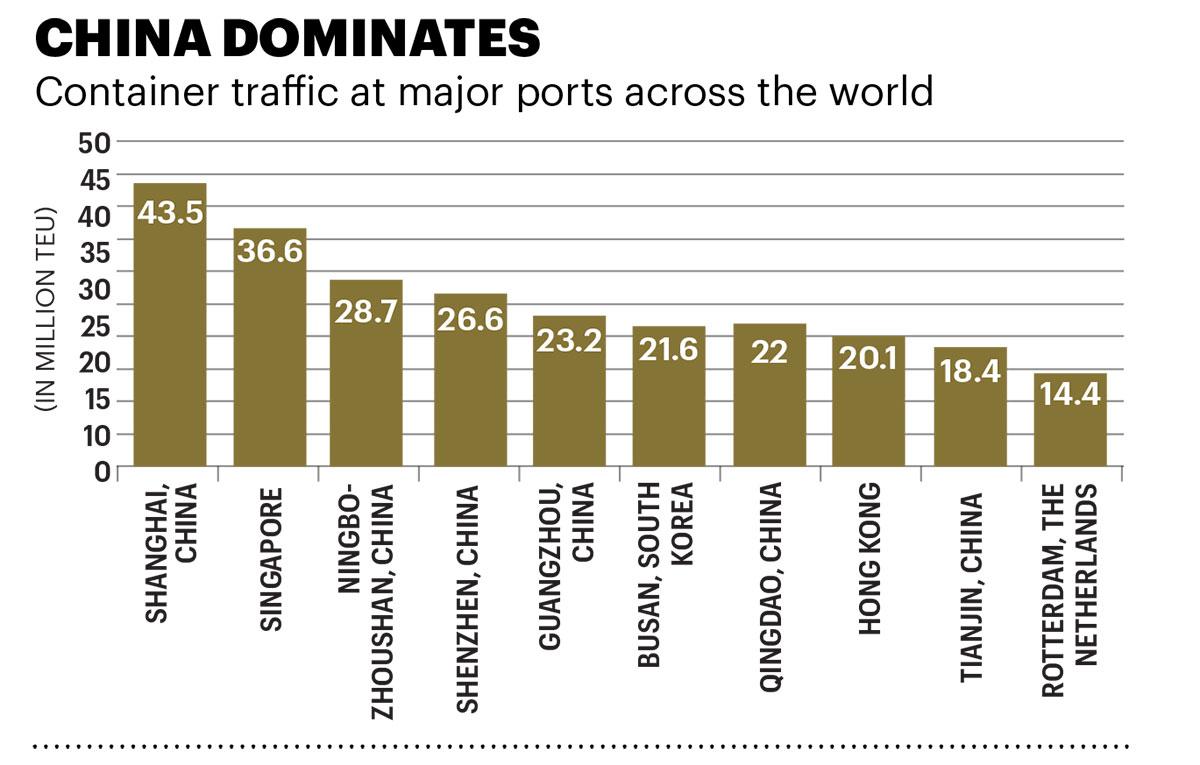 It’s July 18, 12 pm, three days since the consignment left Eveline’s factory. After driving 959 km from Ludhiana, the truck faces an unexpected bottleneck at Bagseen Toll Plaza in Sirohi district of Rajasthan. Thousands of farmers sit in protest on the highway to get compensation for their crops damaged by rain deficit and wild animals’ attacks. Keeping Eveline’s managers in the loop is driver Yadav, as he shares videos of the long jam and doubles that up with a WhatsApp voice message that goes thus: “Over 7,000 vehicles are stranded at the border. I am at Shri Ram Hotel waiting for the jam to be cleared, and there is no clarity as to when that will happen.”

Back in his cabin in Ludhiana, Sharma’s forehead creases in worry at the news. That’s because the cut-off date—the last date on which export cargo is received for a particular vessel—for the consignment is July 18. Missing the cut-off date would delay the delivery of the consignment. “Law and order is also a big challenge here in exports,” frets Salhotra. What happens if the cargo is unable to board its earmarked vessel? “In such situations, the client can ask us to send the consignment via aircraft, which is exponentially costlier for us as an exporter,” says Sharma. “If we send the consignment to the US via aircraft, we will incur a cost of over $550 per kg. But now we will explain the whole situation to the freight forwarder, and the buyer will authenticate the problem with the freight forwarder. If the buyer finds the situation authentic and genuine, he will give us relaxation to send the cargo in the next available vessel.”

July 19, 10:30 am. The deadline to meet the vessel is lost. After being stranded in Sirohi, Yadav informs Sharma that traffic has resumed on the route.

July 21, 10:30 am. After travelling another 830 km from Sirohi, Yadav and his truck finally reach Nhava Sheva port and enter the new central parking plaza (CPP) of JNPT port, which can accommodate 2,800 trucks. Jawaharlal Nehru Port Authority (JNPA) employees say the CPP has reduced the congestion around the port massively. But the challenge remains.

It is a lucky day for Yadav—he takes about 30 minutes to reach the designated CFS, which usually takes two to three hours because of the congestion. A customs broker says: “Paperwork and documentation have improved massively, but the major challenges now are day-to-day problems. Sometimes the ICEGATE portal is down. That leads to a delay in the generation of shipping bills.” The broker further adds that one of the biggest challenges is of congestion on the roads before the cargo reaches the CFS. “Yesterday, a shipment of 669 cartons came to me for a buyer in the US. The truck came to me at 9:30 am, but it took the trucker more than two hours to reach the CFS. On top of it, the particular CFS was full and there was no space for me to cart the cargo.” It was only around 4 pm that space for the cargo was found.

However, Sanjiv Sethi, Chairman of JNPT says, “JNPA and JNPT have the image of a congested port for the past three to four years. But a 45-km highway we completed this year has ended this congestion. Also, we at JNPT have created infrastructure to end congestion. The CPP for exports is one such example where the trucks wait under one roof. Earlier they would wait on the roads and that would lead to congestion.”

July 21, 1 pm. After obtaining the necessary approvals from the customs house agent, driver Yadav finally leaves the cargo at CFS Centre around the port. After physical examination by the customs authorities, the export order is issued.

But this particular consignment’s litany of woes continues. The sailing date of the re-designated vessel gets postponed to August 2 from July 25, as the vessel of the CMA CGM Company did not turn up on time. So, the cargo, with customs seal, lies in the shipping line’s custody.

While most documentary processes have been resolved by digital technologies, other challenges remain. For example, one issue that was triggered during the pandemic—container shortage—still persists. A port executive says that since the pandemic, countries are blocking empty containers resulting in the shortage: “We are witnessing a reduction in empty containers by 30 per cent, especially from China and the Gulf countries.”

Another challenge is the skyrocketing prices of shipping freight, which an export expert attributes as a reason for the lesser movement of containers. Eveline’s Salhotra says the sea freight price for the US has risen from $1,500 to $15,000 for a 40-ft container. For Canada, the freight charges have shot up from $1,300 to $11,000; and for France, from $1,300 to $10,000. In June, one consignment to France was delayed because of the container issue. Says Salhotra: “The vessel ceiling date was June 7 but because of non-availability of containers, it got delayed to June 21.”

One of the freight forwarders, who are nominated agents of the buyer, says that if there is a container shortage, the shipping line updates them. “We needed four to five containers on July 23 and the vessel was to sail on July 29. But the shipping line informed us that no container was available till July 28, so we went back to the buyer and held back the cargo,” he says.

Still, a start has been made.