For a lot of people visiting Bengaluru for leisure, the job is pretty cut out: Finding out the most happening brewpub in town for a taste of house specials. And if the brews aren't interesting enough, hit the next one which, going by the sheer numbers in the city, cannot be far away. Even for a nascent segment such as brewpubs - pubs which have in-house microdistilleries that brew fresh beer and serve it in the premises - you know how well the city has taken to it when you see a handful of them even in an area like Jayanagar, considered an old and conservative part of the city.

But not everything is right in the microbrewery universe. The growth of this niche segment - started in Pune in late 2000, it found home in Bengaluru and caught on well in cities as far Chandigarh, Gurugram and Hyderabad over the next few years - is under threat. Lakhs of litres of beer has had to be drained out as breweries have been shut for months. Even in places where they have opened after the lockdown, the seating capacity has been reduced due to social distancing norms, and there are few customers. This, even as fixed costs such as rentals and equipment maintenance remain high. For an estimated 250-275 players in the craft-beer segment, the next 10-12 months will be all about surviving the slump. 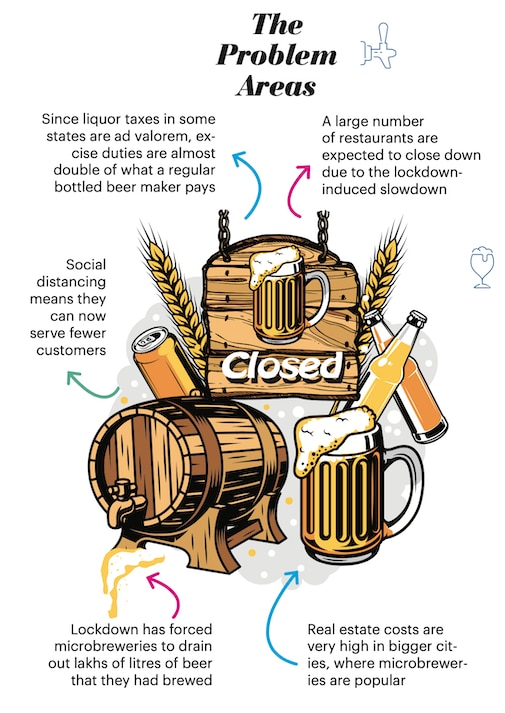 According to a Euromonitor International report of July 2019, the size of the beer market was 2.4 billion litres in 2018, expected to reach three billion litres in 2023, at 5 per cent compounded annual growth rate (CAGR). However, craft beer, being in the premium/niche segment, is relatively small. The India Craft Beer Market Report by GlobalData says the market was 43 million litres in 2019, up from 0.15 million litres in 2014. This is a staggering CAGR of 304 per cent. Microbreweries serve customers in-house as well as sell to other restaurants. In-house sales, in fact, are a small part of the craft-beer market.

Maharashtra is the worst Covid-hit state. Navin Mittal, Co-founder and Partner of Mumbai-based Gateway Brewing Company, says even before the government announced the lockdown, things were grim in early March, when people had started avoiding going to restaurants and a number of companies had asked employees to work from home. "Nobody knew how long this is going to last or what to anticipate. It was all about wait and watch," he says. With restaurants in Maharashtra shut for nearly three months now, he says: "We have probably drained out 50,000-100,000 litres of beer from our tanks that was consuming electricity and also probably losing freshness."

In Bengaluru, one of the early brewpubs, Toit, saw this coming and stopped production a few days before the lockdown. "We still have a lot of beer left," says Sibi Venkataraju, Co-founder, Toit Brewpub.

Unlike pure-play alcobev industry or bottled craft beer players, the business of microbreweries is similar to that of the restaurant industry. Microbreweries operate in the premium segment, have higher fixed costs as equipment takes a lot of space and also require more employees. In bigger cities like Mumbai and Delhi, where real estate is expensive, number of customers is an important factor driving profitability. The restriction on seating capacity has amplified the problem, says Sibi Venkataraju. 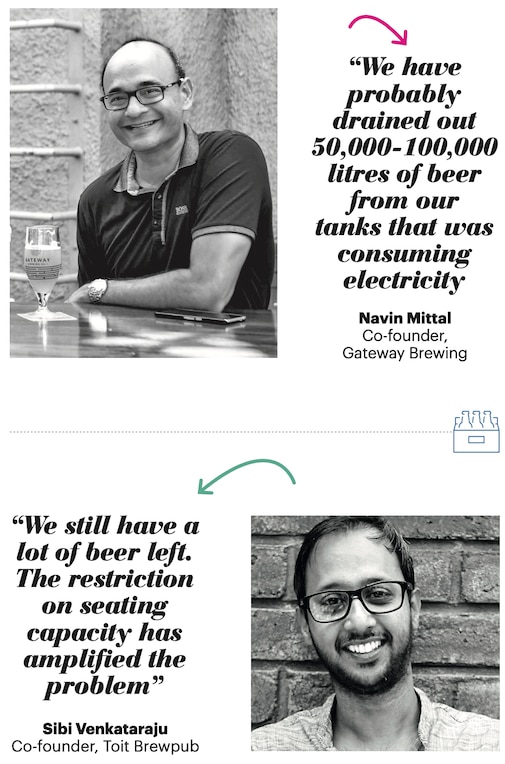 The cost of raw materials is Rs 25-30 per litre. With overheads, it escalates to around Rs 200, says Navin. With industry watchers anticipating shutdown of 35-40 per cent restaurants due to the pandemic, brewers fear loss of a large part of the keg business (sales to restaurants) in the short term. "If we assume that 40-50 per cent of the restaurants will not open immediately, the number of places we serve will almost halve. The reality is that in India, given the economy and the cost consciousness, we don't think consumption will hit even 50 per cent of earlier levels," he says. With a fall in the number of restaurants and consumption, especially in Maharashtra, where Gateway operates, Navin sees around 25 per cent of earlier volumes coming back.

Microbrewers are also facing challenges from the excise department. Even when alcohol sales were allowed, except Karnataka, no other state allowed microbreweries to sell existing stocks as takeaways. White Rhino Brewing Company Founder Ishaan Puri says as liquor taxes in states such as Maharashtra, Delhi and Karnataka are ad valorem (on value of sales), their excise payments are almost double of what regular large bottled beer makers pay. "We have a considerable excise payment obligation as in several states. The taxes have to be paid upfront before stocks are brought inside," he says. As cash-strapped state governments increase taxes on alcohol, microbrewers are also paying for renewal of excise licences for which the excise department has not provided any concession or extension. Ishaan says working capital costs have increased sharply, revenues are zero, but they are still bearing costs such as rents and salaries.

A Goldstein Market Intelligence report says India's beer market will reach $23.5 billion by 2024 by growing at 10.9 per cent CAGR. But microbreweries will have to endure a lot of pain in the short term.

No microbrewery owner is expecting a huge uptick in demand even after the lockdown is lifted completely. Most have resigned themselves to the fact that some "normalcy" will return in urban areas and tourist hotspots such as Goa only in 2021. The challenge till then will be managing costs and redistribution of stocks in the various supply channels.

"After cutting all possible costs, we are looking at operating at a break-even point," says Navin. His business is fairly small and used to report sales of around 15,000 litres a month before the pandemic. With existing money, even if it can operate at a break-even number in the coming months, it will be a job well done, he says.

Even in cases where stocks are flying off the shelf at stores - for instance, says Ishaan, there is no White Rhino stock in Bengaluru - it's all about doing prudent business. With a 70:30 bottling to keg ratio, "we are not going to look at new markets we had planned for the year (Goa) and focus on the existing business," says Ishaan, who largely operates in North Indian markets such as Delhi, Gurugram, Punjab and Chandigarh. The company is chalking out future plans with revised targets and will look at further expansion only after the market recovers.

Brewers who operate in bottled segment and also sell in-house seem to be better insulated than the rest of the players. Javed Murad, Founder of White Owl Brewery, which moved out from keg sales in Mumbai and Pune to 100 per cent bottling, says: "Typically, keg sales tend to be 30-40 per cent of sales depending on the brands. This channel is now compromised on account of the pandemic."

The economic downturn may make people more hesitant in ordering beer at a restaurant given the mark-up in prices compared to buying from a retail store, he says. "In the absence of a vaccine, I'm unsure if restaurants and bars will be able to function in even a remotely similar manner to the way they were running before the pandemic," says Javed. For White Owl, bars account for 40 per cent sales, with the rest coming from retail stores.

While Karnataka is looking to allow breweries to operate only as takeaways and also giving permission to microbreweries to restart a fresh production batch, the microbrewery players are demanding a more friendly policy that will allow them to resume operations instead of treating the alcobev industry as a cash cow.