Home Is Where the Money Is

Residential home sales have bounced back strongly due to the new normal of work from home and online education. However, builders have to contend with the changing needs and even demographics of the customer

The relevance of these three words has changed during the past year and a half. The office, schools, and even catching up with friends and family have moved indoors, thanks to the pandemic. Of course, some companies are gradually bringing employees back to the office and many states are considering reopening, or have already reopened schools, but we are still a long way from a return to pre-Covid normalcy.

With our world confined to four walls, the importance and luxury of owning a house have increased manifold. And that, in turn, has drastically transformed the residential real estate market in India. Not only have sales picked up in the past three to four quarters after a prolonged lull, developers are gearing up with a slew of new launches keeping in mind the changing needs and preferences of the customer.

The most obvious of these is the need for bigger houses that include a home office, open spaces such as decks and gardens, as well as multifunctional spaces. “We are working on open-plan living to improve the physical and mental health of our buyers as they spend more time at home working, studying, in recreation, etc.,” says Kamal Khetan, Chairman and Managing Director of Mumbai-based Sunteck Realty.

This means a preference not just for houses in low-density areas, but also bigger houses. For instance, in Bengaluru, where buyers are mainly IT sector professionals, “There is a desire for larger homes with an average increase of around 150-200 sq. ft, with an additional room for working from home,” says Rajendra Joshi, CEO of residential sales at Bengaluru-based Brigade Enterprises.

But perhaps the biggest shift is in how investors perceive the real estate market. Investor confidence in real estate shot up to 54 per cent during the second wave from 48 per cent in the first wave, according to a recent survey by ANAROCK Property Consultants and industry body CII. Critically, 48 per cent of millennials, among the nearly 5,000 participants, said buying a house was now a priority. Real estate is no longer a speculative purchase, as it was a few years ago, especially in the Mumbai Metropolitan Region (MMR) and National Capital Region (NCR). Now, nearly 71 per cent are looking to buy a house they can stay in, while only 29 per cent are considering it as an investment, the survey showed. 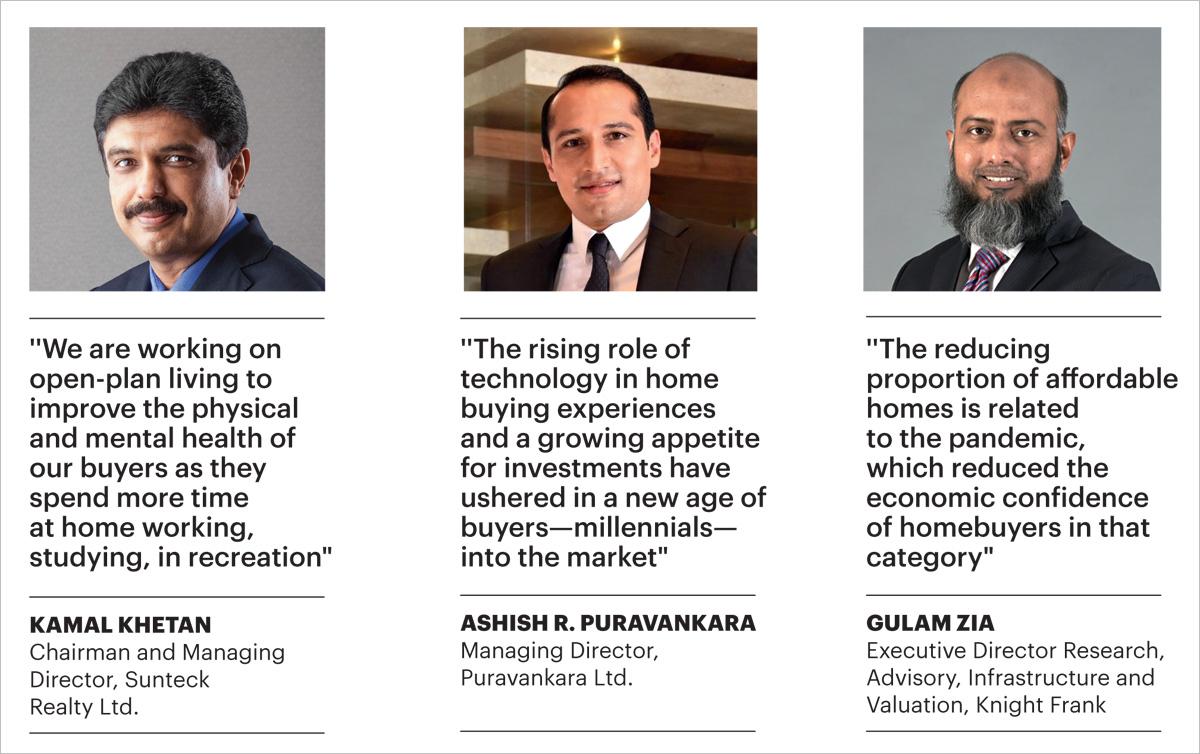 With the second wave receding and the pace of vaccinations picking up, residential activity is also gaining momentum as genuine buyers return, according to Anuj Puri, Chairman, ANAROCK. “The ongoing trend of sales exceeding supply is likely to continue. This year is expected to witness an increase of 35 per cent in launches and a 30 per cent increase in sales over 2020,” he says, identifying MMR and Bengaluru as the top markets.

In fact, sales have already been stellar, especially across key residential markets such as Hyderabad, Delhi, Mumbai, Bengaluru, Pune and Chennai. There were 99,416 units sold in the first six months of 2021, which is 67 per cent higher than the 59,538 units sold in the same period last year, according to a report by real estate consultancy Knight Frank.

Brigade sold around 0.75 million sq. ft of new bookings, valued at Rs 470 crore, in the first quarter of FY22, which was an increase of 91 per cent by area and 111 per cent by value over the first quarter of FY21. Meanwhile, Bengaluru-based Puravankara Ltd reported a 26 per cent overall rise in sales realisation in the first quarter. “Our sales figures have risen to Rs 2,202 crore in 2021 as opposed to Rs 1,714 crore in 2020. These figures are a strong indicator of pent-up demand in the residential segment,” says Managing Director Ashish R. Puravankara.

However, more than the sales, the interesting factor is the type of houses in demand. Developers and builders are now seeing a renewed interest in the mid-range and luxury market segments. For instance, Bengaluru–based Prestige Group’s premium projects, including Prestige Waterford in Whitefield, reported sales of 500 units in the first 12 months of their launch. Their villa projects are close to being sold out. The Prestige Golfshire ultra-luxury golf villa project in north Bengaluru sold more than 50 villas last year, according to the company . While luxury houses—typically north of Rs 1.5 crore—may yet be out of reach for many, there is certainly a willingness to step into premium homes, which cost between Rs 70 lakh and Rs 1.5 crore. Of the approximately 36,260 units launched across the top seven cities in the second quarter of 2021, about 13,130 were premium units, according to ANAROCK. The roughly 36 per cent share of these premium units was the highest among all segments, followed closely by the mid-priced segment, with a 32 per cent share. No surprise then that these two segments—which together straddle a price range of Rs 40 lakh to Rs 1.5 crore—are likely to dominate new launches, says Puri.

The biggest reason for the rise in demand in the mid-range and luxury markets is Covid-induced lifestyle changes, such as work from home and online schooling. “We are witnessing an increasing demand for our luxury and premium projects, with continued momentum in our mid-income and affordable portfolios,” says Prashant Bindal, Chief Sales Officer at Mumbaibased Lodha Group.

This has resulted in the share of sales of affordable or entry-level homes— priced at Rs 50 lakh or less — dropping to 42 per cent of overall sales in the January-June period this year from 47 per cent in the corresponding period last year, says Knight Frank research. The reason is not so much people upgrading as much as it is due to people constrained by their circumstances.

“The reducing proportion of affordable homes is related to the challenges thrown up by the pandemic, which reduced the economic confidence of homebuyers in that category due to the threat of job losses, reduced income, inching inflation and other challenges,” says Gulam Zia, Executive Director -Research, Advisory, Infrastructure and Valuation, Knight Frank.

However, by no means is that indicative of a lack of interest in affordable housing. In fact, Praveer Shrivastava, Head of Residential sales at Prestige, has the opposite story to tell. “In Bengaluru, entry-level projects such as Prestige Finsbury Park have sold 1,500 units in a year and a half; another sub-Rs 50 lakh product Prestige Primrose Hills in south Bengaluru is also doing well,” he says. Similarly, Provident Housing Limited, Puravankara’s affordable offering, has four new projects across Bengaluru, Pune, Mumbai and Coimbatore, totalling around 7 million sq. ft, planned for the coming year.

The optimism in the residential segment is reflected in the pipeline of launches. And sales. For instance, Prestige launched two projects in the past six months that, it said, were sold out within days of their launch. It has a strong pipeline of upcoming projects in Bengaluru, Hyderabad and Chennai. The Lodha Group has signed four joint ventures as part of its ambition to foray into Pune as well as the eastern and western suburbs of Mumbai.

Lodha’s choice of cities is not a coincidence. Home sales in Mumbai and Pune have been quite strong since the beginning of this year, buoyed by a policy impetus. Last September, the Maharashtra government slashed the stamp duty on property registration from 5 per cent to 2 per cent until December 31, 2020, and raised it slightly to 3 per cent from January through March this year. “The Mumbai and Pune markets were given their orbital velocity by the Maharashtra government’s decision,” says Knight Frank’s Zia. Even Karnataka said in its latest budget that it would reduce the stamp duty for flats valued between Rs 35 lakh and Rs 45 lakh. While that bill is still pending approval, such measures have revived consumer interest. As have some measures taken by the Central government.

The government has been pushing affordable housing through several initiatives, including the Special Window for Affordable and Mid-Income Housing. It has also taken steps to protect the interests of homebuyers, such as establishing the Real Estate Regulatory Authority (RERA) Act. Even the judiciary is coming down heavily on developers for flouting norms. Take, for instance, the recent case of Supertech in which the Supreme Court ordered that all unauthorised floors be demolished. However, the steps have been largely aimed at addressing the liquidity concerns. At some point, say experts, the rising cost of inputs such as steel and cement will shift to the buyer. They believe that further concessions such as sales tax exemptions, higher income tax benefits and a nationwide cut in stamp duties will propel sales. In the wake of these developments, say experts, buyers would prefer reputed builders with a strong track record, which would mean greater security on their clearances and disclosures to home buyers.

BANG FOR THE BUCK

Already, buyers are not just seeking value for money through bigger homes in more convenient locations, but also through the design and convenience on offer. Whether simply due to the pandemic or not, this has forced developers to acknowledge the need for innovation in construction technologies and to rethink their design structures.

These new-age concepts have led to a new demographic for developers to target. “The rising role of technology in home buying experiences and a growing appetite for investments have ushered in a new age of buyers— millennials—into the market. As a developer, it is exciting to see the increased demographic diversity in our customer profiles,” says Ashish R. Puravankara.

And developers are looking to hook this tech-savvy generation with their own poison—technology. For instance, Embassy plans to launch the second phase of its Embassy Edge@ Embassy Springs this fiscal year with India’s first Alexa-enabled smart homes, specifically targeting the millennial home buyer.
The other big emerging demographic in the past few quarters has been women, with developers acknowledging the influence they have in a family’s decision-making process, particularly in the modern age. “Financial independence has become crucial for the present-day woman. That has significantly raised their preference for real estate and we have begun treating our consumers as ‘she’,” says Lodha Group’s Bindal.

Whether it be the buyer’s changing tastes and preferences, or the transforming profile of the buyer herself, developers have to put on their strategic thinking caps. ANAROCK’s Puri says developers will face challenges in catering to various demands such as building bigger houses but keeping the overall ticket price under check. It is paramount, he adds, that they focus on completing their existing and delayed projects to restore confidence among potential buyers. After all, the pandemic has presented them with a godsend— ready, willing and able buyers, longing to say those three words…