How the 5 Cs Have Hit the Auto Components Industry

Coronavirus, chip shortages, container costs, commodity prices and now the conflict in Ukraine: auto ancillary makers blame the 5Cs for the ongoing slump in the industry

As brent crude oil trades around $110 a barrel and essential commodities such as steel see a jump of almost Rs 10,000 a tonne, India’s $57-billion auto components industry continues to bear the impact of the ongoing Russia-Ukraine conflict and its aftershocks. The industry, which comprises over 600 large and medium-sized manufacturers, says that the 5Cs—coronavirus, chip shortages, container costs, commodity prices and the conflict—are responsible for taking it at least three years back in time.

Why the conflict? Russia happens to be one of the world’s biggest producers of palladium, which is used to build memory and sensor chips. And Ukraine exports neon gas, which is used for making chips by etching circuit designs into silicon wafers. “It has accentuated the risk associated with doing business. Even pre-Covid-19, the auto industry was on a downside for almost two years. One of the biggest challenges is that if one of the supply chain partners is not able to perform, our working capital gets blocked. [But] we’re kind of hedged because we’re present in multiple segments,” says Deepak Jain, Chairman and Managing Director of Lumax Industries, the country’s market leader in automobile lighting systems and solutions. While the supply-side issues continue, the recent increases in fuel prices have hurt the demand for entry-level models, especially in the two-wheeler segment, due to higher running cost. Despite ongoing challenges, Jain wants to focus on the bright side. Now that entry-level segments are suffering, he is looking to diversify into a new product portfolio with a focus on premium segments. “I’m optimistic we’ll have double-digit growth and things are expected to ease off in the next fiscal. We are looking at new segment penetration opportunities with electric vehicles (EVs), automatic transmission, light weighting, LED penetration becoming the norm,” he says.

Industry body ACMA (Automotive Component Manufacturers Association of India) says it’s a question of viability and not just prices. “The war is into several weeks and increase in prices of commodities like steel, which makes up 60-70 per cent of the total raw material that we consume, will definitely impact the profitability of the industry and the viability of the smaller players. Smaller companies will not be able to stock up as much as the bigger ones. It’s a concern for the entire industry,” says Vinnie Mehta, Director General of ACMA. 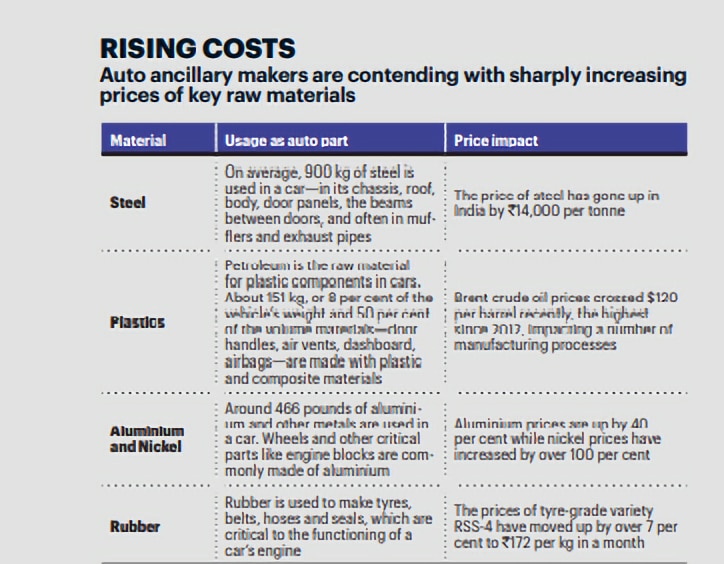 Just when the sector was on the cusp of recovery from the pandemic, auto component makers say the conflict has slowed the process further. “Every company will have a different way of dealing with the crisis. You’ll have to be very nimble in negotiating with suppliers. The entire supply chain will have to be resistant according to the changing times and schedules,” says Mehta.

Mehta is right. Every company is looking to come out of the crisis in its own manner. Minda Corporation, for example, is focussing hard on strengthening relationships with global chip suppliers and distributors to improve allocations. “We are working to have a robust inventory management system. For semiconductor chips, schedule/forecasts are released to our distributors/suppliers for 12-15 months. Wherever required, non-cancellable and non-revocable orders are also released,” says N.K. Modi, Executive Director of Minda Corporation. The $445-million group is known for manufacturing electronic and mechanical security systems, telematics, wiring harnesses, sensors, etc. Modi says the company is facing certain supply chain and logistical challenges right now, particularly while importing parts other than electronics. “Keeping those in mind, we are placing orders with suppliers for N+4 months, and have also increased the inventory levels. These are all business decisions taken to ensure and meet OEM customer needs. To further improve coordination and management, tripartite meetings are held with our suppliers and customers from time to time, which has certainly helped,” he adds.

Steel and aluminium prices have already increased by more than 15 per cent and 34 per cent, respectively, and Brent crude, upwards of 32 per cent. This, the industry feels, will also hit the consumer through increase in prices of vehicles. “How long can you sustain when input prices are so high? Managing supply chain becomes unviable if it’s not passed on to the consumer. It could have a detrimental impact on the demand, and that’s definitely a concern,” says Mehta. Globally, several big auto manufacturers such as Mercedes-Benz have already started announcing price hikes. Toyota, for example, has said it will scale down production by about 20 per cent due to shortage of semiconductor chips, while by the end of the third quarter of 2021-22, Maruti Suzuki had more than 240,000 pending customer orders that it is unable to fulfil due to the shortages.

Auto ancillary companies that are into electric vehicles and battery manufacturing are among the worst hit. Venkat Rajaraman, Founder and CEO of lithium-ion battery pack maker Cygni Energy, says many OEMs have slowed production, and the delays have gone as high as eight to 12 months. “The big impact we are seeing is in semiconductor chip manufacturing, because Russia and Ukraine are key producers for some of the raw materials needed, and we do see that impact already. All the metal prices have gone up and we definitely expect short-term volatility. We see a clear supply-chain issue due to this ongoing crisis,” he says.

Delhi-based Trontek is one of the largest importers of lithium-ion batteries in India for manufacturing its electric two- and three-wheelers. “Global OEMs from Europe and the US most likely use China for bulk orders, as China is among the five top countries with the most lithium resources. And India is still at the nascent stage and a developing market for EVs, therefore the share of Indian battery players with regard to the overall global ecosystem is quite low. The Indian players have less purchasing leverages as the major share of the supplies goes to Europe and the US,” says Samrath Kochar, Founder and CEO of Trontek. He expects the increase in cost of batteries to reflect in the cost of manufacturing EVs by May. Given that the battery is the most expensive component, all the OEMs will be forced to pass on the prices to consumers.

Rajaraman adds that India has an opportunity to lead the EV transition because India is a big market and also has top software talent. “Electric vehicles are going to be very heavily software-enabled, IoT-enabled and connectivity-enabled. We may be importing lithium-ion cells for some time from China and other countries, but India can lead the software aspect of it, which can help in terms of manufacturing capability,” he says.

Auto parts makers say the only way to strengthen their supply chains after battling the 5Cs is localisation. “The auto components industry has been battered by the 5Cs. We’ll have to invest in our competencies and ensure that we become more self-reliant and robust. There are challenges, but there are opportunities as well. The industry is likely to see more collaboration, more tech absorption, and more agility and speed to transform itself, and that’s the way towards its long-term sustenance,” says Jain.