Resilience at It's Best

Over the last year, Indian IT companies have struck some of their biggest deals ever, and have stayed resilient amid testing circumstances

It was probably the most traumatic year for the company, because we had grown in size," Kris Gopalakrishnan, Chairman, Itihaasa Research and Digital and Co-founder, Infosys, spoke about the global financial crisis that broke out soon after he took over as Infosys' CEO in 2007, in a video posted on Itihaasa. "Everything was going fine and that year we grew by about 35 per cent. Then, suddenly the world around us collapsed. In the following two fiscals, Infosys grew at 11 per cent (FY09) and 3 per cent (FY10). After three years of slow growth, the company recovered in FY11 with 26 per cent annual revenue growth."

Little did Gopalakrishnan or anyone think that almost a decade later, another crisis would emerge, of a completely different nature and magnitude. While the global financial crisis of 2008/09 was faced with a demand challenge, the 2020 pandemic posed both demand and supply side hiccups. Only, this time IT services companies successfully converted the crisis into an opportunity. 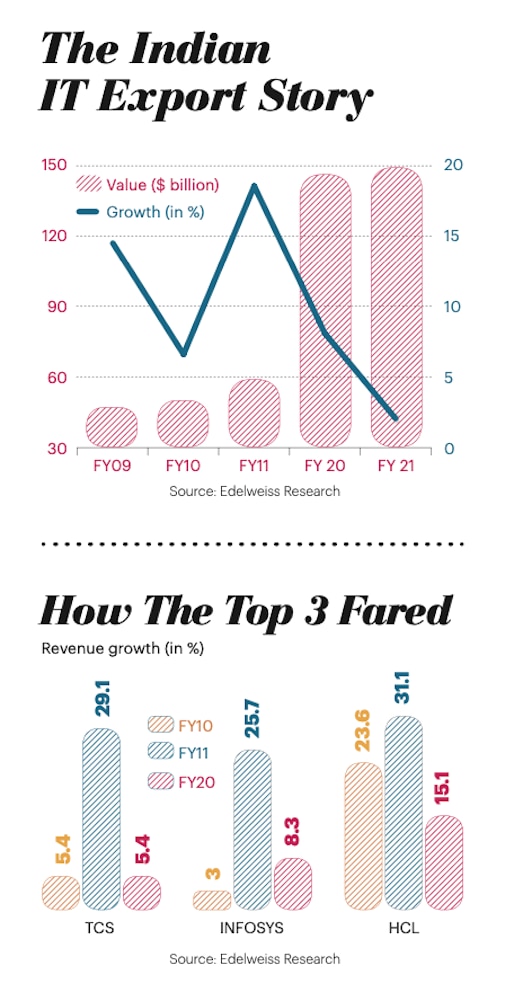 The 2008/09 financial crisis had its roots in the US, but ramifications were felt across the globe. India's largest IT services companies saw their discretionary spends go down. Recalls Krishnakumar Natarajan, former Chairman and Co-founder of Mindtree, "Technology then was more a discretionary expense, so people immediately reduced spending in the area." And when customers panicked, companies did too. Budgets were trimmed, teams were laid off and cost control became a necessity. "If you just look at Indian technology companies, trying to keep costs under control was never a factor during the dotcom boom. But after the global financial crisis, it became important," adds Natarajan. Companies went frugal post the 2008 crisis. In fact, India's largest IT services company Tata Consultancy Services managed costs through offshoring and headcount management to protect margins. In 2009, IT industry body NASSCOM revised the software and services exports growth to 16-17 per cent for 2008/09 to $47 billion, lower than the estimated $50 billion, due to the global economic slowdown and lower demand. It took 8-10 quarters for companies to recover with most getting back to pre-crisis levels only by FY11. The Covid uncertainty, on the other hand, has been transient. For instance, at the beginning of FY21 TCS had indicated that the impact of Covid on revenues would be comparable to the global financial crisis. However, since then, in the company's Q3 earnings call, Rajesh Gopinathan, Managing Director and CEO, said, "We are now confident about the year ahead, we are very confident we should be able to get back to double-digit growth."

Taking the Covid crisis head on, IT firms set up 'War Rooms' to coordinate between clients, employees and local authorities, while shifting to the work-from -home (WFH) mode early on and showing flexibility in addressing sensitive clients by being open and empathetic, a NASSCOM study has said. According to industry estimates, consolidated revenues of top-listed technology companies grew 5.3 per cent in H2 2020 over H1, while revenue per employee increased 5.5 per cent. 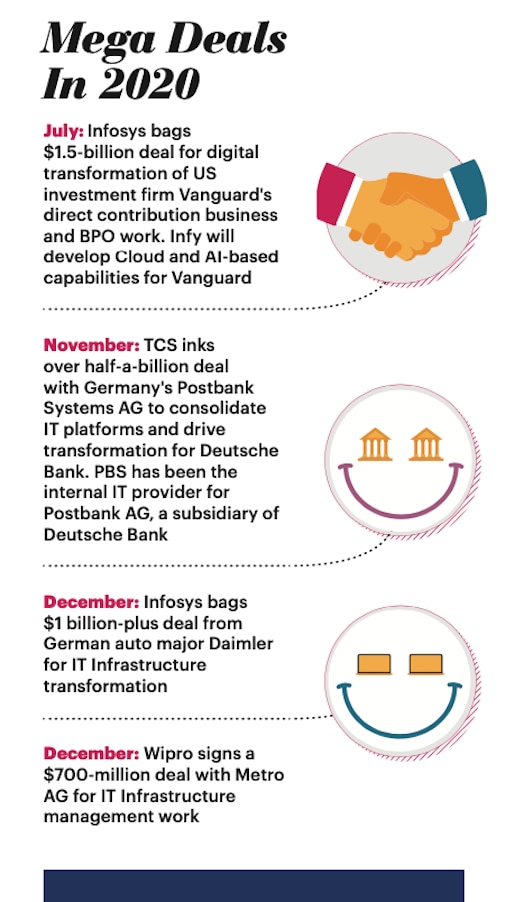 Companies such as Infosys, TCS and Wipro, among others, embarked on a massive reskilling drive to equip their workforce for a post-pandemic world. TCS, for instance, trained 366,000 employees in new technologies, and over 444,000 in Agile methodologies (software development methodologies centered round the idea of requirements and solutions evolving through collaboration between cross-functional teams) by January 2021. The company conducted around 11,000 courses in nearly 2,400 competencies, with 1,600-plus courses in areas such as Artificial Intelligence (AI), cyber security and Blockchain. It recorded four million-plus learning days in FY20 at an average of 9.4 per employee. As many as 365,000 employees added 3 million-plus learning hours with the company's #Learn in Lockdown initiative.

Companies did not hit the panic button this time, instead, "They invested in online training to reskill employees on digital skills to prepare for expansion once the crisis ends," says Sharath Srinivasamurthy, Research Director, Enterprise Solutions and ICT Practices, IDC India.

Alongside investing in large-scale reskilling of existing employees on digital technologies and hiring new talent from market, companies developed solutions/IPs, set up innovation labs and executed multiple acquisitions. In September 2020, HCL technologies acquired Australian consulting firm DWS for $158 million to bolster its digital capabilities in Australia and New Zealand. Next month, Infosys completed the acquisition of Kaleidoscope, a product design, development and insights firm for $42 million and Czech-based GuideVision for nearly 30 million euros. Its $1.5-billion deal for digital transformation of US investment firm Vanguard's direct contribution (DC) business and BPO work in July, has been one of its biggest so far. In November, TCS inked over half-a-billion deal with Postbank Systems AG to consolidate IT platforms and drive transformation for Deutsche Bank. Wipro went firing on all cylinders under new CEO Thierry Delaporte, acquiring Encore Theme Technologies, Eximius Design and 4C last year.

Digital revenues at $50-53 billion form nearly a third of IT companies' revenues, growing at five times the overall services growth rate. According to IDC, despite a global pandemic, direct digital transformation investment is growing at a CAGR of 15.5 per cent since 2020 and is expected to approach $6.8 trillion by 2023 as companies build on existing strategies and investments, becoming digital-at-scale future enterprises. An analyst with a leading brokerage in Mumbai points out that with technology moving out of the discretionary bucket to a necessary spend and being a part of Boardroom discussions, the recovery has been far quicker than global financial crisis. "With scale, agility and ability to adapt to situations have given clients higher confidence than ever before," he adds. At the country's second-largest IT firm Infosys, digital contributed 50 per cent to the company's overall revenues in Q3 FY21, against 47.3 per cent in Q2 and 44.5 per cent in Q1.

Last year saw a greater shift (10 per cent) to outcome-based pricing, compared to 2019, while offshoring also increased 4 per cent. "Irrespective of location, we have been able to deliver during the pandemic without a drop in productivity or compromising on quality, which has given confidence to clients," Infosys' Chief Operating Officer and NASSCOM Chairman U.B. Pravin Rao said at briefing of NASSCOM's strategic review report held in February .

IT companies ensured that communication channels with clients were always open. The result: 2020 not just brought in new large deals, but also a healthy renewal rate for most companies. With early negotiations on deal terms, "Indian IT companies demonstrated empathy and flexibility and kept the contract in the drawer. Certain IT companies also provided time-critical services and advisory as goodwill, in turn strengthening client relationships," says IDC's Srinivasamurthy.

For the past three quarters, Infosys' total contract value has been about $12 billion, with the net new portion at $8 billion. "From that perspective, in the past nine months we have seen a significant percentage of our revenues coming from net new, which gave us good comfort on growth momentum in the coming few quarters," Infosys' Rao had said during the company's earnings call .

A significant portion of Wipro's 12 large and small deals with more than a total contract value or TCV (the worth of a contract after it has been executed) of $30 million each in Q3 FY21 came from new deals; the combined TCV of these deals was over $1.2 billion, the company said in its third-quarter results statement. Even in traditional services like infrastructure management for instance, companies such as HCL Technologies have seen good renewals. "Last quarter, many mega deals that we have with big large accounts were renewed exceptionally well. I wouldn't say that competition in renewals is moderating. I see, not only global players, but even Indian players getting quite aggressive," said C. Vijayakumar, President and CEO, HCL Tech, during the companys last earnings call. The company crossed $10 billion in annualised revenue run rate last quarter.

"Indian IT providers managed to navigate through many different types of crises in the past, but this time I see many providers leverage the challenge and trying to convert it into an opportunity," says D.D. Mishra, Senior Research Director at Gartner. With many of them managing to grow Cloud adoption and digitalisation, enabling remote working and benefits of vendor consolidation clearly helped the scale tip in their favour, turning the Covid crisis into an opportunity.