Why India Still Rules IT Outsourcing and How to Sustain It

Despite emerging competition from Eastern Europe, Latin America and the rest of the Asia-Pacific region, India is still the go-to destination for IT outsourcing. Continuous skilling in niche areas can help keep the crown shiny.

Infosys Chief Operating Officer U.B. Pravin Rao is retiring on a baffled note, it seems. “This is a very unusual phenomenon… [I have been] in the industry for over 35 years, I cannot yet think of a time when we have seen this kind of thing,” he said at the company’s second-quarter earnings call in October this year.

The ‘thing’ he’s referring to is the mad rush for IT talent in the country brought on by pandemic-led digital transformation initiatives in almost every company. The ‘thing’ has forced firms and their HR heads to grin and bear it as highly skilled technology professionals walk out on job offers with 50 per cent salary hikes in some cases, with three-four other offers lined up. The ‘thing’ prompted the likes of Bhavish Aggarwal, Founder and CEO, Ola, to wonder aloud on Twitter if it just may be cheaper to hire from Silicon Valley instead.

Well, not quite. Let alone Bay Area, it turns out there simply isn’t another IT outsourcing hub like India for companies looking to execute large-scale projects. The reason: A formidable triad of cost advantage, a 4.5-million-strong English-speaking talent base and high skill competencies built over a quarter of a century. Since management consultancy Kearney began measuring the attractiveness of countries for IT offshoring in 2004, India has topped its Global Services Location Index all the way through to its latest edition in 2021. 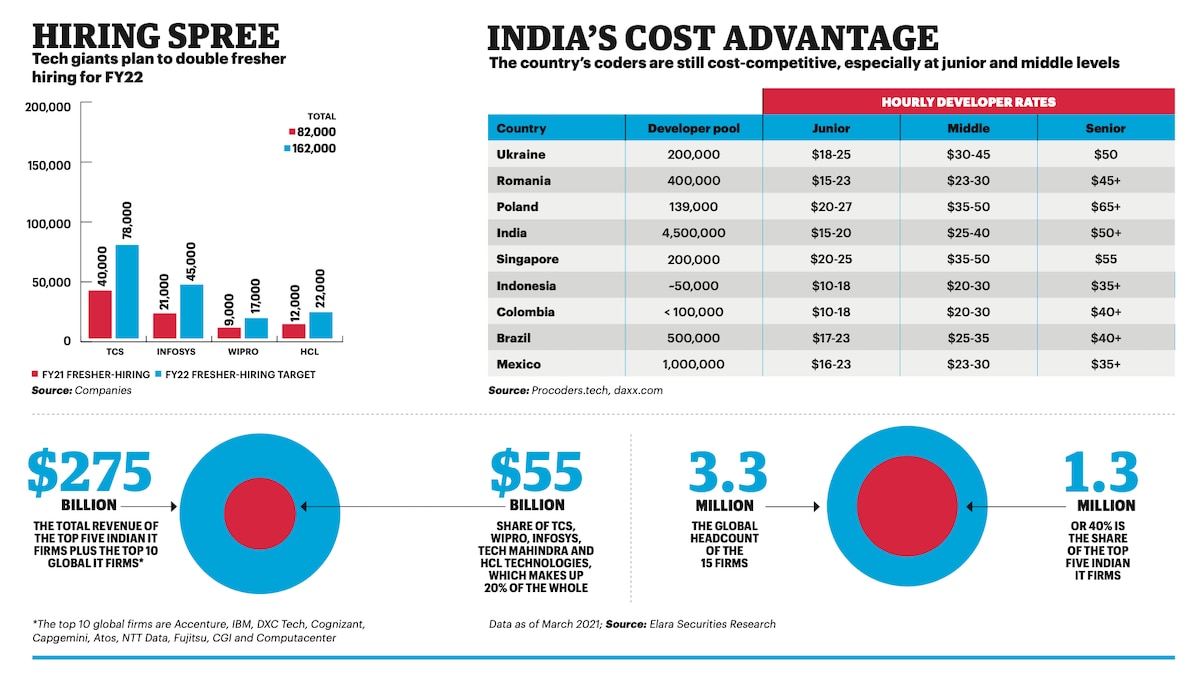 That is not to say there aren’t any other options at all. “While India still leads as a favourite destination for sourcing, there are other countries that are fast becoming emerging locations,” says D.D. Mishra, Senior Director Analyst, Gartner.

Eastern European nations, especially Ukraine, Poland and Romania, are featuring a lot in discussions on high-end software development, several experts concurred. “Their IT outsourcing salaries are 10-50 per cent higher than that of Indians. But their productivity is also high. Ukraine and Poland are the two Eastern European countries where high-end software development is going on,” says Jigsaw Co-founder and CEO Gaurav Vohra. The e-learning platform offers digital training to 30-odd firms, mostly in IT, retail and banking.

Ukraine, especially, has a lot going for it: a large number of coders in C, C++, Java, HTML and Python, which are still in demand; English-speaking graduates in an otherwise non-English-speaking country; developer rates averaging similar to India’s; and a penchant for working long hours. Adds Sanju Ballurkar, President of Experis IT, a recruitment firm: “Its geographical location covers both European and US time zones nicely, whereas India is on one end of the globe compared to the US. But Ukraine is miles away from India in scalability.”

Similar is the case with Poland and Romania. The latter, where several MNCs have their teams, brings quality data science skills to the table, experts say.

But IT industry veteran and Happiest Minds Technologies Executive Chairman Ashok Soota is quick to point out these 10-odd countries together don’t even add up to a third of India’s talent pool. “The Eastern European manpower costs are exceedingly high. So, they are not a concern. Vietnam, you might say, yes. But they have a language problem and their talent pool is limited, too.”

The Philippines’ strength lies in voice-based support services rather than STEM skills because of their English-speaking competency. It is true, however, that India did lose out on some BPO market share to the archipelago. But Soota adds that the market is shifting back to India as those services undergo robotic process automation.

China and the Rest

The only other country with a scale to match India’s is China. In fact, China and Malaysia have also held on to their second and third spots on the Kearney GSLI since its inception. But the world’s most populous country’s tech talent pool is mostly intertwined with its own domestic market whose requirements are in Chinese. “A lot of Chinese professionals are learning English, but their language skills are still poor. They even code in Chinese. Most of our companies in China have not been able to scale up their centres because of the geopolitics, the regulatory environment and the language barrier. That’s why it may not be preferred by global companies either,” says Sangeeta Gupta, Senior Vice President and Chief Strategy Officer at IT industry body NASSCOM. Gartner’s Mishra says China-based firms have grown their market share significantly last year, but adds that their salaries are the highest in Asia.

Latin American countries Colombia, Brazil and Mexico are also emerging IT outsourcing centres, although the developers mostly speak Portuguese and Spanish. Latin America mostly offers a bunch of generic skills which features on the mid- to low-end of the expertise spectrum, Vohra says.

“In fact, a lot of Eastern European and Latin American heritage companies are expanding their India talent pool a lot more. So is the case with IT/BPO captive centres set up by large corporations,” says Apurva Prasad, IT Analyst and Vice President (Research) at Elara Capital, as further proof of India’s IT standing.

It certainly shows as India’s IT and IT-enabled services exports have steadily risen to $133.7 billion as of 2020-21, according to data from the Reserve Bank of India. The country offers a lot of talent to choose from, given that it produces 1.3 million engineering graduates every year. “That is way more than what comes out of the US, Western Europe, Eastern Europe and Latin America combined,” says Prasad.

Despite skyrocketing salaries and the struggle to retain talent, IT firms and banks—the biggest utilisers of the country’s technology talent—deny that they are looking to hire employees from overseas.

Axis Bank, which has a 1,000-member-plus technology team, has been addressing the talent war by hiring people from smaller towns to work remotely. “When we started hiring freelancers under our GIG-A programme, we realised there are some countries where talent is available extensively. We also realised there is enough talent available in Tier II and Tier III cities. Hence, we are not in a hurry to explore talent from across borders,” says Rajkamal Vempati, Axis Bank’s Head of Human Resources.

Satisfaction with hires from smaller towns as well as possible tax implications has kept the private lender from exploring options abroad. But it could change six months or a year hence, she adds.

Infosys Chief Operating Officer Rao, in the earnings call mentioned earlier, also categorically ruled out going talent hunting for its India centres in Eastern Europe or elsewhere. “I don’t see any other country being able to provide such kind of talent with scale,” he said.

PwC India Partner Chaitali Mukherjee, who leads its People & Organisation and HR Transformation practices, says companies haven’t yet begun hiring tech talent from other countries as a way to counter the high costs here, but she says if the attrition continues, client countries may start creating alternate pools of tech talent. “The Philippines, Malaysia and Romania already have process centres for companies. They would only need to build IT capabilities additionally. The movement from process to tech might be easy.”

Other Asian countries can also pick up a cue and build IT capability. “Companies may not move support, local and technology hubs from India to China, but they could create a hub of many countries like Bangladesh, Sri Lanka and a lot of Middle-Eastern countries. They could pick up the skills quite easily. It’s just about them realising it and us taking too long to adjust ourselves. This will require a massive push and it has to come from the top as well,” says Mukherjee.

Meanwhile, Indian IT companies have been trying to fight attrition by doubling their fresher intake. With highest attrition in the experience bracket of 3-7 years, their strategy is to hire and train freshers to deploy them into projects quickly. TCS, Infosys, Wipro and HCL Tech have together committed to hire 160,000 freshers for 2021-22, upping it from the earlier projection of 120,000. In comparison, they hired 82,000 freshers in 2020-21. Besides, fresher salaries have not changed a lot over the past decade, so the cost advantage continues, says Elara’s Prasad.

Clients of the outsourcing companies are also willing to re-negotiate costs wherever higher-end skills are needed and some companies are equipping people from adjacent areas with the necessary skill sets, too, says NASSCOM’s Gupta. Ballurkar, whose recruitment firm has been working on a number of hire-train-deploy models for customers, says his company imparts cloud or cybersecurity skills to people with programming skills. “We are training people even in .NET, which was an old skill. But a lot of companies are finding it difficult to find Java and .NET resources.”

Besides these measures, companies also have to re-assess their value proposition through enhanced employee experience, mentorship support, wellness programmes and, of course, skilling as they work towards getting attrition under control over the next 6-9 months, experts say.

While the ebb and flow in the demand for IT talent is fairly cyclical, the pandemic has brought into sharp relief the need for organisations and their workforce to upskill pronto.

Skilling, upskilling and reskilling of the workforce in relevant areas is the best way to guard against any imminent threat, although the emerging hubs pose no risk to India’s tag of the world’s outsourcing hub, stakeholders say.

In fact, Kearney’s 2021 index introduced a digital resonance metric to score countries on their digital skills. “This report should be a moment of reflection for countries such as India, Malaysia, Indonesia, the Philippines, and Vietnam...Traditional heavyweights are falling behind on digital resonance and should view our analysis as a call to action to re-evaluate their digital investment strategies,” said one of the co-authors of the report. The changing digital focus could also mean more success for Singapore, Germany, Sweden, the Netherlands, France, Canada and Israel, the author pointed out.

NASSCOM’s Gupta also says the other emerging hubs are no threat to India as long as we upskill our talent pool, especially at the entry-education level. But there is a caveat. “If we don’t act, then obviously they pose a threat. These countries may not be able to compete with India on scale, but they can compete on skills.”