Nicola Mendelsohn, Vice President of Global Business Group, Meta, explains how the company plans to deliver growth to advertisers despite Apple's moves and tough global conditions, and why she is excited about India

Nicola Mendelsohn, Vice President of Global Business Group, Meta, explains how the company plans to deliver growth to advertisers despite Apple's moves and tough global conditions, and why she is excited about India

Nicola Mendelsohn, who heads Meta’s global advertising business, is bullish on India. The country has a lot going for it, such as the creator economy and messaging, says the Vice President of Global Business Group, Meta. And while the company is exploring new revenue streams, the advertising business is facing headwinds. For instance, Apple’s privacy moves will cost Meta $10 billion. Not to mention Apple imposing a 30 per cent “tax” for boosting posts. Meta has also seen its profits decline in recent times. Mendelsohn, 51, in an interview with Business Today’s Sourav Majumdar and Abhik Sen, talks about what Meta is doing to counter Apple’s moves in the advertising arena, privacy, the creator economy, monetisation plans, and why India is an important part of the story.

Q: How do you sell the metaverse to advertisers? Q: Will it be easy for Meta to monetise all this?

A: That’s not how we think. We think about what are the indications of where the technologies are going. And if you go back, that’s the way that we’ve always operated as a company. When Facebook was first created, we sent messages to each other. Then we went from words to pictures, to video, then we got live video. Now we’re in Reels… We’re starting to see some AR coming in… and then it will be VR. But it won’t stop everything else. It will be a blend of things. People will access the metaverse in a 360-degree environment, but they’ll also access it in a 2D environment. So we’re focussing from a monetisation perspective on the things that we can do today. The bets that we see in the near-term future [are on] Reels, which is one of our fastest-growing products. Twenty per cent of all the time that’s spent on Instagram is spent on Reels... [Then there’s] messaging… That’s a very big opportunity given that we now see a billion messages a month going between people and businesses.

Q: Are these messages essentially on WhatsApp?

A: Well, it’s on WhatsApp and Messenger and Instagram Direct—it’s three different areas. And when we think about India in particular, all of these areas are exciting because there’s a lot of innovation that’s happening [here] and we’re investing in that. We’ve heavily invested in India for Reels. Other countries look to India, as to the examples that are being created here by the creators and also by the brands that are starting to utilise Reels.

Similarly, [this is] true with WhatsApp. India is a WhatsApp-first country. It’s one of the main ways people communicate with one another, [and] also one of the main ways that people and businesses are now talking to one another. So, this is where we’ve been investing when it comes to imagining new ways that you might utilise the platform. If I take our investment in Jio, and our partnership with JioMart, this was a world-first in India… [and] the rest of the world is looking to understand and say, ‘I want one of those’. We want to take that example and see what we can do with it elsewhere.

Q: Are you looking at more innovations like JioMart-WhatsApp coming out of India?

A: The answer is yes… you can see it across verticals about how you might adapt and take the same learnings and thinking, and then see what you might do accordingly… So it’s very early days, but it’s certainly exciting.

Q: How difficult a market is India to crack?

A: I think there’s something very exciting going on in India… I’ve been here many times over the years… [and] everyone I’ve spoken to, from the smallest business owners to some of the biggest business owners in India and everybody in between, creators, etc.—there’s a collective dynamism, energy, excitement... More and more people are connecting to the internet, buying online. We see innovation here, we see creativity… you’ve got these new types of businesses [like the creator economy] that just a few years ago, you couldn’t have imagined. So, we see this as a really exciting and dynamic market.

Q: Globally, it’s a tough environment. Meta has seen its profits decline as well. What do you see as the key headwinds for the company?

A: In general, [there are] different headwinds for different businesses around the world, and being a global business, we see these because our partners tell us. We still see the effects of the pandemic around the world… [there’s] the energy crisis in certain countries and also the war in Ukraine. Many different things are impacting businesses. But what CEOs and CMOs tell me is that they are focussing on growth. They see us as a very important partner to be able to help them achieve their growth ambitions because we can give them access to the people that matter to them because of the reach of our platforms—whether it’s Facebook, Instagram, WhatsApp or Messenger. They see us as the very best platform to give them the strongest ROI when it comes to looking for that growth. So that’s what we’re focussed on as a business… in making sure that we’re able to translate the strategies that they have, the desire to target the [right] people, and ultimately help them to deliver that growth.

Q: What are the new advertising opportunities that you see as you roll out new products and innovate on existing ones?

A: Definitely Reels. We’re just starting to see the monetisation of that with things like collaborative ads, or the work that we’re doing with creators in that space. We also see this explosion of video that Reels is a part of as well on our platform, and how we can help brands... And I think we need to be helping our advertisers to understand better how to adapt their own creative work to be able to fit into these different formats.

Then we’re seeing some real excitement around messaging overall. We’re only just starting to monetise WhatsApp. That’s really early days for us. And we’ve created some new products, like Click to WhatsApp.

Q: What would be the typical WhatsApp revenue model? Will we start seeing ads on WhatsApp?

A: I want to be careful of even using the word ad, because I think one of the successes of our platforms is that we want our advertising to be native to the individual platform… One of the things we have at the moment is Click to WhatsApp. So you can be on Facebook and [it can] literally take you into a thread on WhatsApp. All types of businesses are organically already working on WhatsApp… we look at what the current behaviours are, what people are doing, how they’re reacting and interacting with businesses, and then we’ll look to see how we can create different solutions for larger advertisers as well.

Q: We’ve seen changes in Apple’s privacy policy that will hit your business. How do you plan to overcome that? 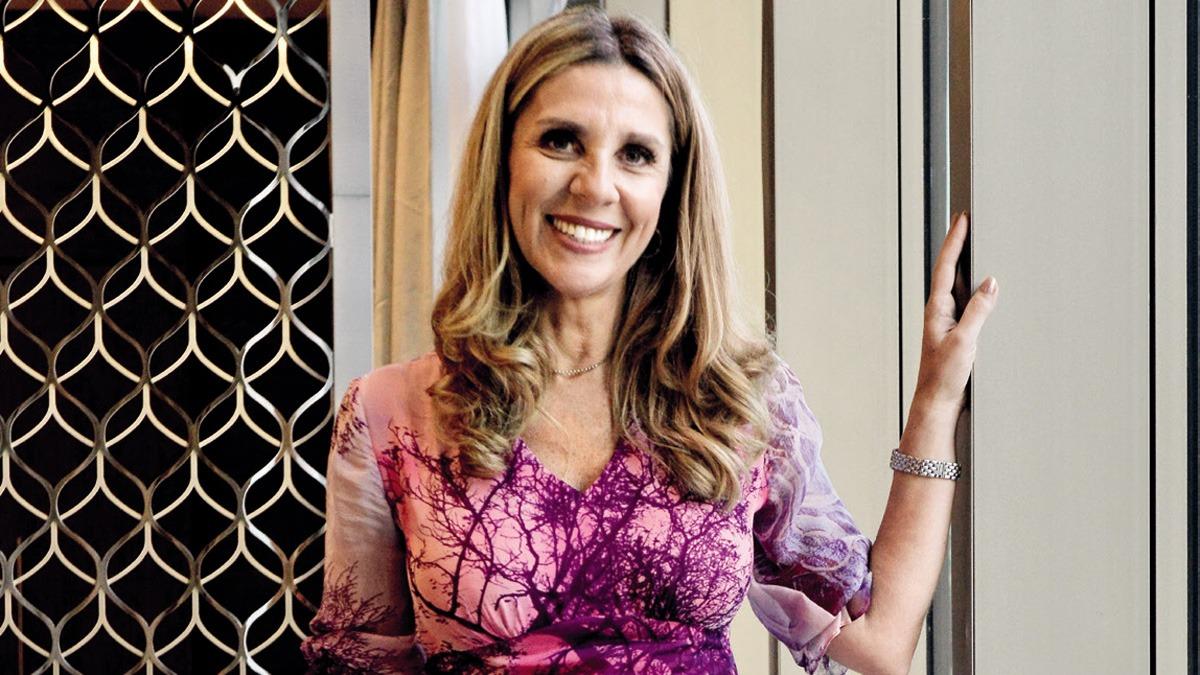 A: We’ve been very vocal for a long time about the fact that what Apple did has really had a disproportionate effect on all businesses around the world—not just ours—and especially small businesses. And it’s been very clear that Apple wanted to create an app business. And they have. And they don’t adhere to the policies that they make for everybody else. That said, we’re doing a number of things. We’ve been doubling down on privacy-enhanced technologies, so that we can do more with less data going forward. We already give strong ROI to our advertisers, but we want to continue doing so. We’re also doubling down on the investment in AI. There are two parts to this: one is what content we serve to people. And the other is what advertising we serve. By using AI, we’re able to serve the best ads to people, which is good for them and also good for the advertiser. Plus, we’ve been talking about the new formats that we can offer to advertisers in terms of how to communicate.

Q: Talking of privacy, do you think there is an inherent contradiction between your advertising models and the privacy aspect?

A: This [privacy] is something that we take very seriously. Anybody on the platform [can] do a privacy checkup. You also have the option when you see an ad from somebody, you can literally click on the top right corner, there’s a feature saying, ‘why am I seeing this ad’, and it will explain it away. And then, if you don’t want to see ads from an advertiser, or a category, you have the option to be able to do that. These are the sort of things that we’ve built over the years into our platforms, because we know it matters to consumers. And so it matters to us as well.

A: I honestly think it’s too early to say, but what is clear as we move into Web 3.0 [is the disruption it will bring]... Klaus Schwab, at the World Economic Forum, said that we’re at the dawn of a fourth industrial revolution. And if you look back on the previous industrial revolutions, I think it’s disrupted every aspect of our lives, not just advertising. I think we’ll see another very exciting disruption. And you’ve seen from the vision our Founder is setting out [is] that we want to be one of the companies that’s playing a part in doing that. But we won’t do it alone. [We’ll do it] with other companies, NGOs, governments and creators. What’s different is that this time Web 3.0 will be built by creators.

Q: What are the key areas where India will play a role in the evolution of Meta?

A: I think it’s about the disruption already that Indian creators and the Indian creative economy is having … So many of the top-followed people on Instagram don’t live in the major cities. That’s a disruption on the Indian economy itself... But they’re not just influencing in India, they’re influencing in other parts of the world as well. We see things like the dance crazes, comedy and fashion now starting to come out of India and going to the rest of the world. That’s where the difference lies this time around. And that’s why it’s really an exciting time to be in India.

This interview took place before Meta announced its Q32022 results